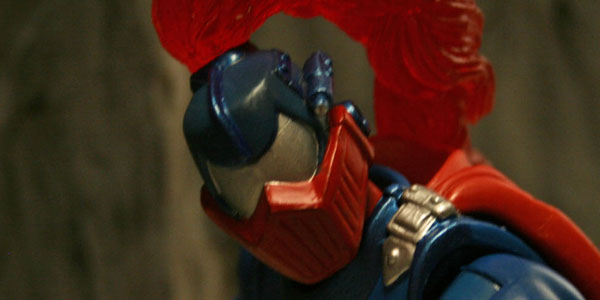 Sir Laser-Lot is the lone August release for Masters of the Universe Classics line. Given how polarizing The Mighty Spector was, one can expect the same of SLL. He is the creation of DC Comics head honcho Geoff Johns, and much like Spector, SLL is the from the imagination of Geoff as a young child, rather than the collective intellect of the man he is today. This may help or hurt the character from a creative standpoint, but does it translate well into a toy in this particular line? Read on.

Laser Lot is a knight from Preternia, serving under King Grayskull, and brought to the future by Marty Stu TMS to aid the heroes of the future.  Outside of his cardback bio, he had one other media appearance in the form of the first MOTU digital comic, which was dedicated to him. It very much helped flesh Laser Lot out as a skilled warrior, and gave fans wanting not only more about the character, but an alternate toy head, as we get to see him unmasked.  Logistically, I couldn’t fathom someone from a hi-tech age pulling the equivalent of a caveman or feudal fighter in their time to train their warriors, but maybe I am not suspending disbelief as I should. As of now, the comic nor bio haven’t endeared him to me in the slightest.

As a toy, Laser Lot is nothing more than hues of red and blue, with occasional metallics thrown in, and the blue is overwhelming. Many eagle-eyed fans rightfully suggested that the figure use He-Ro’s pelvis piece to give him a proper belt and break up the monochromatic body, but Geoff didn’t want this for his character, so the majority have to suffer for it. While I understand this is Geoff’s baby, this toy is going out to thousands of subscribers who give valuable feedback. Geoff’s choice isn’t any more ugly, but I thought the fans’ suggestions were right on the money this time. The red that breaks up SLL slightly is all in his gloves, boots, cape, plume and the Gem of Talmadge centered on his chest. Oddly enough, one would expect the gem to be translucent like a crystal, but that translucent plastic went to his …energy plume? I don’t understand that at all, as a design choice or otherwise. It appears that maybe the plume was tooled along with his energy mace and sword, which incorporates the same plastic. His other weapon is his shield, beautifully designed by the Horsemen. The motif is a knight, but I was hoping that we would see other knights like Extendar and General Sunder first… SLL will hopefully soon be in excellent company. 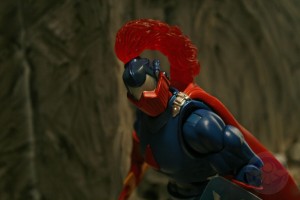 The issues I find with this toy lie not only in the design, but in the cutbacks as well. He lost a few paint apps, most notably on the back of his tights.  The front has a metallic blue, while the back is unpainted, since it will be obscured by the cape, presumably. What I find hypocritical about this choice is that the brand manager made a comparison of Mattel’s products to Bandai America’s “crappy” Thundercats toy line. While as a fanboy, I agree with the characterization– a hallmark of Bandai America that I find “crappy” is that THEY DON’T PAINT THE BACKS OF THEIR FIGURES. But here Sir Laser Lot (and it seems Frosta) loses paint apps the same way. If I am not fixing their toys from the rampant part swapping, I now find myself having to paint them, too.  Worse still, the toy had no hopes of being as dynamically displayed as he is in the comic, between his un-painted back half and the cape which hinders a lot of his posing. 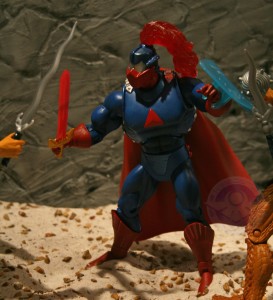 SLL also uses the same black plastic that plagued Vykron and Spikor, making many hesitant to move them and give enough rub on the parts to scrape off the paint. Scott Neitlich, in Mattel’s defense, has said that the paint isn’t the issue, but rather the vendor not allowing the paint to dry sufficiently before packaging. There is certainly truth to it, since the gold paint on the sword’s hilt that was packaged in Laser Lot’s right hand bled right onto it when I pulled it right out of the box.

In short, this toy suits the needs of very few people. It’s a 30th Anniversary character, and new blood in the property is a welcome thing for someone like me. That said, we want holes filled aesthetically. We have a few knights already in the mythos, something other unique characters like TMS don’t suffer from. His weapons are powerful, albeit generic, and lack the 80’s charm of the line’s design cues. From the comic, we learn a bit about him, which helps a character with zero nostalgia or attachment working against it, but visually, what is translucent shouldn’t be, and what ought to be, namely the gem, isn’t. When you have a character that is being shoehorned into a beloved property, they need an interesting design or a compelling story, and as of now, Laser Lot has neither. Coupling that with a toy i am scared to pose due to paint rub and a restrictive cape, this is a toy I can recommend only if you are a completist, or really like knights, or if you’re a fan of Geoff Johns. If for anyone else, he will be kind of… there. No longer a Preternia character, at least Laser Lot can be a shelf-mate for TMS and the upcoming King He-Man. I don’t know if that’s worth $20, but maybe the $12 my friend sold him for on Ebay.