I’ve made my distaste of The Walking Dead known time upon time while writing these things, but I have been a fan of zombies in the past (mostly in video games) so at first I couldn’t understand why I had suddenly become so disenchanted with one of the most influential horror subgenres of the twenty-first century, until iZombie came along. At first, I believed it was the fact that iZombie was funny that drew me to it, but as the Walking Dead continues to drag on I realized that all zombie stories are basically about entropy. Everything dies, everything degrades, and all people for lack of a better term are essentially upright beasts. There was a time when this cynicism was profound, but now there’s so much to be angry and sad about that tuning in every Sunday to feel 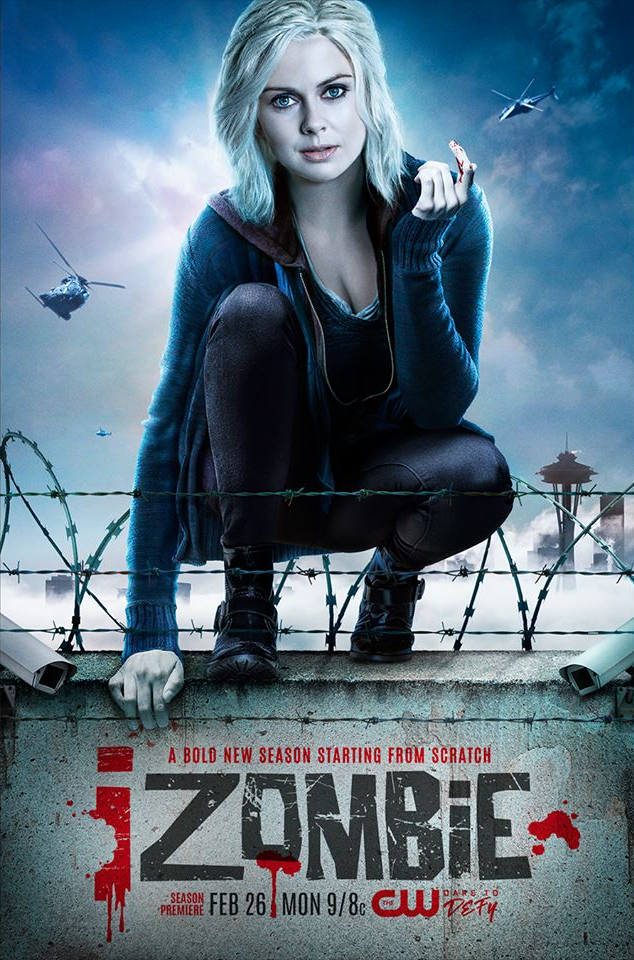 something that you already feel when you go to work or read the news is just exhausting. iZombie: All the great zombie flavor, with none of the human waste.

I’ve always liked iZombie or at least I was invested enough to continue to give it a shot when it dipped, but the end of season three was a quirk that zombie stories don’t usually bother with. The world of iZombie was irrevocably changed since the existence of zombies became common knowledge and Fillmore Graves was forced to infect a large percentage of the population in order to avoid extinction. A large-scale decidedly evil plan that actually succeeds with the characters then living in and evolving in the new normal. iZombie is different because it isn’t about entropy, the characters adapt and maintain the world in the face of entropy, they don’t surrender to it.  Regardless, the story still integrates the ever degrading state of the people by highlighting the changes that the society has undergone since Fillmore Graves’ takeover of Seattle. It’s not boring nor is it happy-go-lucky, it’s constantly fluctuating. The new iZombie dynamic naturally evolves as their new society experiences problems that weren’t there before including zombie gangs, brain shortages, human and zombie relations, fear of nuclear retaliation, and even the spread of zombies outgrowing the human population. All of which are new issues to the fledgling zombie/human Seattle and it leads to a completely different dynamic when Liv and Clive investigate a murder.

This is a pretty standard mystery for a season premiere, it doesn’t even have a very significant or terribly interesting solution, but it works well enough to introduce the audience to the new iZombie world. Now when Clive and Liv go to interview family members, she’s not the eccentric goth girl helping the police, she’s a zombie who ate a loved one’s brain and is now doing an impression of them. Now that people know what she is, they genuinely fear her and are reluctant to allow her in their home. It’s a far more sensitive situation than before that came up multiple times and I was shocked to find that it actually made me uncomfortable, which proves how effective the presentation of the new normal has been.

Final Word: Even if I wasn’t totally on board with iZombie’s new world (which I am) I was very affected by it. The situations are odd, but they have equivalent context thanks to both strategic cause and effect and world-building. iZombie didn’t have to go this direction. It honestly could have kept things going like before for a least another season without people really catching on, but this is by far the most intriguing place they could have taken the series. There’s a standard episode of iZombie packed in to “Are You Ready for Some Zombies?” which features Liv geeking out on the Seahawks after she eats a superfan’s brain (who also hates zombies, so that’s kind of interesting,) but it’s far more about iZombie’s highly fictional Seattle being scarily relatable. All the characters are finding places in the new world, whether that place is goofy (like Ravi,) prosperous (like Blaine,) or uncomfortably grim (like Major;) there’s not a single bit of iZombie that hasn’t changed in new and incredibly original ways. I honestly don’t know what to expect from iZombie going forward, and not being able to predict the course of a story about zombies is a luxury I didn’t think I would ever have again.