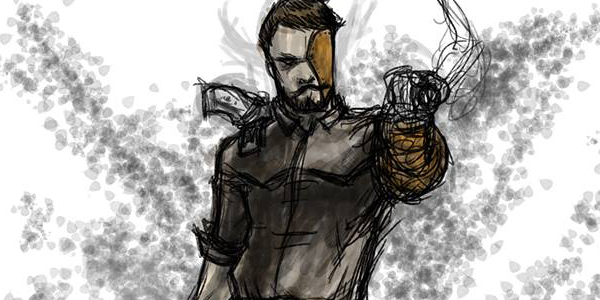 After months of waiting Jack Rider has arrived!

In comic books we have capes, cowls, and powers that dominate the weekly pick list of many. Very few people stray from what they are used to, but every now and then something comes around that makes you give new things a chance. Mike Hopkins has done just that.  Who is Mike Hopkins you say?  He is one of our editors at Kastor’s Korner and has fulfilled his dream of putting out a book of his own, along with the art from Nate Getz.

Jack Rider takes place in the old wild west (1854 to be exact). The book starts off with an old fashioned train heist and our hero, Jack Rider, is a marshal guarding precious cargo. This is where Hopkins transports us out of the normal west and into a more sci-fi Jonah Hex style of book. We see the mastermind of the robbery, a cloaked figure, draining the life out of one of the robbers. The robbery then takes a turn and our hero is caught in an explosion.

Hopkins flashes us forward to the aftermath of the explosion, Jack is in a hospital bed missing an arm, a leg, and half of his face. The doctor gives a grim diagnosis to Jack’s wife and child, and this sparks the mysterious figure’s interest in him. The figure can take different forms and assumes the form of the doctor to recruit Jack for his mission.  It turns out the mysterious being is really an alien ruler from another planet named Tharos. Banished to Earth, he needs Jack’s help to retrieve an item to help him get back. An unlikely partnership is forged and Jack must get the item for the promise of becoming whole again.

I liked the story and characters, it was something different. I also had the honor of previewing what Mike has in store for the second book, and really hope he gets to continue because is story mixes into many genres. I also feel that this has TV show written all over it, and with the right backing it can get there. Mike’s writing is nice and the story flows and the clean pencils from Nate really do a good job.

Jack Rider #1 is available in digital format and will be available on hard copy in a couple weeks.  Go to their Facebook page to show support and pick one up today!