Jackie’s Back With Some New Tricks in Darkness II 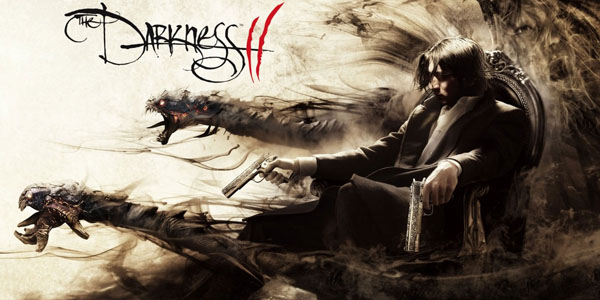 When Starbreeze Studios released The Darkness on consoles in 2007, they successfully breathed new life into an aging license. Now, five years later, the sequel sports a new developer, a reworked control scheme, and radically new visuals. The result capitalizes on the strengths of the original source material while providing, for the most part, an extremely entertaining experience.

Penned by Paul Jenkins (who worked on the original comic series) and developed by Digital Extremes, Darkness II takes place two years after the events from the first game. Jackie Estacado has become the Don of the Franchetti family and has learned to keep his darkness powers at bay. As the opening monologue suggests, however, he continues to be haunted by the murder of his girlfriend, Jenny, from the prior title. After a brief introductory cutscene, all hell breaks loose and Jackie is mortally wounded by the Brotherhood, an ancient cult obsessed with harnessing the Darkness power for their own purposes. Near death, Jackie is forced to unleash the repressed demons inside to heal his wounds and decimate the enemy forces.

Right from the get-go Jackie is immensely powerful, with all of the basic offensive maneuvers available immediately. In a great twist on the traditional first-person shooter interface, Jackie has control over four limbs– his two arms and two demonic tendrils that are poised menacingly on each side of the screen. The trigger buttons are used to control Jackie’s hands, wielding one or two guns and firing them both independently. The left shoulder button controls the left Darkness tendril, which can pick up pieces of the environment to hurl at foes and even grab enemies themselves. The right shoulder button can be used in conjunction with the right stick to swipe the other tendril horizontally or vertically to slice through obstacles and bad-guys alike. It’s actually a very intuitive and fulfilling mechanic that allows you to wreak some real havoc. There’s a sense of how any number of random fights in the game may play out– swipe at a foe with your right tentacle to stun them, grab them with your left and, while they’re dangling helplessly before you, choose one of several different types of execution types with the face buttons to dispatch them in a gloriously disturbing fashion (like the “wishbone” execution which lets you pull both legs in opposite directions until your victim literally tears in half). Take it a step further and order one of the demonic appendages to consume their heart for a health boost before pulling a door off a car to use as a shield or perhaps hurl at another foe with lethal force– all while blasting away with guns akimbo. 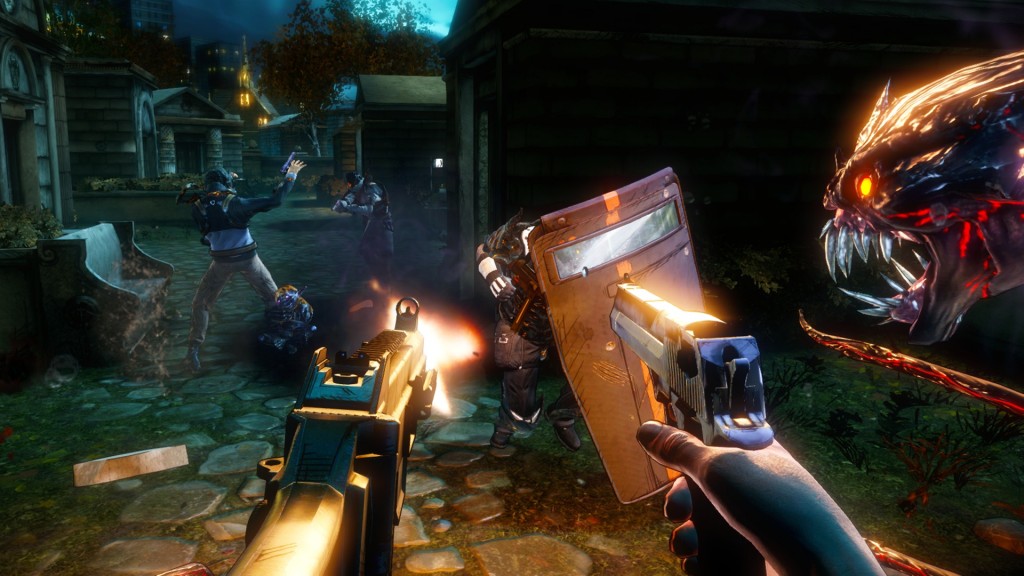 The only thing that stands in the way of feeling too overpowered is Jackie’s debilitating sensitivity to light. Waves of gun-toting villains will often be accompanied by soldiers carrying shoulder-mounted spotlights. Should their beam find you, the Darkness will hiss and regress back into Jackie, shrieking (as only voice actor Mike Patton could) for an escape from the light. As long as their spotlight or any other ambient light from the game rests on Jackie, you are unable to use any of your Darkness powers or heal yourself. In addition, the screen is blurred and a high-pitched ringing is present, really driving the point home that the light is extremely painful to the dark entity inside you. This forces you, especially on tougher difficulties, to make shooting out light sources a priority to avoid being overwhelmed. Once shrouded by shadows, however, you can really let loose and tear small armies asunder. This game truly makes gratuitous violence an art form and has a solid combat system in place that makes it an absolute blast to carry out.

It’s a wonder then why the developer felt the need to continuously and purposely slow the action down with long sequences of meandering dialogue. Don’t get me wrong– I enjoyed the story they were telling which, at times, was actually quite heartbreaking. What I could do without though, were the areas between missions that found Jackie either back at his mansion or trapped in a darkness-induced hallucination of an insane asylum. Here, you are tasked simply with walking to a series of people-of-interest and carrying out discussions that move the narrative along. Much of the story (which largely explores Jackie’s failing grasp on sanity and inability to cope with the loss of Jenny) could have been accomplished more efficiently and with more style by simply animating these sequences as rendered cutscenes. It speaks volumes to how fun the combat areas of the game are that, whenever I hit one of these plodding “in-between” runs, I felt like an addict longing for another action fix. 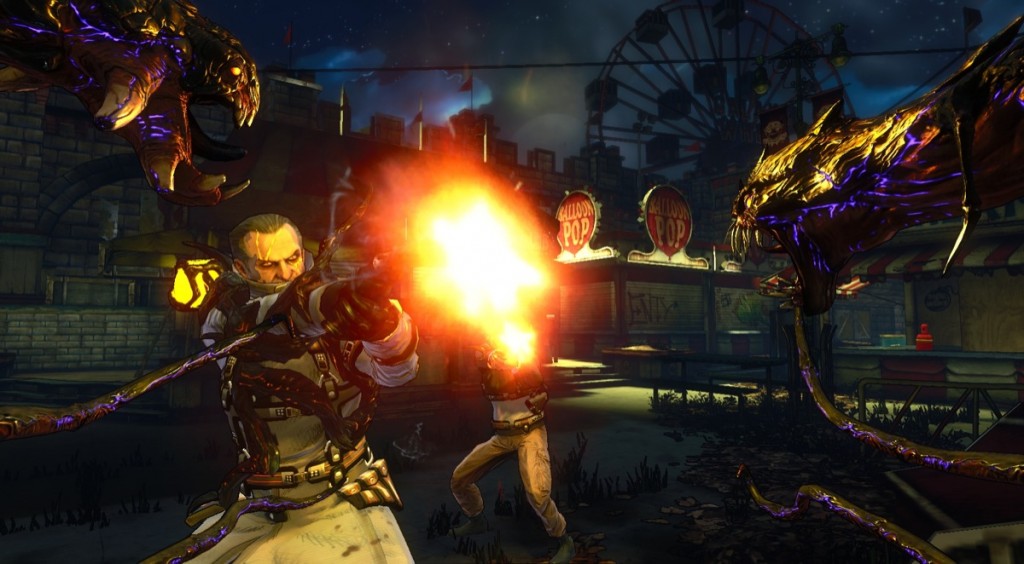 Although the visuals are very strong, the game’s environments themselves are often mediocre. Subway tunnels, creepy carnivals, and cemeteries have been done to death– there’s even a sleazy strip club present to make sure they really earn that “M” rating. Worse yet, all the areas are extremely linear, offering little choice in how you progress through the story. Still, the graphics were significantly retooled from the original game, now featuring a heavily-inked, cel-shaded look that more closely resembles comic panels. It’s a shame that, given the cool character models, all the enemies are carbon copies of one another with very little to differentiate between them. Although I had heard mutterings about game-breaking bugs upon its release, I can happily say I did not observe any frame-rate drops, freeze ups, or collision detection errors during my sessions.

The experience system in Darkness II is also very much improved and awards you XP points for more creative kills. The game grants several times’ more XP for dismembering a foe with your demon arms rather than simply shooting them. These points can be traded in for upgrades from four branching skill trees– increasing a number of stats including the amount of health received from devouring hearts, the amount of ammo that can be carried, even granting cool new powers. It’s a great way to keep players coming back for multiple runs through the game to max out all their skills. The biggest improvement over the first game, however, is the Vendetta multiplayer mode. The original including a very tacked-on, mediocre deathmatch gametype which, frankly, was awful. This title provides a fun co-op component that pits you and your friends against waves of enemies as you work your way through missions that actually tie into the single player game. If you’re the anti-social type, you can also play through all these missions solo.

With all the entertainment value contained on the game disc, you’d think it would be an instant purchase, but one thing holds me back from recommending that you run out and buy a copy: the length. The campaign in this game is incredibly short-lived and can easily be completed twice over a weekend, including a run through the multiplayer portion. Even with the difficulty maxed, I had little trouble blasting through this one pretty quickly. Unless you want to wait for the price to drop a bit, it’s unfortunately just not a great investment for the amount of content present. For any fan of The Darkness comics or action games though, this may be one of the best rentals around (especially since you don’t need one of those pesky online passes to access the multiplayer features). You can find Darkness II on shelves now for Xbox 360, Playstation 3, and PC.