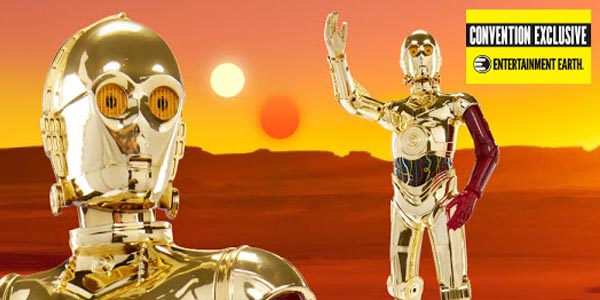 Everyone’s favorite Protocol Droid is coming to Comic-Con, as the latest new figure in the Star Wars BIG FIG collection by Jakks.

We’ve known that C3PO was joining Jakks’ BIG FIG lineup ever since Toy Fair, but before the red-armed droid surfaces at retail, Jakks and Entertainment Earth are teaming up to offer a special edition version of the figure at San Diego Comic-Con.

This 18″ 3PO sports a metallic finish, the red arm that he sported in Star Wars The Force Awakens, and comes packed in a very nice window box.  Honestly, having seen both this and the gold painted C3PO at Toy Fair, there’s just no contest– if you’re into Jakks’ BIG FIGs, this is THE 3PO to get.

The only place to get this guy is at Comic-Con… unlike most of Entertainment Earth’s other exclusives, which non-attendees can purchase at EntertainmentEarth.com, 3PO will ONLY be sold at the show in San Diego. 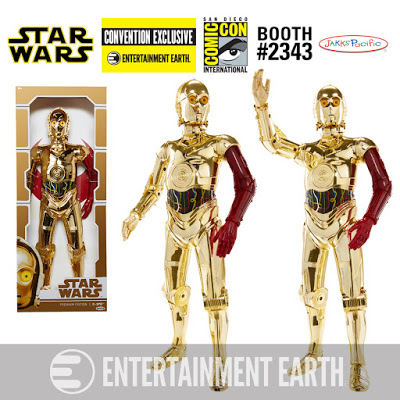 The Rebel Alliance and Resistance’s most loyal protocol droid has a new look – and you may not recognize him.

But not to worry, with the Star Wars: The Force Awakens Premium Edition Vac-Metal C-3PO 18-Inch Big Figs(TM) Action Figure – Convention Exclusive, this loyal companion will become a familiar friend.

Fresh from the Battle of Takodana, C-3PO sports his recognizable shiny gold finish, along with a red arm he wears to remember the fallen First Order RA-7 protocol droid named Omri.

Measuring 18-inches tall, this is the first Threepio action figure at this scale with his metallic finish.