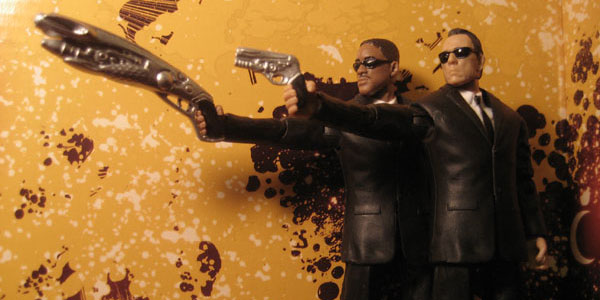 Men In Black 3 is one of those Summer movies I keep forgetting about. The long-delayed project has been talked about and scrapped so many times the idea of it actually being released seems like a foreign concept. The fact that it’s finally hitting the big screen got a little more concrete this week, as the Jakks Pacific MIB3 action figures started finding their way to retail. And while I have very little doubt the latest adventure of Agents J and K will be awful, the toys are actually pretty neat, for a number of reasons. 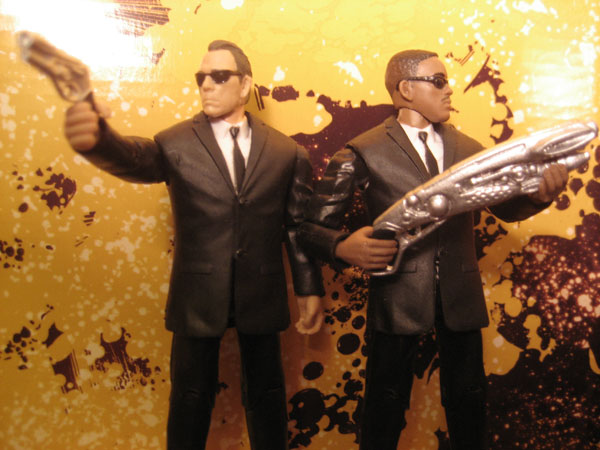 I’m not particularly looking forward to Men In Black 3. I actually really loved the first movie, which was filled with director Barry Sonnenfeld’s trademark black humor, some excellent alien creature designs, and a fantastic performance by Tommy Lee Jones that screamed “cool” in every subtle way possible. Then, Men In Black 2 happened… and the less said about that flick, the better.  I’d like to believe the third installment could pick up where the original left off, but between massive rewrites and staff turnovers over almost ten years, and Will Smith’s very public movie star tantrums while making the film (his star trailer was so big, it closed down an entire block while filming on location in Manhattan), my expectations are pretty much in the basement. 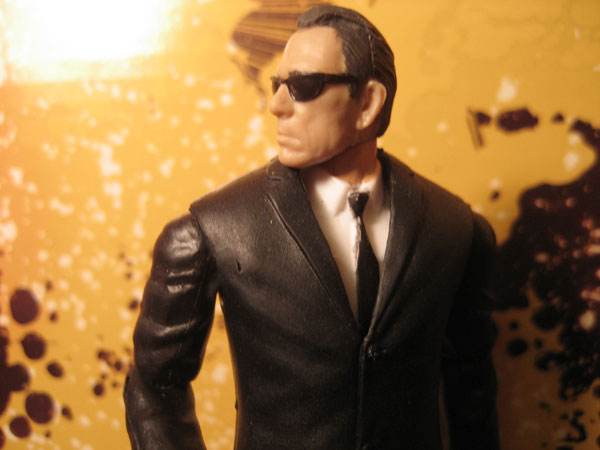 Jakks’ toy line is based on MIB3, but when your heroes’ attire is a black suit and sunglasses, they can be pretty universal for any movie in the franchise. So while the whole series includes J and K, in addition to three aliens, I opted to just pick up the two heroes. The figures are 3.75″ scale, and measure up perfectly with any other like-sized lines such as Marvel Universe or GI Joe, and they’re fairly well built toys. The agents share the same body, which features a ball and socket neck, an ab crunch (hidden under the soft rubber suit jacket), ball shoulders, hinged elbows and knees, Marvel Universe-style peg and ball hips and swivel wrists. It’s a fair amount of articulation, if not stellar. 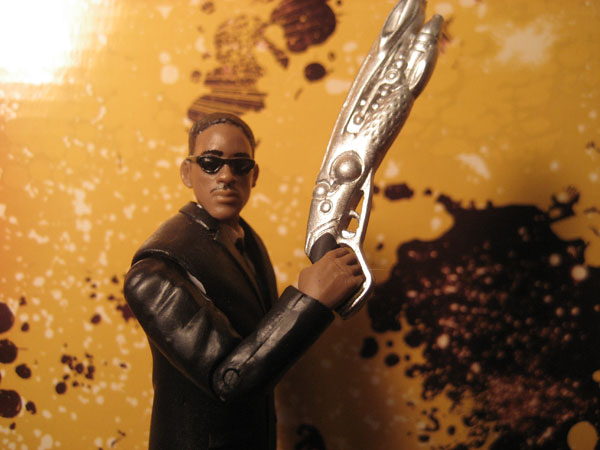 The portraits are pretty good– K definitely look like actor Jones, and while J isn’t the spitting image of Will Smith, he’s close enough to be recognizable. The figures are both sculpted with their sunglasses molded on, which I am hoping will change in future assortments– I’d love to get more “vanilla” face sculpts for both these actors from this line. The overall look of the agents is pretty good, although their shoulders are set a little too wide, giving them a top-heavy look.. and the lack of swivels at the bicep, waist and hips or ankles limits the number of poses each can retain, especially for J holding his Shotgun Fusil in a natural way. The other concern here is some spotty paint apps– I had to go to two different Toys R Us stores, both fully loaded with a full fresh case, just to find a version of each agent that wasn’t covered in slop, or that didn’t have missed parts that went unpainted (including a K figure whose glasses were about 2/3 black and 1/3 skin toned). 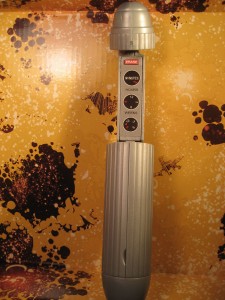 Technical issues nonwithstanding, it’s pretty obvious the Men In Black 3 line was intended more for kids than collectors, and they are actually pretty fun. J and K are available in two different versions: the basic figures (along with three alines) each include one weapon accessory, as well as a kid-sized ring that transforms into a pay accessory for the figure. It’s a cool enough concept, but I guess we will have to wait until the movie to see if this extra gear is inspired from the big screen. On a side note, what is Jakks’ obsession with rings?? Last year’s Pirates of the Caribbean sported rungs with each figure and now MIB does as well. It’s kind of an odd choice, especially for a boys’ line. 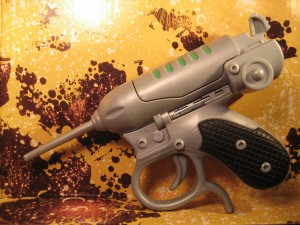 Each agent, along with the main villain Boris, are also available in deluxe sets which include larger vehicles that transform into various MIB agent gear, like the Neuralyzer or the Noisy Cricket. These sets cost about five bucks more, but the role play/ vehicle pieces are so cool it’s clear they are the best choice. I picked up the deluxe J, packed with the Neuralyzer and K who comes with the Noisy Cricket. 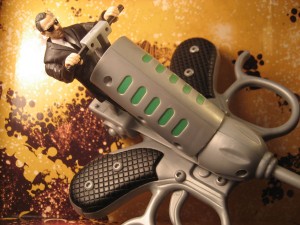 The transforming functions are fair at best– the jet/ sled things each piece of gear morphs into is easy to accomplish in a few short steps, but the result is vehicles that still look like disassembled versions of the original accessories. As such, they are much cooler being left as the role play scale Cricket and Neuralyzer, and each includes an action feature in this mode. The Cricket has a working trigger that activates the sound of the gun firing, while the MIB’s favorite memory eraser has a push-button feature that causes the top of the Neuralyzer to light up, just like in the movies. 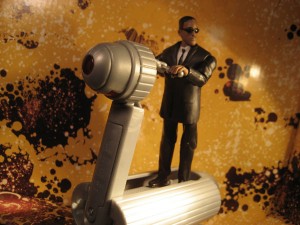 These deluxe sets are quite fun, and considering you get a decent figure and a solid playable movie prop in the same pack for about fifteen bucks, they are an excellent deal overall.At ten bucks for just the figure with a ring, the single pack figures are not quite the same bargain, but I have already seen stores sold out of both J and K. The reason is quite simple– these figures feature a great “man in suit” buck body, and that makes the agent figures a customizer’s dream come true. I hope Jakks plans accordingly and releases case packs of ONLY J and K, as the heroes will not only be the biggest draw for kids but I predict collectors will continue to snatch them up to provide civilian bodies for their Marvel Universe, GI Joe, and whatever other universe created in this scale. It’s a very keen move on the part of Jakks, and it should guarantee some solid sales even if the movie tanks. 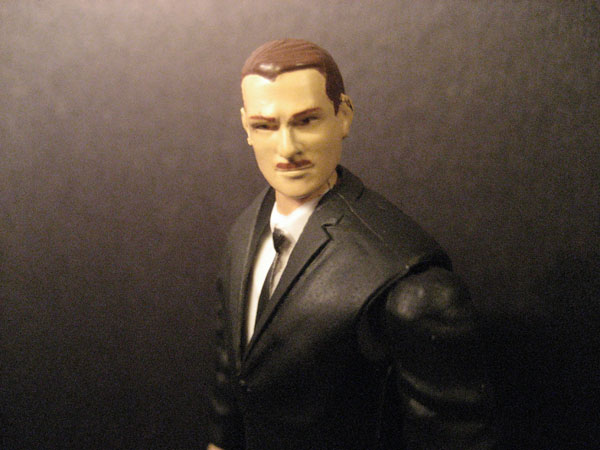 While the ball joint on the neck of the MIB figures is way smaller than most Hasbro figures, it really wouldn’t take much more than some putty to secure the head in place on this body, meaning we can finally all get our civilian versions of Tony Stark, Nick Fury, Tomax and Xamot, and countless other characters across the 3.75″ universe.* 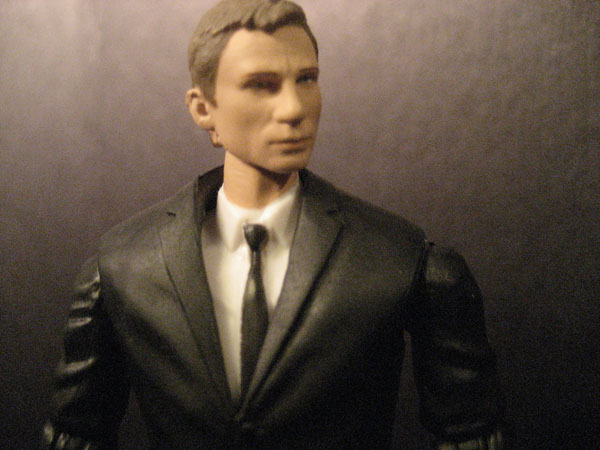 Thriftier customizers may want to wait for the inevitable BOGO sale at Toys R Us, or for excess figures to wind up on clearance, but in any regard, I think Jakks has a winner here. Creating fun, playable and accurate versions of the MIB heroes in this scale is a win all on its own, but providing these figures as a viable base for countless long-demanded civilian characters in other 3.75″ toy lines could wind up making MIB3 one of this Summer’s most successful toy lines.

(*the possibilities really are endless– I’d love to see a die-hard customizer do an entire Star Wars movie premiere diorama using these bodies.. that would be incredible!)