James Cameron Explains How The Terminator Gets Old In Genisys 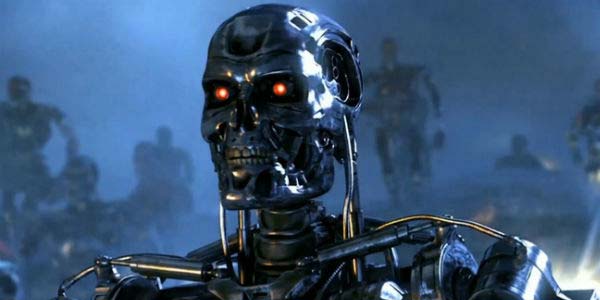 Arnold Schwarzenegger returns to the killer robot franchise in Terminator Genisys… so how does the new movie explain his robot is now 60-something?

As long as there’s going to be a new Terminator movie anyways, I don’t think there’s many of us complaining that Arnold Schwarzenegger is coming back to the franchise.  And now– even though he’s not actually involved in the new film at all– James Cameron has chimed in with how the cybernetic Terminator could appear to have aged twenty plus years to get our new movie where it needs to be:

“[T]he outer covering (of the Terminator) was actually not synthetic, that it was organic and therefore could age. You could theoretically have a Terminator that was sent back in time, missed his target, and ended up just kind of living on in society. Because he is a learning computer and has a brain as a central processor he could actually become more human as he went along without getting discovered.”

So that explains why an Arnold Terminator appearing in Genisys could appear much older than we’re used to seeing (it’s a hell of a lot better than the turkey neck-masking turtleneck used in Terminator 3).  This could also provide a hint to the movie’s plot, which supposedly reboots the franchise by changing what we know about the past/ present/ future continuity.  Maybe young Sarah Connor is the missed target Cameron alludes to?  That would definitely change everything that happens after that, and could suggest an older Arnold would essentially be playing the same T-800 seen in the original film.

The big bummer here though, based on Cameron’s speculation, is it looks like we’ll be seeing Arnold Terminator as a good guy yet again.  With how cool and different Schwarzenegger’s post-political roles have been, I was hoping he’d be willing to go full-on bad guy in this movie.  Maybe he still will be the remorseless and unstoppable engine of destruction I’m hoping to see onscreen one more time?  Maybe Cameron is just referring to a rather negative outlook on humanity in his remarks?  We can only hope, right?