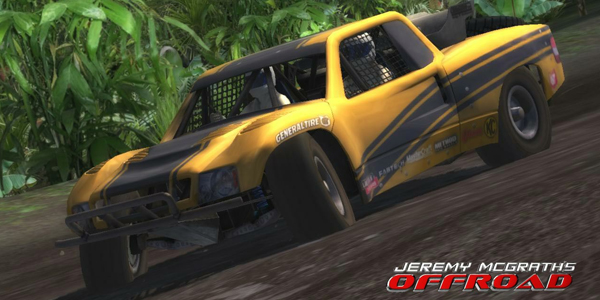 Available June 27th, Reverb Publishing is bringing Jeremy McGrath’s Offroad to XBLA and PSN for the reasonable cost of only $9.99 (or 800 Microsoft points).  Running at 60 frames-per-second, supporting 1080p displays, and offering both full career and multiplayer modes with upgradeable vehicles, this is one arcade title that promises both slick visuals and plenty of content to back it up.

Similar to titles like DiRT, you’ll find yourself drifting around corners on offroad tracks, kicking up clouds of dust and sand while trying to maintain control through treacherous terrain.  To be honest, the offroad portions are always my favorite parts of racing titles — there’s something incredibly fun about trying to maintain speed around a dirt-covered hairpin turn that always kept me coming back to those areas.  Really, it’s the realistic physics that makes it and, hopefully, Jeremy McGrath’s Offroad will nail it.  Reverb’s press release has me most excited for the 8-player multiplayer, which looks to support a number of vehicle classes and loadout options.  If your a racing fan or looking for a fast-paced arcade title, keep your eye out for this one at the end of June.  Check out the official press release below and visit the official website here for more details including gameplay footage.