Here’s a Look at Jesse Eisenberg as Lex Luthor 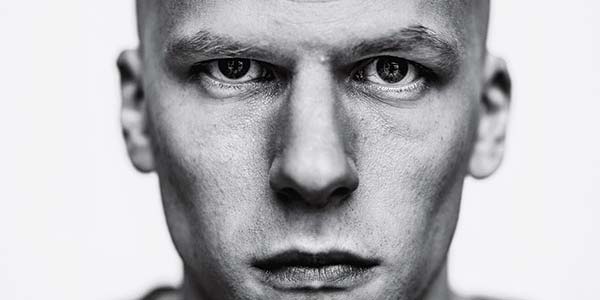 We’ve known forever that Jesse Eisenberg will play Lex Luthor in the upcoming Batman vs Superman: Dawn of Justice.  How he’ll BE in the role is still anybody’s guess. I don’t envision much of a middle ground– it’s either going to be a disaster or a truly inspired casting choice.  But Eisenberg is a solid actor, and an interesting choice, if nothing else… that makes me want to lean in his favor.

Want some clues as to what this version of Lex will be like in the movie?  Let Zack Snyder serenade you with some vague nothings about Superman’s arch nemesis:

“Our Lex is disarming and he’s not fake… He says what he believes and he says what’s on his mind. If you can unravel the string and decipher what he means, it’s all there.”

From a visual standpoint, Lex isn’t the most showy-looking bad guy– he’s just a rich, bald white dude– but Entertainment Weekly has released the first image of Eisenberg in character all the same.  And yes, he’s bald.  And white. And presumably rich.  Totally nailed it, guys!

I like Eisenberg plenty, and he’s played his share of charismatic, morally ambiguous geniuses quite well in the past.  I have confidence that he can bring something to this character, provided he actually gets some substance to work with.

Honestly, my biggest fear is how Lex will be positioned as the villain.  In Man of Steel, Superman was responsible (directly or otherwise) for a staggering amount of collateral damage, by all accounts including thousands of lives lost.  And the movie ends with him mocking the military for attempting to keep tabs on him.  As far as I’m concerned, Man of Steel still reads that the distrust for Superman that drives Lex Luthor is not only warranted… it might be the right response.  It’ll be interesting to see how Snyder and his team will speed-ramp their way around that conundrum.

See the whole picture– including the rest of Jesse Eisenberg’s big, bald melon, over at EW.