JJ Abrams Checks in From Star Wars Set (With a Friend) 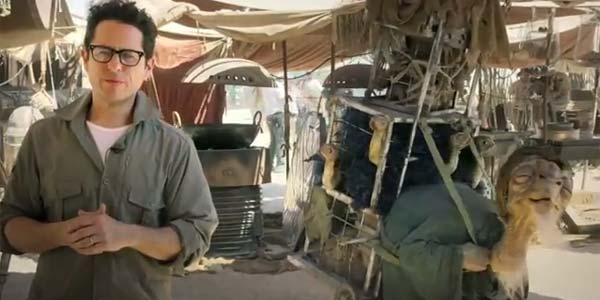 JJ Abrams released a video to promote a cool new charity program called “A Force For Change,” which will allow fans to pledge to help UNICEF Innovation Labs and Programs, and be entered for a chance to appear in the new Star Wars movie.

This is a cool promotion, for sure, and Abram’s video is really neat.  He’s filming his message in front of an apparently live set– Tattooine from the look of it– but the really cool part happens around the halfway point, when an awesome looking (and practical!) alien wanders into the frame.  I have no idea who this little guy is, but he looks totally cool, with his rickety backpack filled with baby versions of himself, and I love the casual look he gives when he turns back at Abrams.

It’s a cute video and it’s promoting a good cause.  And it feels like a much better use of Abrams’ patented viral ploys than we usually see.  Yes, we get no information on who this creature is (or even if he’s IN the movie), but he definitely looks like he belongs in a Star Wars movie.

Abrams has proven that he’s great at capturing a visual style, so I have great confidence his movie will “look” like a real, classic Star Wars movie.  This reveal confirms we will be seeing some practical creatures in the film, which is a huge step up from the CGI dominated prequels, and I sort of loved the way they revealed this.

The question remains, though, if the story and characters will be any good.  That’s ultimately what will define the new Star Wars as a victory or a failure, much more so than making a movie that shares the look of the Original Trilogy.  But if nothing else, capturing that classic aesthetic in the new movie will make this a more watchable entry in the series than the prequels, if only for the nostalgia factor.

Click Here for more info on Star Wars: A Force For Change.