John Dies At The End Is A Head Trip Worth Taking 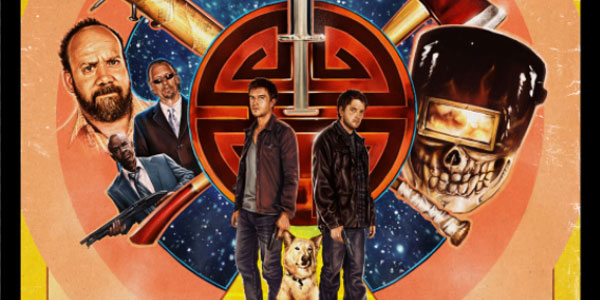 Weird and wild and lots of fun, John Dies at the End is a great adaptation of James Wong’s cult classic novel, and another worthy addition to Don Coscarelli’s legendary filmography.

I’ve been trying to figure out exactly how to review this movie over the past few days.  For those not familiar with the book, John Dies at the End is a surrealist sci-fi that just keeps escalating in its scope and strangeness.  It’s not so much that there are a lot of twists and turns, as the story itself if built out of plot twists, making it difficult to go into the story without spoiling it.  What I will say is, you don’t want to be spoiled.  Not by a review, and not by watching this movie all by yourself On Demand.  John Dies at the End is one of those movies that feels best suited for a group viewing party– it won’t invoke a quiet, pensive audience… it’s a midnight cult movie to its core, one you watch with your friends and laugh and cheer and wince your way through.

Iconic genre director Don Coscarelli does a great job paring down Wong’s fairly large novel without losing much, and the end result feels both faithful to the source material, and the perfect fit for the director of classics like Phantasm, BeastMaster and Bubba Ho-Tep.  The cast is perfect, from Chase Williamson’s tweaky take on Dave, our protagonist and (sometimes) narrator to, Rob Mayes as John, Dave’s dude-bro friend who takes surprisingly well to to interdimensional warfare and time travel.   We also get wonderful smaller roles for Paul Giamatti as Arnie, the reporter trying to chronicle Dave’s crazy story, Doug Jones (with no makeup or prosthetics, for once!) as the mysterious North, and an incredibly funny, scene-chewing turn by Clancy Brown as Marconi, the TV psychic whose powers may not be as phony as his infomercials suggest.

The effects work was a little less consistent than the great cast, but when it worked– mostly for the practical stuff– it was fantastic.  Coscarelli wisely opted for practical effects whenever possible, and there’s some great makeup and puppet work on screen here.  The creepy, interdimensional slugs were wonderfully nasty, and had a real presence as the actors got to interact with physical creatures.  I was intrigued to learn that even the closeups, which featured the critters’ moving mouths filled with teeth, were still practical and not CG.  Likewise, other creatures like the meat monster looked great, thanks to the always stellar makeup and effects work of KNB.  There’s a few moments where CG took over, and while it’s not SyFy Original-level bad, scenes like the assault on Korrok were distracting enough to pull me out of the story, which was a shame.

It’s worth noting that, while Coscarelli doesn’t have the biggest list of films to his name, he’s done an admirable job of remaining a true bastion of cult genre cinema.  While many of his contemporaries seem to have either lost their way over time, or have simply given up entirely trying to make watchable movies, Coscarelli’s recent works like John Dies and Bubba Ho-Tep feel cut from the exact same cloth as the classics that made him a legend.  It’s refreshing and inspiring to see this director stick to his guns, and continue expanding as a creator while staying true to his offbeat, midnight movie aesthetic.

With John Dies At The End, Coscarelli has once again proven himself to be a strong voice, as well as eye, for genre filmmaking. This movie is smart, fast paced, and entertaining as all get-out, and it wears its low budget, B-Movie schlockiness like a badge of honor.  John Dies is a good time, and one that deserves to be experienced the way it should– as late as possible, surrounded by as many fellow movie geeks as you can fit in a room.

John Dies At the End is available now On Demand, and hits select theaters on January 25th.