The Joker Gets Animated Thanks To DC Collectibles 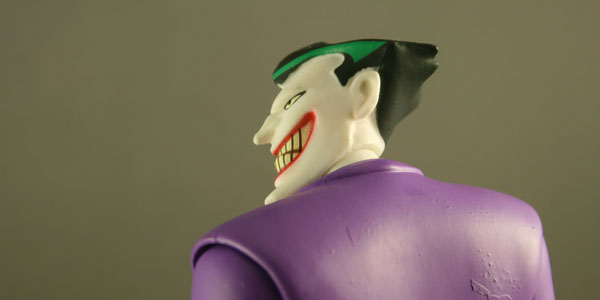 It has been said that a hero is only as good as his villain. DC Collectibles has given us arguably the most popular villain in their stable, and in his most critically-acclaimed style.

There is no mistaking that mischievous grin, the purple suit, and the green streak in his hair. This figure is meaningful to Batman: The Animated Series collectors, not only for his significance as a character, but also as a litmus test to see if DC Collectibles have fixed the breakage issues of wave 1. I can say with confidence that you won’t see the durability issues (or lack thereof) plaguing the first series. While improvements have been made, it does provide us an opportunity to now properly address the lower tier problems that are keeping this impressive collection from being unmatched in execution.

Sculptor Irene Matar really homed in on making the figure slavish to the model sheet. I state that ambiguously. The scale is there. While I wait for Batman in wave 4 for a proper comparison, he is appropriately taller than Robin, but gets dwarfed by Man-Bat. His stand works the same way as previous figures, and there are no design differences to be seen: it’s the standard-issue model sheet of the character at the base, with the grip sliding up and down the pole to clip the figure at the waist. The grip sooner braces the figure in vain than holds it securely, but he stands quite well unassisted.

DC Collectibles really listened to fan feedback. I am overjoyed that the Joker has a white face, versus the shadowy bluish hue (which can be explained away as the character being animated at night) of his figure predecessors. His suit jacket will not hinder articulation at all. It’s made of an extremely soft plastic that doesn’t inhibit hip and shoulder movement in the slightest. He can bend at the hip or put his arms above his head with zero fuss. Also, the visually distracting hip pins are no longer visible. The joints move nicely, and while I still work the wrists cautiously in fear of a break, the worries of the previous assortment are a thing of the past. Lastly, all the heads pop off now, with the barbell connector popping out of the neck, versus remaining in the neck. This is fantastic, should DC Collectible ever need to make alternate heads, or “attitudes” for the characters down the road.

No doubt, Joker looks fantastic standing there in all his chaotic glory. However, the marquis feature of this action figure line is the attention to detail and the copious articulation. While serviceable, improvements are still evident and needed upon closer inspection. First, the paint QC needs finessing. Like the last assortment, finding the figure I wanted meant hitting four stores, with only 1 figure out of 13 worth purchasing. With your eyes being drawn immediately to his smile, it is sad to report that it’s the most difficult part of the Joker for the factory to nail successfully. His teeth aren’t as crooked and uneven as the toy portrays. It seems the mouth is painted in this order: lips, then yellowish smile, and finally brown linework to show the individual teeth. On just about ever figure I have seen, the teeth lines either bleed into the lips or fall short of the gum line. Joker’s lips should have been painted last to avoid this effect. It may be the design of the sculpt, but his top lip line barely registers as well. On many Jokers I have seen, it looks like he has no upper lip at all, but rather a red gum line. The best way I can describe his head is that it looks like the simplistic facial design Joker uses to personalize his explosives throughout the series, if you understand my meaning. In other minor painting issues, the signature black “masking” or eye shadow around his eyes are nowhere in sight. Joker’s shirt collar was also sculpted too low on the neck. Many customers will think his shirt has been sloppily painted past the neckline into his white neck, but it’s actually accurately placed. Like Catwoman’s eyes, the paint is masking the sculpt’s shortcomings, unfortunately.

Speaking of the sculpt, a couple of things caught my (admittedly overly critical) eye. While Joker has a soft coat, the tails are not shaped as depicted on the show. Does the sculptor only rely on screen grabs and model sheets? That’s fine for a maquette, but I want to see a toy that translates how they moved in the series in a thoughtful and meaningful way. His pants are too high up on the body and his hinged t-crotch is, quite honestly, enormous.  If his shirt ended where his t-crotch begin, and the t-crotch was half of this height, it would have worked nicely. His shoes are very plain, with no linework at all, save for the black portions at the foot and heel. There are no raised edges to determine where the shoe ends and the ankle begins. It looks really basic (read: non-descript for later reuse) and that’s unfortunate. Honestly, they closer resemble Joker wearing black low-heeled women’s shoes than his trademark spats. I wonder if it’s for the inevitable TNBA Joker reuse. Perhaps it wouldn’t have been as apparent if his pant leg tapered off lower, covering the ankle. 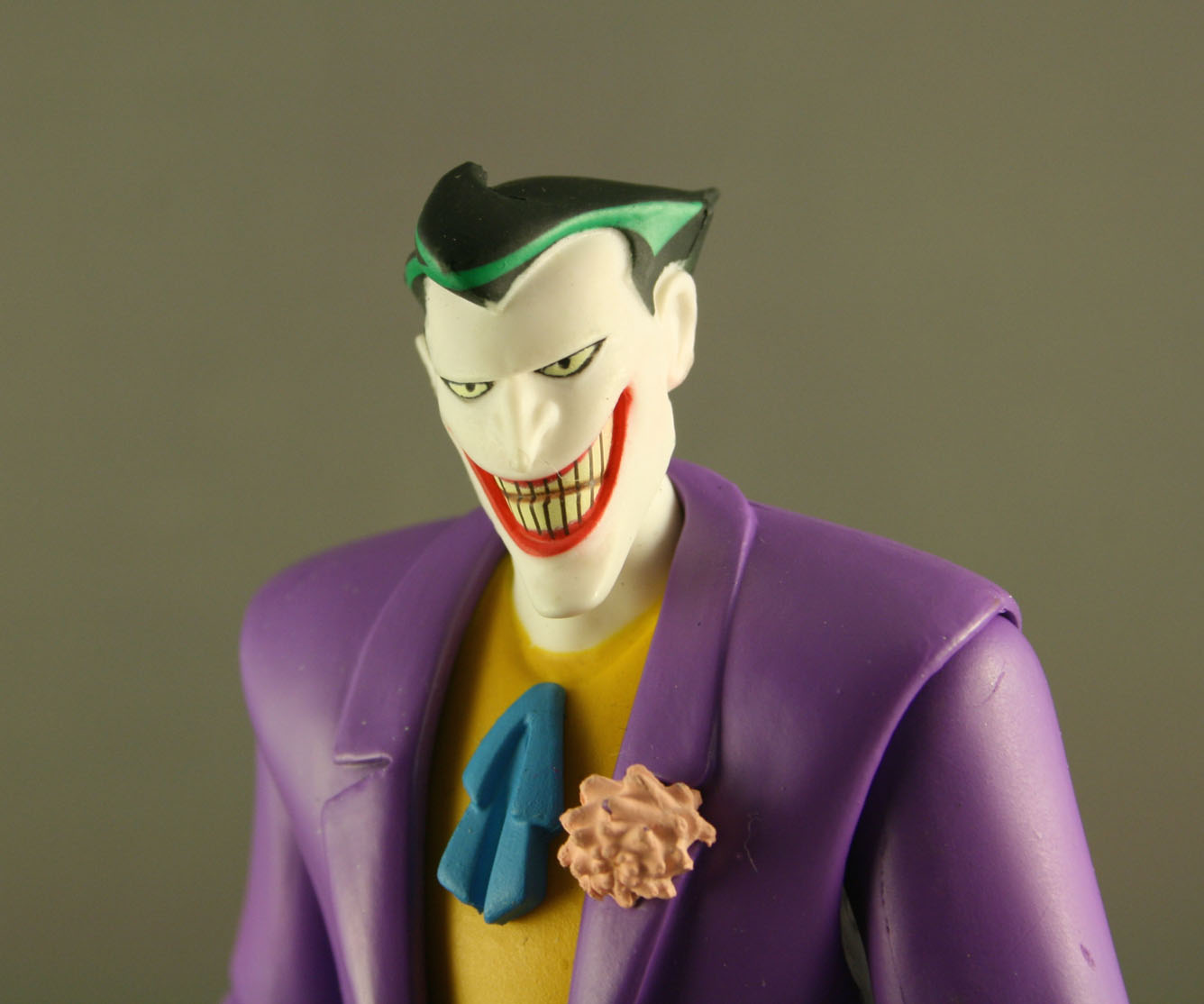 Once again, if articulation is the hallmark of this property, then it needs to be more functional. I can achieve the Joker’s hips doing a full split out past 180º (270º really), but his arms and legs can’t bend 90º at the elbows and knees, respectively.  That is simply not acceptable and actually avoidable. The problem lies in how the joints are cut at the sculpt. Joker’s upper arm has this weird wavy cut around where the elbow moves. So the arm can get near 90º, but only at the outer arm (making the forearm point away from the body). If you have TNBA Mr. Freeze, it’s the identical issue. Tragically, if anything, his arms should go 90º at the inner arm, if you wish to pose his hand near his hip (ironically, like the model sheet) with any ease. Speaking of awkwardly-cut joints, the diagonal cut at the back of the knee is…was it to be artsy? It’s truly the most stupefying cut joint I have seen in over a decade. This isn’t hyperbole: it utterly stymies me. Was it to fit the aesthetic? Now his knee can’t bend as far back as it probably could have, and any effort to do so will scratch the paint where the back of the knee meets the lowest point of the slanted cut. There is literally no practical or aesthetic  reason why it was cut this way. Arbitrary angular cuts at a hinge joint are neither fashionable nor functional, and that needs to go sooner than later. Thankfully for a character like Joker, it’s not a deal-breaker.

His accessories are from the episode The Last Laugh.  Included are his knife, comb, oxygen-filtering helmet, a telescope, a pearl necklace, and alternate sets of hands to hold those items. If you can see the above accoutrement, you’ll see why I take umbrage with episode-specific accessories. I mean, some characters use specific gadgets per episode, and getting all of them would be great! However, if you read the toys’ solicit in Previews, Joker also included a brick (which he uses to break the jewelry store window to swipe the aforementioned pearl necklace), a cologne bottle, a make-up sponge, and his Joker playing card. I should be “glass is half full” here and praise them for eschewing the brick, sponge, and cologne bottle, as he had no articulation or hands capable of holding and using those items as he did in the episode. But to see the only item that would be significantly his (the playing card) being dropped in favor of the comb and telescope? I can only assume that the articulation prevents him from bringing the telescope to his eye (provided I ever have the initiative to put the telescope in his hands). If this is an excuse to add the playing card in a future accessory pack, then what a cruel (though shrewd) game DC Collectibles is playing with us. One last point of contention: the fish bowl-shaped breathing helmet was assembled as 2 symmetrical pieces, fastened down the middle, with two painted yellow circles acting as the grated “air filters”. For whatever reason, the factory made this attachment line front to back, versus side to side, so Joker has a giant distracting line running down the middle of his face when wearing this thing. While the helmet isn’t a highly-lauded accessory, I don’t understand how something this visually glaring was approved with DC Collectibles. At least the Joker has a knife, so he isn’t utterly defenseless against the gadget-heavy Batman.

Joker overall, is a handsome sculpt and will be a great figure to display in your Batman: The Animated Series collection. As with any new line, it takes a couple of assortments before the kinks can get worked out. Joker has shown that DC Collectibles addressed and fixed the immediate problems with the line. They should be commended for the speed that they rectified this issue. They have garnered good will with me, for sure. It’s my hope that they employ a similar commitment to their paint applications, their accessory choices, and articulation that best benefits the use of those accessories. For the figure that we have, he is a very nice toy that moves and displays well. With our collective constructive feedback (at least that is the spirit in which it’s intended), I can’t wait to see how DC takes subsequent assortments to the next level. 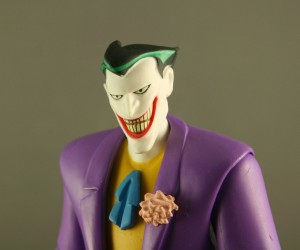 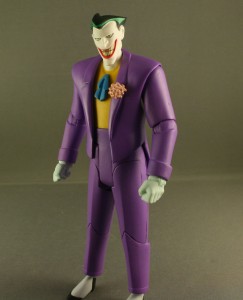 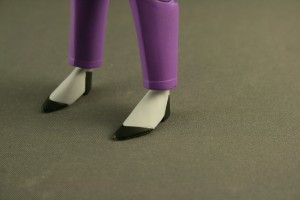 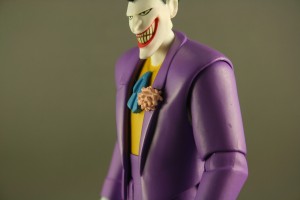 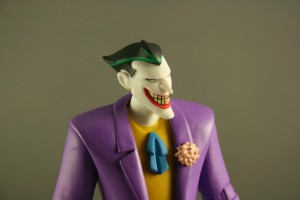 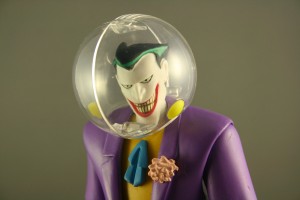 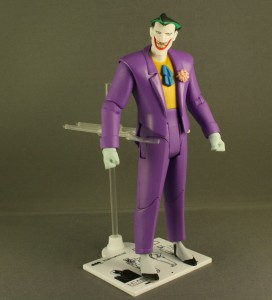 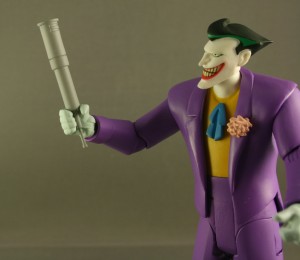 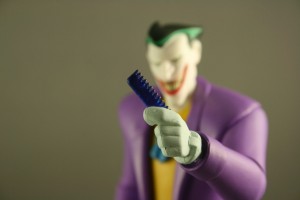 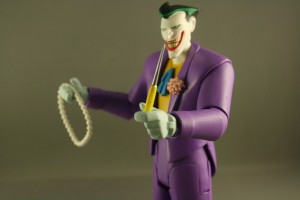 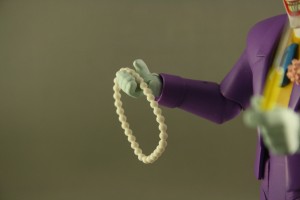 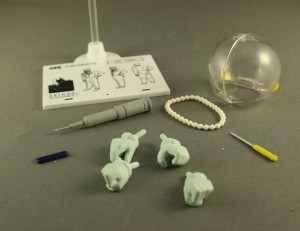 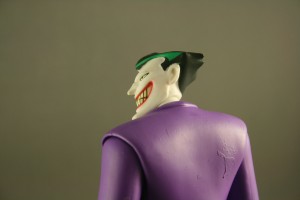