The Joker and ‘Panda Man’ Set Their Sights On Comic Con 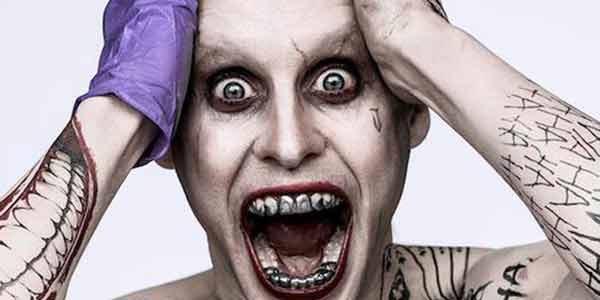 The Furries are gonna be all over this one.

I’ve given it over a year.  I’ve mulled it over, let it truly sink in, analyzed and scrutinized, and here’s something I’ve come away with– Jared Leto’s Joker (making his debut in Suicide Squad) looks awful.  This is not to say he will be a bad character in the film– I’m honestly hoping for the best!– but the heavily tattooed Hot Topic aesthetic? Not for me.

But if you’re NOT like me, you’re in luck, because Mattel will be offering up an exclusive 6″ DC Multiverse Jared Leto Joker at Comic Con, along with one of his henchmen seen in the latest trailer for Suicide Squad.  Yup, the Panda Man action figure is gonna be a thing, as revealed last night by USA Today.

I have to admit, there’s something about gun-toting mascot henchmen that look like background dancers from a Miley Cyrus concert that… well, I don’t exactly like it, and it certainly isn’t cool, but… it definitely feels like a good fit for Leto’s particular brand of condom-mailing ‘comedy.’

All Jokering aside, this is a fun concept for a Con exclusive, and Panda Man appears to be felted, which I think will make him a neat addition to the Suicide Squad toy line.  The two-pack will feature some snazzy box art that looks like the world’s most un-appetizing cereal box, and will retail for $40 at SDCC this July.

USA Today has the exclusive first look at the Panda Man/ Joker two pack, because nothing says ‘Comic Con’ or ‘pop culture blog’ or ‘toy collectors’ like USA Today. Check them out by clicking here.