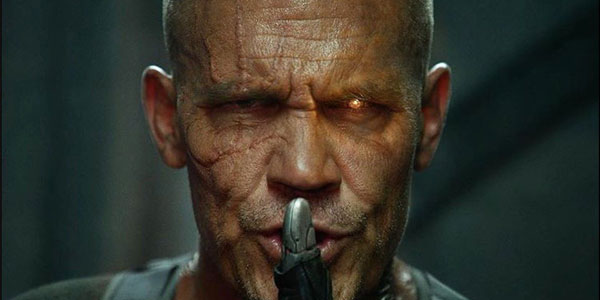 Ryan Reynolds and Rob Liefeld give us our first look at Cable from the upcoming Deadpool sequel.

18 months ago, if you told me I would be even the least bit excited about Deadpool 2, I’d say you’re crazy. Yes, i appreciate the character’s long and bizarre, fourth wall breaking history… but Wade Wilson just wasn’t my jam.  But Ryan Reynolds’ portrayal finally sold me on the Merc with the Mouth, and his first solo movie was one of my favorites last year.

So now, here we are– I’ve been not only the least bit excited, but a LOT bit excited about 2018’s Deadpool sequel.  And one of the big new things in that movie will be Josh Brolin’s Cable, whose big screen look has finally been revealed thanks to Reynolds himself and Deadpool creator Rob Liefeld:

We all have that one, grumpy, heavily armed Uncle from the future. #PremiumCABLE #JoshBrolin pic.twitter.com/JV3yBIIPQH

I really like it! Cable looks grizzled AF, his cybernetics look rad (I especially like how the flesh of his neck merges with the metal… it’s so creepy/ cool), and he’s adorned with enough pouches to make Liefeld proud.  On his own, Cable would look pretty damn perfect, but I also like that he promises to fit in well with Deadpool’s cinematic universe (as does Zazie Beetz’s Domino).

Man oh man, I cannot wait to see how little of Deadpool’s shit Brolin wants to put up with.  It might be something magical.