The Joy of Painting the second Deadpool 2 Teaser 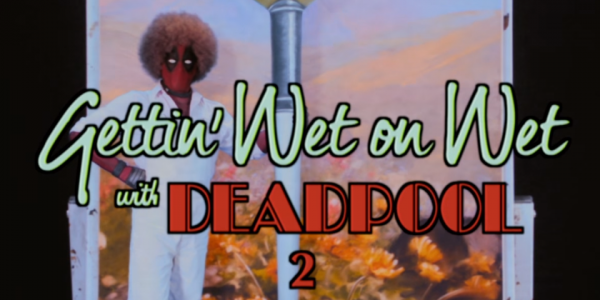 20th Century Fox just dropped the second Deadpool 2 teaser trailer, topping the weirdness of the last one with a Bob Ross inspired cable access show starring the Merc with the Mouth sporting a magnificent white-boy fro.

Deadpool 2’s last teaser involved Wade Wilson taking a hilariously long time to put on his very complex superhero costume alone in a phone-booth, after witnessing a mugging, and effectively shushing comics legends and cameo-master Stan Lee.  After that, we’re oddly enough, treated to a Deadpool voice-over and a Deadpool written book report for the Ernest Hemingway classic, The Old Man and the Sea.  This one, impressively, trumps the irreverence of the superhero genre that was the first teaser with “Wet on Wet” Deadpool’s low-budget instructional painting show with impressive editing to show his finished products and all the filthy and punny painting terms and color names you could hope for.  But if you were seriously hoping for a little bit of footage from the highly-anticipated movie, you’ll be happy to see a few blink and you’ll miss it moments from Deadpool’s second (third if I’m being mean) cinematic outing.  Yes, it’s funny and like Deadpool himself, not suitable for children.  Check it out here.  Make sure you read the official synopsis as well, you’ll be glad you did.

Deadpool 2 is releasing in theaters on June 1, 2018, once again starring Ryan Reynolds as the titular (hero?) and introducing Josh Brolin as time traveling, fellow product of 90’s Marvel Comics, and arch-frenemy to Deadpool, Cable, making his long-awaited live-action debut.  Get excited, but be sure to clean up afterward.