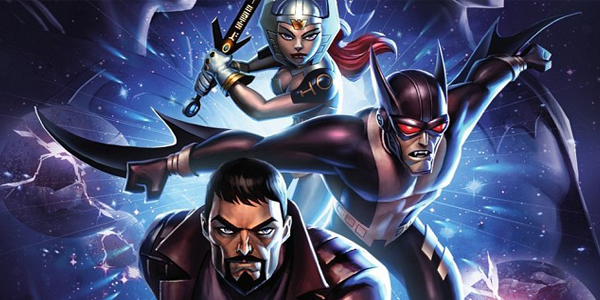 When I first saw the previews for Justice League: Gods and Monsters I was not that interested, but after watching the film it really changed my mind.

Bruce Timm once again proves why he is the master of the DC animated universe. I literally went in with the lowest of expectations here and sure enough Bruce came into my living room via my TV and kicked my face in with awesomeness. I was just a bitter fanboy thinking how can this be pulled off? I still don’t know how but he did!

Each of the characters Superman, Batman, and Wonder Woman get an origin face lift. There are some ties that bind but for the most part its totally original all while staying in the parameters of the characters. At times it felt like Flashpoint meets Tower of Babel, giving just enough of the real DC world to make this one work. There are many cameos in the movie of various DCU personalities, but none will surprise you more than the villain reveal.

The voice talent was on point as always. Michael C. Hall as Batman was a nice touch, and Jason Issac’s as Lex also was surprisingly good. There was nothing wrong at all with this feature. It has no cross over, no tie in, and no need to read into it; just an old fashioned Elseworlds tale that was done very well from beginning to ending.

The special features on the Blu-ray had some cool trailers one in particular was the newest Batman Unlimited Movie that has Troy Baker reprise his role as the Joker (he also voiced him in Arkham Origins). There was also a feature sneak peak for Batman: Bad Blood, which looks like an adaptation of Battle for the Cowl. This excited me because we will see a movie with Dick Grayson as Batman!

All in all you must ask yourself if you like alternate universes. No? Then don’t watch this. You won’t like it. If you say yes however, this is one of the best DC movies that Warner Bros animation has put out in a while.

JQ gives this movie a 8.9/10 which is awesome since going into it I thought it was going to be at least a 5.