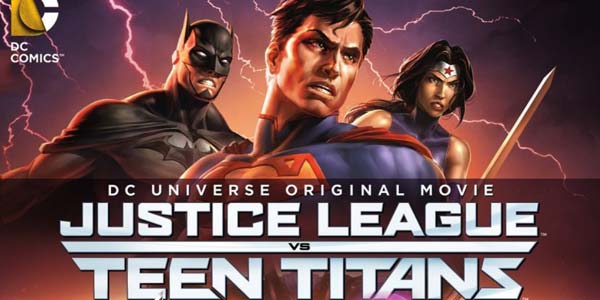 The DC Animated Universe always seems to find ways to raise the bar with each and every feature length movie. Justice League vs Teen Titans keeps that streak going, to an extent.

Justice League vs Teen Titans has nice character designs, good animation, and even a good plot… but it really suffers from poor direction. I’ll be honest, the movie had some boring moments and I couldn’t help but feel that this was two separate movies jumbled together. DC’s animated movies seem to be skewed toward an older audience so they’re not as kid friendly as they once were. I don’t want to sound to harsh about this film because visually it’s amazing (Starfire’s Sailor Moon type transformation scene was flawless) and the adult humor from Beast Boy and Flash was on point.  But I feel the disconnect is that the avid comic reader sees where Damian Wayne is now, and the DC Animated Universe is still years behind. Let us touch on that for a moment. 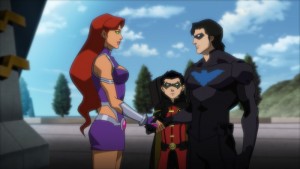 Damian is thrust into the spotlight and once again he has to learn the exact same lesson for the third time after defying Batman’s orders. Nightwing is tasked with shipping Damian to superhero boarding school (aka Titans Tower) and when he arrives we see the roster of Titans. Starfire is the leader, and with her are Beast Boy, Blue Beetle, and Raven. We still see the wise cracking banter that we have come to love with Beast Boy but his jokes tend to be a tad more grown up. Raven, as wonderful as she was, felt misused considering the main antagonist is Trigon.

One thing that could have made this movie a lot better was if Raven and Damian’s positions were reversed, with Raven as the focus and the events from her point of view, with Damian taking a backseat and being the mysterious and mostly silent character. Sure, Damian still could have had the same character arc, it just should have been more subtle and not at the forefront of the story. The movie also should have given some of his screen time to the other three characters, to develop them better. Why not try to give everyone some type of problem or hang up that they have to either work through or acknowledge in order to function as a team? At the end we see the Titans add a familiar face to their roster that pleased me… and be sure to let the DVD play in the credits to see a mid-credit scene that should whet the appetites of hard core Teen Titans fans. 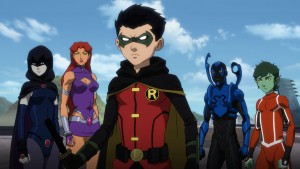 The fight with the Justice League is pretty short given the title of the movie, but it makes sense why they are fighting for only a brief time. During the battle one of the best scenes saw Superman trying to remove a demon inside the Flash. The other surprise fight pitted Damian against his grandfather, Ra’s al Ghul. I don’t want to spoil these fight scenes, as they really did make the movie good.

The voice acting was good, too. I have always liked Jason O’Mara as Batman but his performance in this film felt flat. Rosario Dawson was a nice choice for Wonder Woman and her line reading was very well done. Christopher Gorham had one line that was delivered with PERFECTION, though I think the most surprising voice credit goes to Jon Bernthal, who really brought Trigon to life.

JQ gives Justice League vs Teen Titans a 7/10. It was not far away from a higher score but there was something to the flow of the film that left me with a small disconnect.