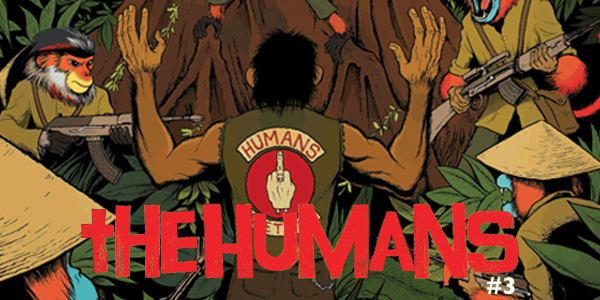 Johnny tries to shake the memories of war, but the only thing that helps is a ride on Moonbeam.

The Humans #3 was released in early January by Image Comics. The series creators are writer Keenan Marshall Keller and artist Tom Neely, with assistance from Kristina Collantes on colors. In the last issue, we met Johnny, who is fresh back from ape Vietnam. Reacclimating himself to normal life is proving harder than he first thought, but luckily he doesn’t have to do it alone.

The Skinny
Johnny is having a really tough time transitioning from the war in the jungle to the life of a civilian. We get a look at what the war really looked like, and how it compares to our history. Oh, and we see evidence of actual human beings existing in this backwards world.

The Good
The Humans concept continues to delight. I liked seeing how the alternative world’s version of the Vietnam war is very similar to the one in our history books, except the Viet-Cong forces are howler monkeys. The art is rugged and gruesome at times, but it matches the tone of the story very well. Again, the creative team makes use of the printed form and illustrates a couple nice looking full spreads that make for great visual variety. The scene where Johnny was walking across the room and slowly slipping into a flashback was particularly good. Lastly, I was intrigued by the skins, better known as homosapiens. By the looks of it, we’ve devolved to the role of test subjects and laborers all while in our birthday suits.

The Not-So Good
I never like these slower, character building issues, regardless of how they can impact the story later down the line. We’re only three issues in, and there’s a much new world to explore, but I picked up this book to see bad ass biker monkeys, and I’m getting slightly impatient. It appears Johnny is going to be our point of view character for the time being. That being said, the rest of the guys in the gang seem quirky and amusing, and I hope to spend more time with them.  By the looks of the teaser for next issue, it appears the story will be moving more towards organized crime, which has me very interested.

The Decision
Another slower moving issue filled with great art and simian violence. I still really like the premise but the plot feels slightly stagnant. Next issue teases skin fights, and shows two burly ass dudes swinging on each other. We’ll see how it goes when The Humans #4 is out February 4th.