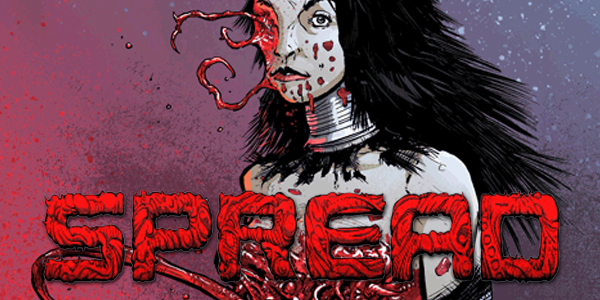 Ravello and No go toe to toe as Molly lets Hope’s secret out.

Image Comics released Spread #5 a couple weeks ago. The series is co-created by writer Justin Jordan and artist Kyle Strahm, with coloring by Felipe Sobreiro. At the end of the last issue, all sides were poised for war, as the Spread army began its assault on Jack’s hometown. No isn’t phased by this, and goes toe to toe with the feared Ravello.

The Skinny
All hell has broken loose on the tundra of Jack’s camp as the Preacher and the Spread attack. In the commotion, and in an effort to save them, Molly shares Hope’s ability and subsequently her secret. This only fuels the fire as Ravello and No square off.

The Good
Starting where everyone starts, the cover art for this issue was especially eye catching. The woman with tentacle guts jumps off the rack in a wonderfully gory fashion. Once past the cover, the art inside is equally atrociously excellent. I imagine Sobreiro put a good dent in his red markers to create all the blood and tentacle juice that’s seen in this issue. In terms of the story, I think Hope’s secret being out brings clarity. They all wanted the baby, but it didn’t feel like they knew why at first. As Jordan points out in the liner notes, Hope’s narration is key to the story to balance out No’s silence. I think he did a good job of offering enough information without feeling overpowered or too omniscient.

The Not-So Good
Despite the battle scenes being large and raucous, some of the characters came off looking a little stiff. More so in the beginning as opposed to Ravello and No’s fight. This could easily be attributed to the sheer number of people in the scene. The other thing I noticed was that Ravello takes a shot to the nose, causing it to bleed right before he got bit. However a couple scenes later has him clean faced per usual. The creative team did a better job keeping Molly’s spatter consistent, but even that changes shape. Some parts of the story were a little confusing for me, or at least too convenient. Like the three giant worms at the end of the story. You can’t tell me a guy as skilled as Ravello wouldn’t feel the earth shake with three behemoths behind him.

The Decision
Despite my nitpicking, I’m infatuated with this story. It’s due to my repeated read troughs that I’m able to pick up on the nitty gritty, but the fact that I’m willing to reread this series should be the biggest indicator of how I feel about this book. The next issue marks the end of the first arc, and will probably merit another read through when the whole story has been released. Spread #6 is due out February 11, with the first trade paperback due out the 18th.