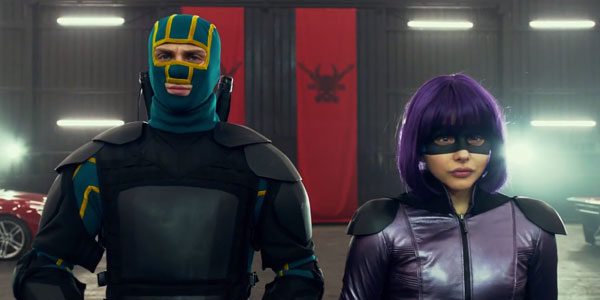 Today was the day for Kick-Ass 2 at Comic Con, as the denizens of Hall H were witness to a brand new extended trailer, which has now hit the web in a slightly different form for everyone’s viewing pleasure.  I really love it, and I;m surprised by how much of the extremely dark Kick-Ass: Balls to the Wall comic seems to be adapted fairly straight for the new film.

One departure, though, is Chloe Moretz, whose Hit Girl is clearly a teenager in the new film, instead of the homicidal preteen of the subsequent comics series.  I’m intrigued to see how her age disparity will play out in the film, although this trailer and it’s “sexy” scenes suggest it clearly won’t be ignored.

That’s more than Universal can say about this film’s much-discussed violence.  Jim Carrey jumped off the promo wagon for the film, citing its violent content in a post-Newtown world, and true to his word he was nowhere to be seen at Comic Con.  But neither was a fan Q&A after the Kick-Ass presentation ended… it seems like Universal is opting for the silent approach to the film’s controversy.

We’ll see in a few weeks if the silent treatment pays off and puts asses in seats, ready to be kicked.  I know they sold me at this point.

Check out the new trailer below: