Kick-Ass 2 Holds Too Many Punches 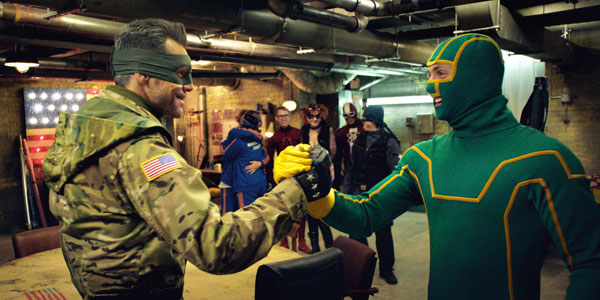 This Kick-Ass sequel does anything but.

I’m not saying it would be easy to follow up on Matthew Vaughn’s Kick-Ass.  That sleeper hit was so well-made, so effortless in its irreverence and so jam packed with energy, I can’t help but feel I should have gone into Kick-Ass 2 with lowered expectations.  But the promising trailers, Vaughn’s producing credit (he handed off directing reigns to Jeff Wadlow), and some solid source material in Mark Millar’s comic book sequel had me hoping lightning would strike twice.  I left the theater disappointed.

Kick-Ass 2 is a frustrating mess of a movie, one that has a lot to like– even a few things to love– that consistently makes impossibly bad choices that see-saw you out of the story as quickly as it pulls you back in.  Based on both the Kick-Ass 2 and Hit Girl comic books, all mashed together, the movie sequel picks up about three years after Kick-Ass and Hit Girl teamed up to take down mobster Frank D’Amico.  Since then, they’ve both retired from super hero-ing, although their actions have inspired a whole new generation of costumed vigilantes who now patrol the streets fighting crime (or at least doing community service).  Dave Lizewski is itching to once again don the Kick-Ass suit and join the new cause he started, and he wants Mindy Macready to join him once again as Hit Girl.  But Mindy is frustratingly grounded thanks to a promise she made ot her deceased father, Big Daddy and her new guardian, his former police partner Marcus.

While Mindy is strong armed into surrendering her costume for good, in an attempt to live a “normal” 15 year old girl life in high school, Dave joins up with a team of civic minded do-gooders called Justice Forever, lead by a surprisingly great Jim Carrey as Colonel Stars and Stripes, an ex mob enforcer who becomes a paramilitary hero, complete with a star spangled bludgeon and an attack dog named Eisenhower.  As Kick-Ass enjoys his new teammates and Hit Girl attempts to socialize, Chris D’Amico, the Red Mist, plots his vengeance on the two heroes by becoming the world’s first real-life super villain.  He assembles a team of his own after realizing he can’t cut it as a solo bad guy, and they begin to cause carnage as he closes in on the two heroes he blames for his father’s death in the first film.

That’s the general premise of the movie– it obviously has a lot to accomplish in its just-over 90 minute run time, and pacing becomes one of the movie’s first major issues.  Things clip along at too fast a pace, a result of the two stories being merged into one movie, so nothing feels as fleshed out as it should.  On the page, Mindy’s struggles to acclimate to the life of a precocious teenager, and her encounters with the bullying popular girls played out incredibly well, leading to an outstanding payoff.  In the movie, the whole plotline runs through its motions way too quickly.  At no point did Mindy’s plight– the frustration that she had to keep taking everything the awful girls at school could dish out instead of giving them the brutal whupping she’s so deadly capable of– feel organic.  Robbing her of the slow burn of her torture at the hands of her classmates made her revenge feel less impactful, more like a cheap reference to the comic book than a satisfying close to her arc.  It’s made worse because the great revenge scene from the comic is totally abandoned in favor of a lame scatalogical gag.

There are a number of strange choices like this throughout.  The comic book delves into some incredibly dark places, and I understand why some of the most extreme moments were white washed for the movie version, but the whole affair feels compromised as a result.  Chris D’Amico’s villain, renamed The Motherfucker, stays firmly in a nebulous zone in which you’re not sure if he’s supposed to be funny and pathetic or dangerous and pathetic.  He never really feels like a threat, which is what was needed to bring the whole structure of the story together in Millar’s comic.  Christopher Mintz Plasse and Chloe Grace Moretz both do what they can with their muddled, poorly written roles, and it was great to see them once again perfectly realizing these characters, even when they were given so little to work from.

Aaron Taylor-Johnson is also fine as Dave, but because he’s a less dynamic character, he seems to get the back seat for much of the journey.  It’s essentially his role in the comics, too, but the first movie found some clever ways to keep him interesting.  This time he’s overshadowed by the arcs of both Hit Girl and D’Amico, as well as Col Stars and Stripes, whose all-too-brief scenes are the movie’s best.  It’s unfortunate that Jim Carrey divorced himself from Kick-Ass 2 over its violence, because he’s the movie’s secret weapon, bringing the same manic energy and slightly demented human charm that made the first film such a gem.  It’s also a shame the rest of Justice Forever isn’t given more characterization, even with more screen time– Donald Faizon’s Dr. Gravity, for example, is given no meat to his broad strokes character (a fact that’s even more frustrating given the same lack of characterization is the topic of a meta joke in the movie).

More than anything, though, Kick-Ass 2 fails to capture the same feel as its far superior predecessor.  While the first movie made excellent use of its DIY shoestrong budget, the sequel feels cheap, with a drastically reduced sense of production value.  The lighting, the cinematography and the low end CGI work all combine to an aesthetic that inches JUST above direct to video caliber, an irony considering the vastly bigger budget they had to work with. The final battle’s migration, from the streets of Manhattan to a less ambitious warehouse hideout, feels more like an obvious budget decision than a stylistic choice.

But the different feel goes beyond the look… Jeff Wadlow’s script and direction just don’t compare to the original by Vaughn and partner Jane Goldman.  That dynamic duo was able to infuse a fun Looney Tunes quality– and a genuinely charming humanity– to Millar’s typically cynical and black hearted story.  Not only did they GET Kick-Ass… they improved on it.  Kick-Ass 2 never gets near that point, barely understanding its material on any deeper levels and certainly not adding to the experience, processing the two books on which it was based in a much more literal and less creative manner.  If it hadn’t followed up such a great movie, maybe the obvious seams showing all over Kick-Ass 2 wouldn’t look so bad.  But even under the best of circumstances, nothing on screen here (with the exception of Jim Carrey) would really shake things up the way the first film did.