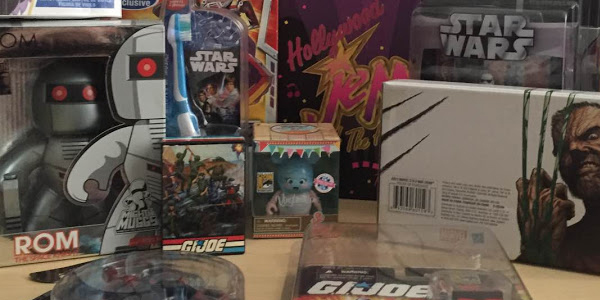 We all love our collections but from time to time they become more than something to look at and show off. Our friend Joe Moscone is using parts of his collection to help fight Cancer!

One of the first people to treat this site as one of the big guys was Joe Moscone, who at the time was in charge of PR for Hasbro. Over the years he has been a friend of the site and although he has moved on from Hasbro, he is still active in the toy community. Using his extensive collection he has helped raise money for the Receptions For Research: The Greg Olsen Foundation. We just the word that this year’s auctions are live and we have an update from Joe.

Since 2010, I have led a small group of friends—we call ourselves the New Jersey Grabowskis—in fundraising for the foundation through a variety of local community and social media tactics. Last year, my girlfriend Caitlin and I introduced the charity toy auction into the fray in an attempt to take our fundraising efforts to the next level—and boy did it ever!

My team has now raised more than $90,000 since we began seven years ago, and as we enter the homestretch of this year’s fundraising campaign, we’re hoping that you can help us elevate our fundraising once again by helping us drive more traffic and potential buyers to our eBay auctions.

Unlike last year, when we posted a dozen or so items a week across a month or so, this year we’ve posted everything (30+ items) all at once. IT’S LIVE NOW! And the auctions end this Monday, June 13th!

100% of the money raised from these auctions is donated to Receptions For Research: The Greg Olsen Foundation, an incredible organization devoted to providing hospitals, doctors and scholars across the nation the resources necessary to treat and enrich the lives of those affected by various forms of cancer and cardiovascular diseases.

Here’s a link to our eBay auction

Here is the list of everything offered this year, and there are some gems in the bunch for those who missed out on some of these great figures over the years.

Head over to Ebay and donate to this great cause. And if you just want to give and not get a toy you can head over to the donation pages for Joe and Caitlin