Kill Bill: The Whole Bloody Affair Coming (For Real) In 2015 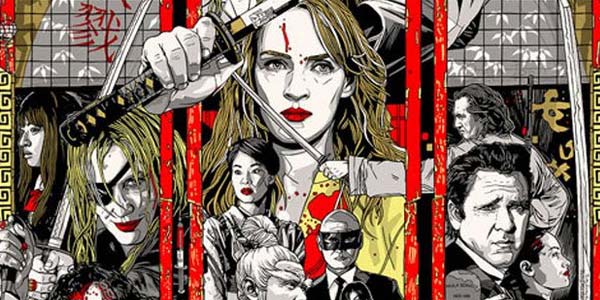 When Quentin Tarantino first developed Kill Bill, his intention was to release one epic four-hour movie.  The studio balked at the idea, hence the film was eventually released in two parts.  But Tarantino re-assembled both halves into the original format for Kill Bill: The Whole Bloody Affair, a director’s cut of sorts, which has had a few sporadic screenings but remained in limbo otherwise.

That is, until last week at Comic Con, when Tarantino confirmed that this ultimate edition of his kung-fu western classic would finally be available in 2015… on both Blu Ray/ DVD, and a limited theatrical run!

The other cool thing about this is, much like the recently released Twin Peaks box set, The Whole Bloody Affair will feature some never before seen features in the film, including an all-new extended animated sequence offering more details on the tragic origin of O-Ren Ishii… from the very same studio that did the animated sequence in the original film!

Here’s what QT had to say about it at Comic Con:

What’s going on with that is originally back when KILL BILL was going to be one movie, I wrote an even longer anime sequence. So you see in the movie [O-Ren] kill her boss but then there was that long hair guy… The big sequence was her fighting that guy. I.G. [The Japanese Anime Studio] who did GHOST IN THE SHELL said we can’t do that and finish it in time for your thing. And [plus] you can’t have a thirty-minute piece in your movie. I said okay. It was my favorite part but it was the part you could drop. So we dropped it and then later when I.G. heard we were talking about doing KILL BILL: THE WHOLE BLOODY AFFIAR — they still had the script so without even being commissioned, they just did it and paid for it themselves. It’s really terrific. Anyway, The Weinstein Company and myself were talking about actually coming out with it sometime, not before the year is out, but within the next year with limited theatrical engagement as well.

This will be one of those movie events that demands to be seen in theaters… Fingers crossed the Alamo Drafthouse picks this up next year, because if they do it’s time for a road trip to Yonkers!