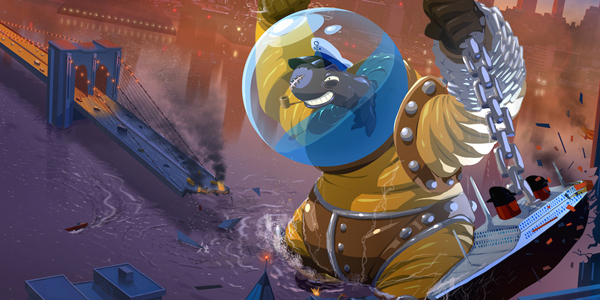 At GenCon 2014, IELLO brought a very limited supply of their much-anticipated follow-up to King of Tokyo, sending gamers scrambling to get their hands on a pre-release copy.  While it certainly doesn’t reinvent the wheel, it maintains everything that made the original so wildly successful while improving upon the formula in every way. 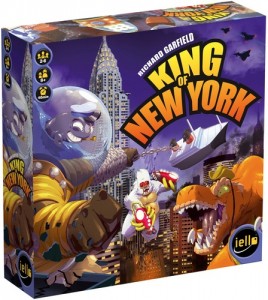 Upon opening up the box, fans of King of Tokyo will be greeted with a familiar set of components.  Monsters are expectedly silly and over-the-top and represented by thick cardboard standees with black IELLO-branded bases.  The individual player tablets with dual dials showing the current health and score of the player haven’t changed either – in fact, these pieces are completely interchangeable between games, as are the translucent green energy cubes.  The dice, however, are completely different as many of the core actions have been expanded.  There are a few dozen cardboard token that are used with specific powers that may be earned in the game and, the most important addition, forty-five building/unit tiles.  Eight custom dice are also included, two of them being bright green and only used in certain instances.  All dice have six different designs on their faces which correspond to different actions the player is able to perform.

Initial setup is simple enough.  The game board, which features New York City’s five boroughs, color-coded and distinctly marked, is laid out and three stacks of three building tiles are placed in each one.  Cards featuring extraordinary powers that can be purchased using energy cubes are placed next to the board, as are the two Special cards that we’ll touch on in a bit.  Players take their monster avatar and place it into any borough, other than Manhattan, that does not already have two monsters occupying it.  The first player rolls the six black dice and is able to take up to two re-rolls with any or all of them.  Once the player is finished rolling, 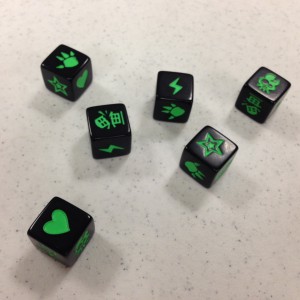 they must resolve all the die faces in the order they choose.  For every lightning bolt that is rolled, the player gains one energy cube and for every heart symbol rolled, the active player may heal one health unit (provided they are not in Manhattan).  Star symbols are tied to a special card that we’ll get to in a little bit and building icons allow a monster to destroy buildings with a numerical rating that is less than or equal to the number of icons rolled.  Therefore, if you are in a borough with “2” and “1” buildings showing and roll three building symbols, both of those building would be destroyed.  Crushed buildings grant players with victory points, health, and energy according to the symbols featured on the tile.  Once a building is levelled, it is flipped over to its “military unit” side and placed in the same borough.  If any skull icons are rolled, these military units attack, causing one unit of damage each.  Rolling one will trigger all units in an area to attack the player that rolled it.  Two icons will cause those units to attack each player in that borough and three icons will result in every monster in play being attacked by every unit in the borough they are currently standing in.  Lastly, the claw icon will damage other monsters (one damage for each claw rolled).  If you are in Manhattan when these are rolled, you damage all Monsters outside of Manhattan and if you are in any other borough, you damage all monsters in Manhattan.  In a 2-4 player game, there may only be one monster in Manhattan but, with 5-6 players, there must be two. 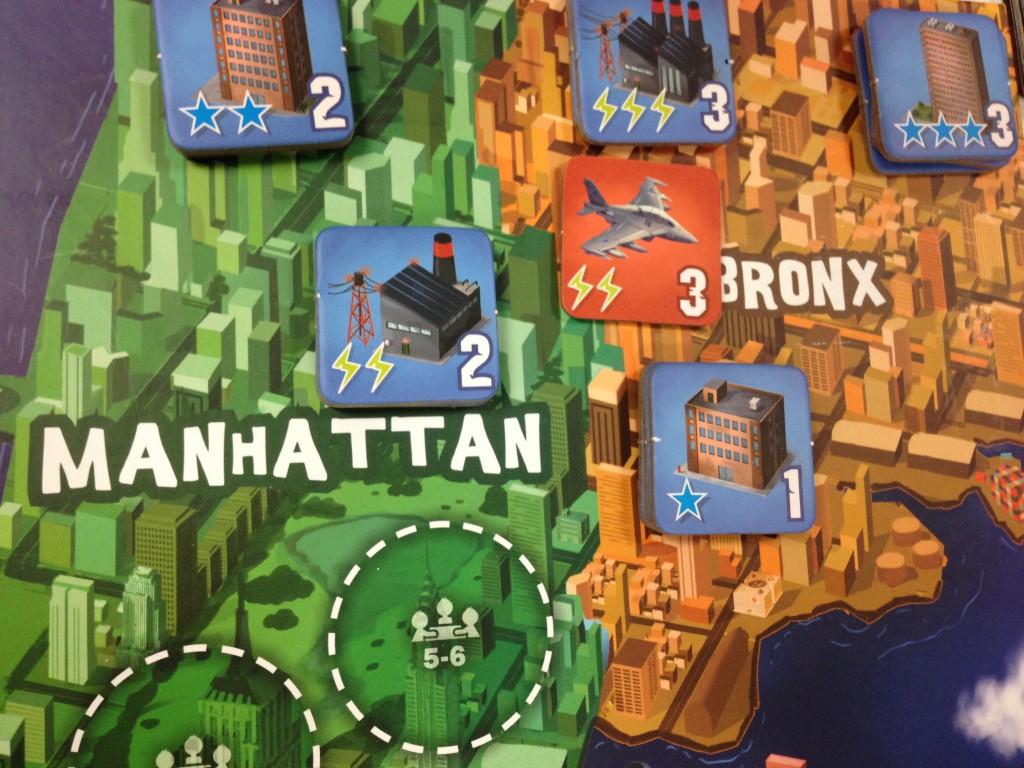 So how do you move in and out of Manhattan?  After the dice are resolved, players may move to other boroughs.  If Manhattan is vacant, the player must go there.  The only way to leave Manhattan is when you are attacked and may flee to another area as a response after taking the damage.  This leaves the area open causing your attacker to be forced in.  As fewer players are allowed into the area, it potentially makes the player occupying Manhattan the target of many attacks, which is why there are great rewards for being there.  Upon entering Manhattan and at the beginning of every turn that you continue to occupy the borough, that player gains an increasing number of victory points and energy.  Keep in mind, though, that there is no healing allowed there and entering the area can be quite deadly – once any monster’s health reaches zero, they are eliminated. 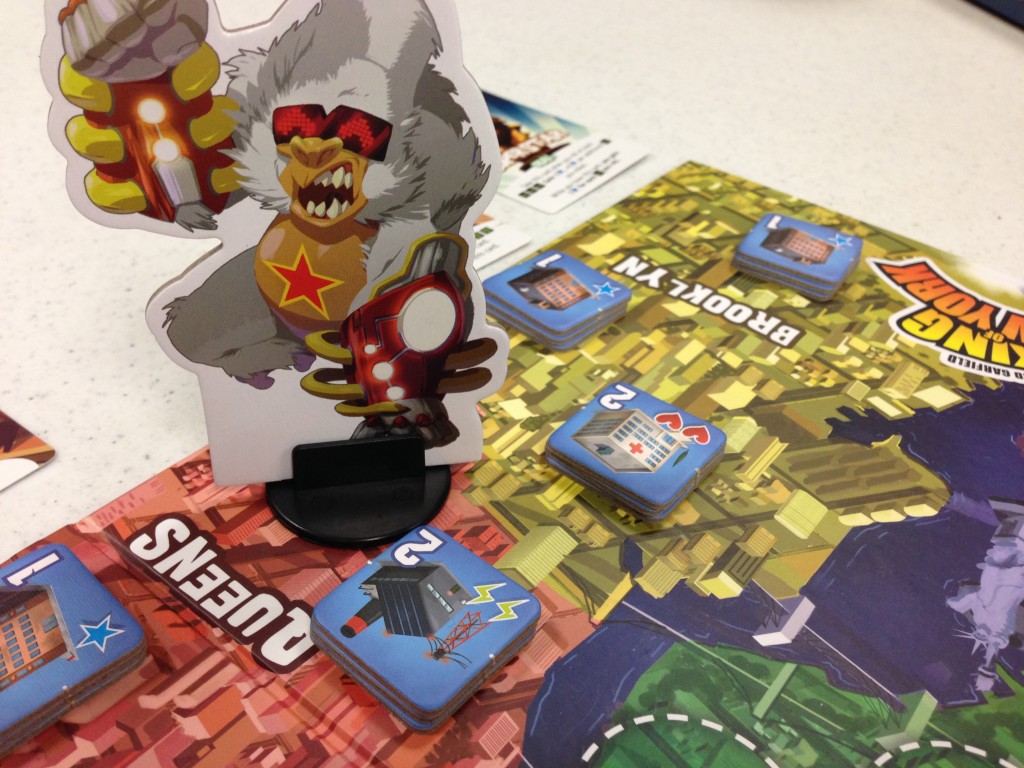 Ultimately, the goal is to be the first to reach twenty victory points or simply be the last monster left standing.  Much like in King of Tokyo, King of New York plays quickly and chaotically.  With the inclusion of attacking military, building bonuses, and special “achievement” based cards, I find that things escalate much more quickly here though, making it much easier to amass points or get annihilated in the process.  One of these achievement cards makes use of the star faces on the dice I mentioned earlier.  While rolling fewer than three stars does nothing, rolling three or more lets you take the “Superstar” card and put it in front of you.  This card grants an immediate victory point and an additional one for every star you rolled over three.  As long as the player has this card on future turns, meaning it’s not stolen by another player who rolled three star results, every star rolled is a victory point.  Similarly, there is a “Statue of Liberty” card that is assigned to any player who rolled three skull icons.  This grants them three victory points as long as the card is in their possession.

It’s a very straightforward, casual title centered around the dice-rolling mechanic – an excellent filler game with a good amount of player interaction.  Long-time fans of King of Tokyo will find a lot of familiar ground is covered here, but with the new powers and additional actions available for destroying buildings and battling army forces, there is enough fresh material here to warrant a look.  Personally, I prefer this to King of Tokyo in every way as the achievement cards open up more strategies and the new die faces give players more options to consider (the dice in King of Tokyo had three numbered faces dedicated only to victory points).  IELLO prides itself on producing games that can be learned in minutes and are instantly fun to play.  This sentiment certainly applies here and, although some gamers may be turned off by the player elimination and dice-rolling elements, it’s absolutely worth picking up.