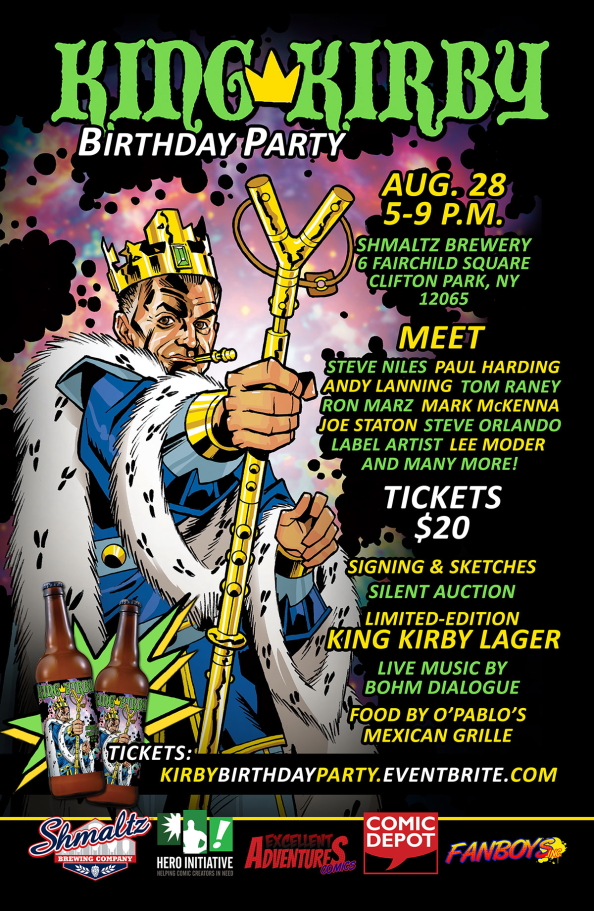 This year marks the 98th birthday of the late Kirby, widely regarded as the co-creator (along with Stan Lee) of the Marvel Comics Universe. Kirby co-created many of the superheroes being adored by fans of Marvel’s recent blockbuster movies, including the Avengers, the Hulk, Captain America, Thor, the Fantastic Four and many, many more.

“King Kirby Lager” is a special bottling of Shmaltz’s Slingshot Lager, featuring Jack Kirby himself on the label in art by comics stalwarts Lee Moder and Paul Harding. Limited Edition cases will be on sale exclusively at the Shmaltz Brewing Company tasting room the night of the event. A percentage of proceeds will be donated to Hero Initiative, a non-profit organization that helps comic creators in need. Each case contains one bottle with a special 3-D label.

“Last year’s Jack Kirby birthday party at Shmaltz Brewery was a great success in celebrating the amazing life and legacy of Jack Kirby, as well as in raising money for everything the Hero Initiative does,” said Hero Initiative President Jim McLauchlin. “I know everyone involved is working to make this year’s party an even bigger event. I can’t think of a better way to toast the King of Comics on his 98th birthday than with King Kirby Lager.”

The ticket cost of $20 include five samples of Shmaltz beers, a complimentary glass, a piece of Kirby birthday cake, and a chance at door prizes. There will also be a silent auction of special comic items donated by creators. Live music will be provided by Bohm Dialogue, and food will be available from O’Pablo’s Mexican Grille. Ticket and auction proceeds benefit comic charity Hero Initiative, which is also supported by the Kirby4Heroes campaign. Tickets will be available at the door, and online via Event Brite: kirbybirthdayparty.eventbrite.com.