Kotobukiya Adds Another Hero To Their Fine Art Avengers 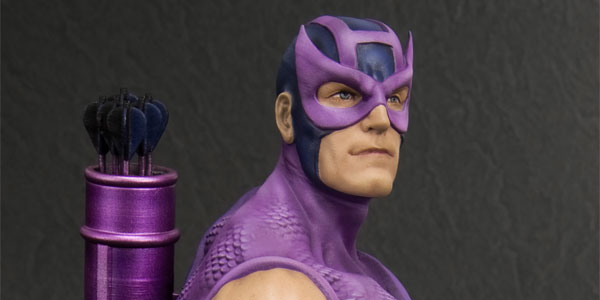 Kotobukiya has thus far released three of Marvel’s Mightiest Heroes in their Classic Avengers Fine Art series, and now a fourth hero will be joining the ranks of Iron-Man, Thor and Captain America… Hawkeye! 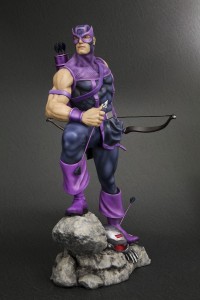 Kotobukiya’s Fine Art take on Hawkeye sees the archer in a great action stance that conveys a great sense of dynamic motion, and a display base that matches perfectly with those of his teammates to form a cohesive display.  I love a lot of Kotobukiya’s stuff– they really are at the top of the list when it comes to meticulous detail and a great sense of realism in statues– but the thing I dig most about their Fine Art Avengers series is the choice to base these statues on the most classic and iconic outfits worn by each hero.  All four statues look great, and I am sure they’ll look even better standing together. 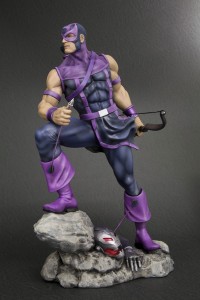 Created in 1964 by Stan Lee and artist Don Heck, Clint Barton was an orphan working in a carnival who learned archery to become a master marksman.  After dabbling in crime he chose the path of righteousness and became a costumed superhero, working alongside the Avengers for years and gaining huge popularity among Marvel’s readers.  Barton joins the original trio of Thor, Captain America, and Iron Man in his iconic original costume: HAWKEYE CLASSIC AVENGERS!  You’ve seen the latest incarnation of Hawkeye in the Avengers film and now you can celebrate his classic look in this amazing new Fine Art statue.

Wearing his traditional dark blue and purple costume, Hawkeye defends the Earth from the greatest threats with a smirk on his face and the Avengers to back him up.  The master archer stands on a rocky outcropping, resting his right arm on his knee as he surveys the battlefield looking for his next target. 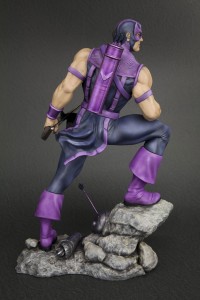 The hero’s sculpt really captures the character from the features of his classic costume to the subtle details of his pose like Barton’s thumb testing the edge of his bladed arrow and the flowing movement of his cloth-like tabard.  Every element of Hawkeye’s classic costume has been recreated from the skin-tight cowl with pointed mask and “H” logo to the scale mail-like chest piece, bracelets, and retro cuffed boots.  And while he holds his trusty bow and one arrow at the ready, look closely to see that the hero’s quiver is still fully stocked!  As a special addition, Hawkeye’s base even includes the severed arm and head of Avenger’s foe Ultron, with an arrow sticking out of the robot’s eye for good measure.

Sculpted by Erick Sosa, Classic Avengers Hawkeye stands nearly 13 inches tall (1/6 scale).  His rocky terrain base matches those on the other Classic Avengers, the previously released Thor, Captain America, and Iron Man so you can display them individually or as a team! 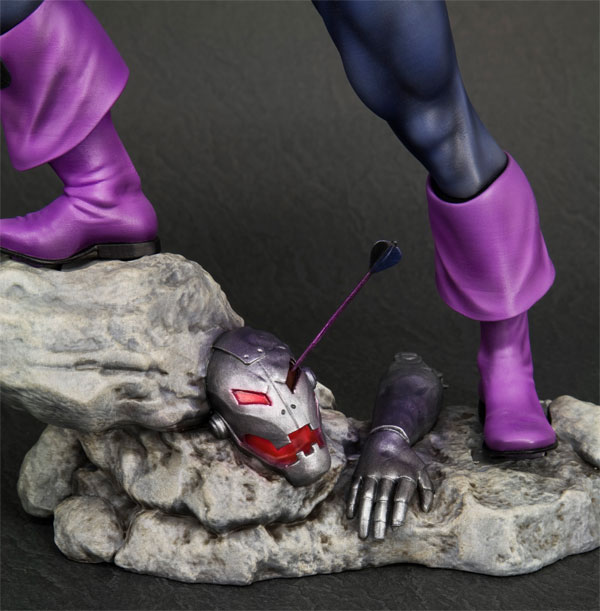