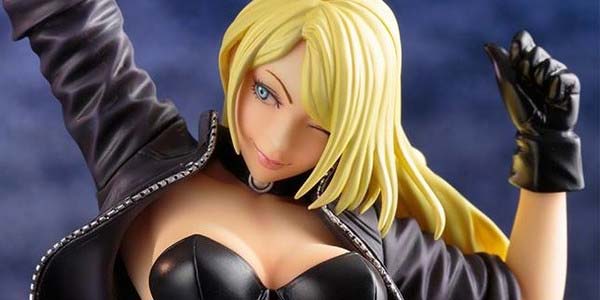 I think Black Canary is probably the longest-in-development statue in Kotobukiya’s DC Bishoujo Collection… and possibly their entire product line.  The DC hero was first announced years ago, and in the time since she has disappeared and re-appeared in Koto’s display cases at various conventions and trade shows, either as a sculpted prototype or master illustrator’s Shunya Yamashita’s concept artwork.

All along, Kotobukiya insisted that Black Canary was not canceled… they just reworked her a few times.  Perfectionists that they are, it took three unique sculpts for Kotobukiya to be happy with the Black Canary Bishoujo, and after seeing the end result of all their effort, I think she’s going to be worth the wait.  This is one gorgeous statue!

I like everything about this figure, from her casual but tough pose, to the subtle leather-like texture work on her jacket and corset, and of course, her omnipresent fishnets, which will be realized as soft goods overlays, adding yet another unique texture to the statue.

It’s a good year for me and the Bishoujo series… Kotobukiya is tackling three of the top characters on my wish list this year, with the release of She-Hulk, Zatanna and now Black Canary.  November can’t get here soon enough!

A Kotobukiya Japanese import! Kotobukiya proudly presents the next entry in their lineup of Bishoujo statues based on the superheroines and villains of DC Comics with the long-awaited Black Canary! A fierce martial artist who uses an ultrasonic “Canary Cry” in her battle against evil, Dinah Laurel Lance has served alongside the Justice League, Birds of Prey, and many other famous heroes including her longtime romantic partner Green Arrow. Black Canary makes her stunning debut in the Bishoujo series with traditional Japanese “pretty girl” styling based on a new character interpretation by Shunya Yamashita!Dinah Lance stands triumphant on the field of battle, reaching for the stars while rocking her classic costume. The Justice Leaguer is posed leaning slightly on one leg, her body angled with both hands up and her right arm held straight into the air. Black Canary’s sexy costume consists of a sleek bodysuit, high heeled boots, leather jacket, and gloves, all in shiny black. Of course she also wears her iconic fishnet stockings and bright blonde wig! Dinah is intricately detailed in both sculpt and paint application with clothing elements, hair movement, and a beautiful bishoujo-styled face.Sculpted by M.I.C., Black Canary stands 9 ½ inches tall (1/7 scale) on her specially designed display base. Display her alone or alongside other DC character Bishoujo statues from Kotobukiya like Batgirl, the Huntress, or Poison Ivy! 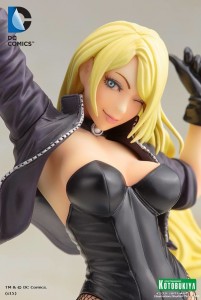 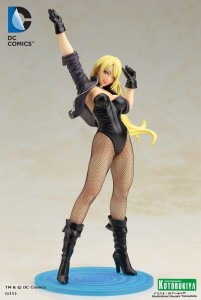 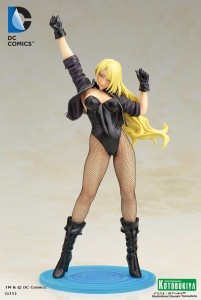 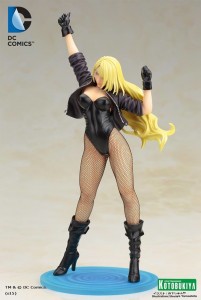 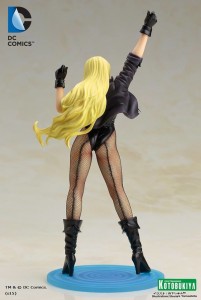 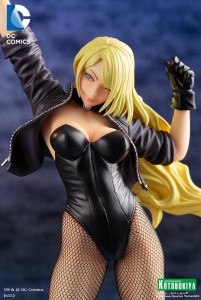