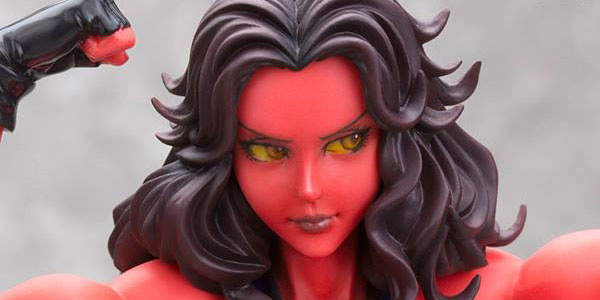 Last week, Kotobukiya debuted their fantastic ARTFX+ Alfred Pennyworth statue, but Bruce Wayne’s butler was only one of three exclusives Koto is bringing to Comic Con.  On the Marvel front, we’re seeing both a new variant of the ARTFX+ Deadpool statue, as well as an all new Bishoujo, based on the Red She-Hulk.

Both pieces look amazing.  I’m particularly partial to Red She-Hulk, who shares the same body as her green skinned counterpart, but with a stunning all new Bishoujo style portrait.  Having the two She-Hulks together is a display possibility kind of too good to pass up, in my opinion.

And the new Deadpool ARTFX+ variant– the third version of the Merc with the Mouth– shows off Kotobukiya’s sense of humor, with this Chimichanga Edition.  Wade Wilson features a new portrait with his mask lifted up and a mouth full of food… as well as a half-eaten chimichanga posed in his hand.  The statue also includes Headpool, another all new piece, which can float on its own or be held in an alternate hand in place of the chimichanga.

As in past years, Kotobukiya is offering preorders for all their exclusives to non-attendees, which is always great news for those of us sad sacks that can’t make it to Comic Con.  You can find te preorder links for Red She-Hulk and Chimichanga Deadpool in the descriptions below, along with more photos courtesy of Kotobukiya.

A Kotobukiya Japanese import! One of the most popular comic book Super Heroes in the business is back in a variation of his red and black costume, Deadpool! Formerly a member of the Weapon X program, the “Merc with a Mouth” is a longtime assassin for hire and independent agent who’s worked alongside just about every superhero and villain from the Avengers to X-Men and everything in between. Now the fourth wall-breaker invades your house, and this time he’s brought a chimichanga!

Created in 1991 by Fabian Nicieza and Rob Liefeld, Deadpool has never looked back and continues to appear in more and more books with his unique style and nonstop witty repartee, not to mention his trademark costume and extensive armory! Wilson makes a stunning debut in the ARTFX+ series as he crouches in preparation for the attack, drawing one of his swords from the sheaths on his back. This time Deadpool wears his iconic red and black costume with its abundance of straps, pouches, extra ammunition, spare weapons, pointy hood with his mask peeled back just enough to eat a chimichanga and display his scarred features, and of course his cute Deadpool logo belt buckle. In his low crouch the assassin leans forward with his other hand extended in front of him, and you can choose between interchangeable left hands that hold either a chimichanga or Headpool!

Sculpted by Junnosuke Abe, the same master craftsman behind the Marvel Now Avengers series, X-Force member Deadpool stands 6 inches tall (1/10th scale) in his deep crouch with perfect stability on his included magnetic display base. Deadpool is of course awesome all on his own, but he also works great with teams and looks fantastic alongside the Avengers and other upcoming Marvel ARTFX+ statues from Kotobukiya!

Pre-orders for non-attendees begin Friday, 6/19 at 10AM PST on kotous.com! 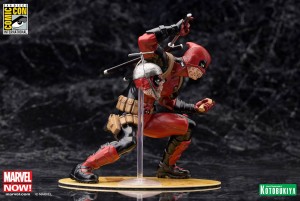 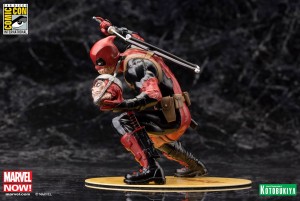 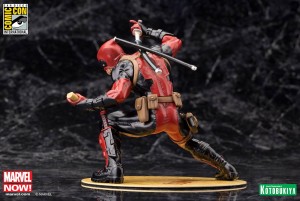 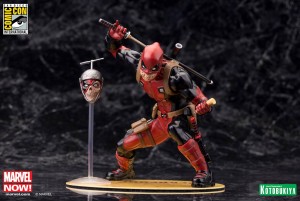 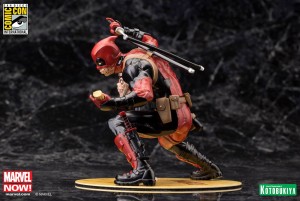 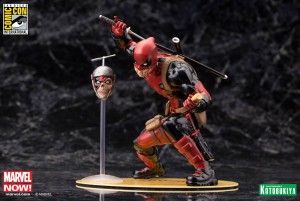 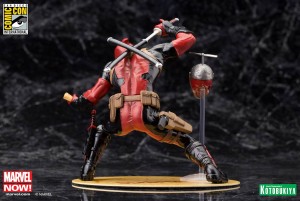 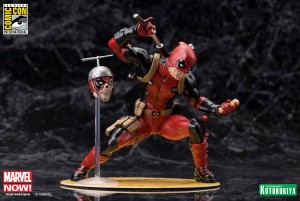 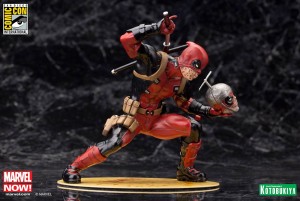 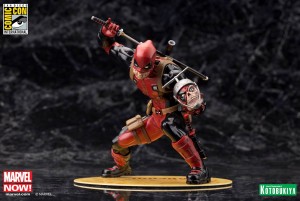 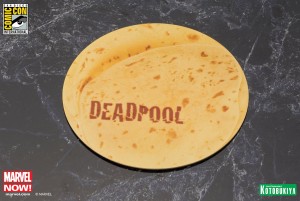 A Kotobukiya Japanese import! The Marvel Bishoujo collection, bringing you new interpretations of familiar superheroes and villains, adds Betty Ross to the lineup in her Red She-Hulk guise! Resurrected from death, Betty finds that she has also been subjected to a process that granted her superhuman physical power that transforms her in the behemoth known as Red She-Hulk.

Taking a moment to pose after a hard-fought victory, Red She-Hulk stands on a battered street flexing her considerable muscles. Red She-Hulk wears a form-fitting black body suit with purple striping that accentuates her out of this world physique, with matching boots and fingerless gloves. Powerful and deadly, Red She-Hulk is heavily muscled but still feminine and beautiful, a look perfected by this Bishoujo presentation. Red She-Hulk smiles at you with the fully confident that her power and beauty will guarantee a place in your collection!

Red She-Hulk stands just over 9 inches tall (1/7 scale) as she poses on her smashed street terrain base. There’s nothing to fear with this powerful red beauty on your shelf!

Limited to just 1500 pieces, an exclusive pre-order for non-attendees begins Friday, 6/26 at 10AM PST on kotous.com! 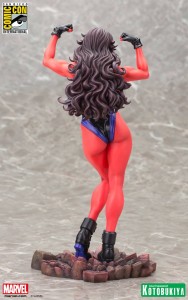 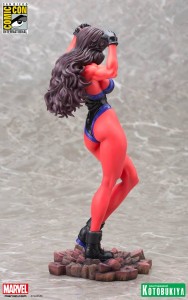 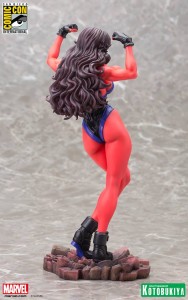 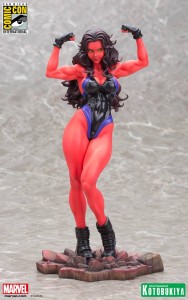 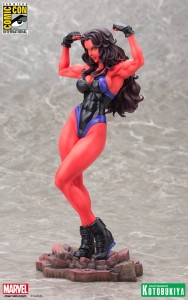 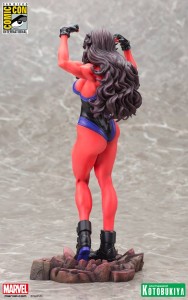 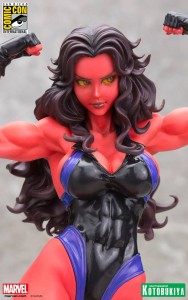 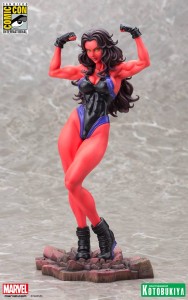 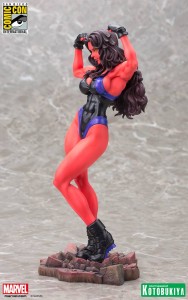 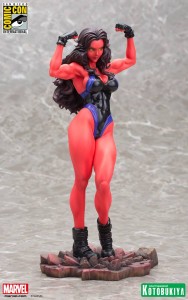