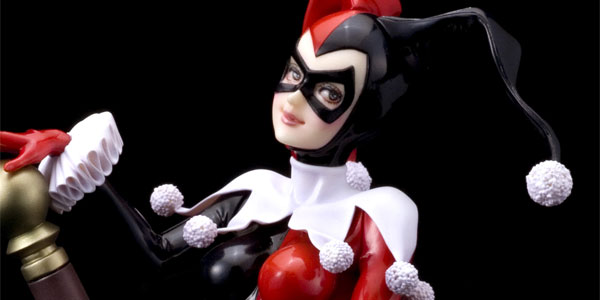 Kotobukiya is certainly on a roll with their fantastic Bishoujo collection, and the latest DC femme fatale to join the list is the Joker’s main squeeze, Harley Quinn!

With her animated origins, sexpot attitude (at least toward her beloved “Mista Jay”), and her legions of worshipping fans and cosplayers, I’m pretty surprised it’s taken this long for Harley to get tapped for her own Bishoujo statue. But with an excellent sculpt of the maniacal Bat-villain straddling a cartoonishly gigantic hammer in her classic harlequin costume, she’s well worth the wait.

Here’s what Kotobukiya had to say about their latest DC Bishoujo:

A KOTOBUKIYA Japanese import!  Coming up next in the DC Comics Bishoujo Collection (combining DC’s super heroines and villains with traditional Japanese stylings) is the fan favorite wacky psychologist turned harlequin super villain, HARLEY QUINN!  First appearing in Batman: the Animated Series and then the pages of DC Comics, Harleen Quinzel was originally a brilliant doctor working with patients at Arkham Asylum before she was seduced by the “clown prince of crime” and became the Joker’s girlfriend and assistant.  Her villainous ways have brought her into conflict with Batman many times over the years, and she’s found a good friend in the similarly deranged Poison Ivy.  Because of her mental instability and affinity for hilarity, Quinn frequently employs comically oversized weapons like her favorite giant hammer.  Based on an original illustration by Japan’s renowned Shunya Yamashita, Harley appears here for the first time in the Japanese Bishoujo (pretty girl) style!

Harley Quinn shows off her silly and violent natures as she poses seductively just for you.  Perched on her enormous hammer, the sultry psychotic looks adorable in her trademark black, red, and white harlequin costume that hugs all of her curves. Harley’s sculpt is fantastic with careful attention paid to her sexy body, the cloth-like movement of her collar and hood, and the fringes on her wrists.  With Quinn’s stunning Bishoujo-style face and wonderfully sculpted and painted costume, you won’t need to be as crazy as the Joker to want her around.

Constructed of high-quality PVC plastic and standing 10 inches tall (in the ultimate 1/7 scale) on her exclusive hammer base, Harley Quinn was sculpted by Masahiro “Gill Gill” Takahashi.  Display Harley on her own or together with other DC Bishoujo statues like Poison Ivy and Batgirl! 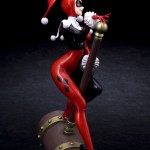 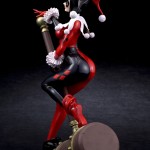 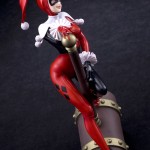 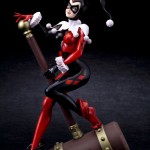