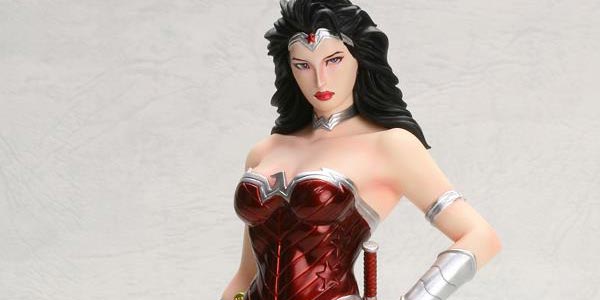 Kotobukiya reveals the latest in their line of ArtFX+ Justice League statues, and Wonder Woman has rarely looked better.

The New 52 Justice League ArtFX+ statues by Kotobukiya have been phenomenal.  Their designers’ dedication to detail, from sculpted intricacies to a variety of paint finishes– metallic, high gloss, flat matte– make for some very nice, completely uniform pieces– Koto’s Justice League will surely look great together on a shelf. 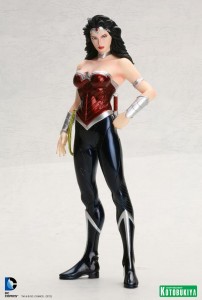 The latest statue revealed by Kotobukiya is Wonder Woman, whose unpainted prototype was first seen last Summer at San Diego Comic Con.  A lot has changed for our favorite Amazon since then– she now shares the same paint style as her fellow Leaguers, with an excellent metallic finish to her armor.  I love the work done on Diana’s face here, too– some folks online have complained about her Roman nose, but I think it’s the perfect look for the Amazon, an amalgamation of her appearance as drawn by both Jim Lee and Cliff Chiang, which until I saw this statue I’d say would be impossible.

The only thing that bums me out is the pants, which DC wisely eliminated from their New 52 Wonder Woman within a single issue.  I’m sure Koto’s statue was started before that decision was made, when all the key art showed Diana with full pants, so I get why they chose that rarely seen look, but seriously, I’m really hoping we see a variant of this statue with her iconic shorts instead, because she’d be perfect.

Check out the full press release– and photos– from Kotobukiya on the new ArtFX+ Wonder Woman:

A Kotobukiya Japanese import! Kotobukiya’s line of DC Comics “New 52” ARTFX+ Statues continues, capturing the new looks and costumes of heroes in the Justice League. Joining the previously announced Superman, Green Lantern, Flash, Aquaman, and Batman is the Amazonian warrior Wonder Woman! Born of Zeus and Hippolyta, Diana was a princess on the paradise island of Themyscira before venturing out into the wider world of humanity. Her first major appearance (in the relaunched New 52 continuity) was the great battle against Darkseid’s Parademons in which she teamed up with other heroes to form the Justice League.

The magnificent Wonder Woman stands poised with a warrior’s strength and a god’s grace. Always ready for battle, Diana wears her iconic costume as reinterpreted by Jim Lee in the New 52. Along with her stars and stripes bodice she rocks full pants and tall boots. Wonder Woman’s left hand is balled into a fist at her waist, always near
the short sword at her back, while her right hand rests over her Lasso of Truth. Of course, no Wonder Woman would be complete without her bracelets and tiara! The Amazon princess features intricate sculpted details in her unique outfit from the stars and eagle design on her top to the subtle armor and paneling on her pants and the creases in her boots. Diana’s face captures the character’s austere beauty and fierce determination.

Standing 7 ½ inches tall (in the ARTFX+ 1/10th scale), Wonder Woman was sculpted by master artist Atelier Bamboo. She has magnets in her feet for perfect stability on her included display base (with Justice League logo), and naturally she’ll look great on your shelf next to the rest of her powerful allies. Stay tuned for the final member of the team coming soon, Cyborg! 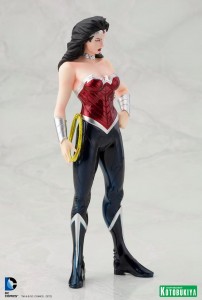 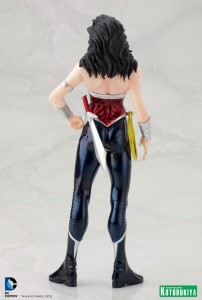 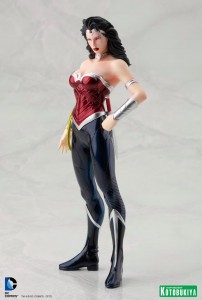 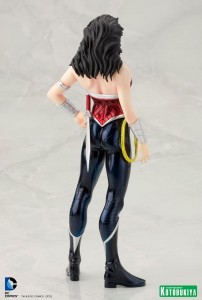 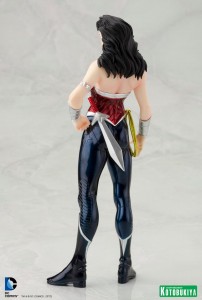 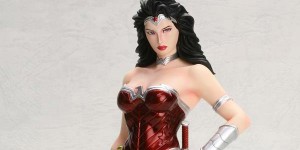