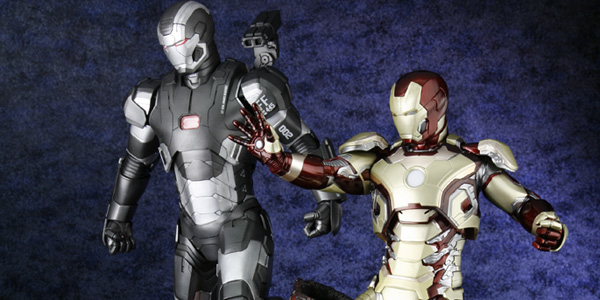 When it comes to high-end statues and collectibles, few companies compare to Kotobukiya.  Their upcoming Iron-Man ARTFX statues are further proof of the validity of this statement.

Both Tony Star (in his Iron-Man 3 Mark 42 armor) and James Rhodes (in the Iron-Man 2 War Machine gear) make for a great pair of statues, and even though they never share the screen together in the Marvel movies, the pair look fantastic on display together.

Each piece will set you back about $130, but if you’re in the market for some exquisitely sculpted, totally movie accurate Iron-Man movie statues, you’re not gonna find anything better than these guys.

Here’s all the details on both statues, direct from Kotobukiya:

A KOTOBUKIYA Japanese import!  This summer one of the most popular Marvel superheroes returns to the silver screen.  In the first two Iron Man films as well as the Avengers Robert Downey Jr. has played the perfect Tony Stark and his heroic alter ego Iron Man, with incredible special effects bringing his armored forms to life like never before.  Following on the massive global success of the superhero team up movie Marvel is bringing the fans even more armored action with Iron Man 3 this May!  Joining the previously announced Mark VII in the Iron Man 3 ARTFX Statue lineup is a new armored suit from the upcoming movie, IRON MAN MARK 42!

After surviving imprisonment by terrorists, billionaire industrialist Tony Stark created the Mark II armor suit.  This was followed up soon after by the iconic Mark III suit used to battle Stane and his Iron Monger suit at the culmination of the first film, and the upgraded Marks IV, V, and VI armor in the sequel.  He went even further with the Mark VII in Avengers, using the high-tech armor to take on the army of the Chitauri.  Now we get a sneak peek at the ultimate powered armor in Stark’s Iron Man 3 Mark 42.  Similar to the Mark VII, the new version is a sleek machine with overlapping plates and a unique segmented look.  Iron Man blasts into action, churning up water beneath him with his thrusters.  The dynamic pose catches the superhero leaning back as he fires his repulsor ray from his outstretched right hand, clenching the left for a follow up attack.  The Mark 42 is resplendent in metallic red and gold with a subtle new pattern unlike any of the armors before it.  This version also comes equipped with an amazing LED light-up feature in his eyes and arc reactor; three settings (Off, Continuous On, and triggered by the built-in sound detector) let you choose how and when Iron Man activates for battle!

Iron Man Mark 42 stands 15 inches tall (1/6th scale) hovering over the lifelike water effect.  This pre-painted, snap-fit ARTFX Statue is easy to assemble so you can have your Iron Man on display in no time.  Arriving this summer along with the release of the film, the Mark 42 is just the first Iron Man 3 ARTFX statue from Kotobukiya; there are more to follow!

A KOTOBUKIYA Japanese import!  This summer one of the most popular Marvel superheroes returns to the silver screen with Iron Man 3.  Featuring Robert Downey Jr. as Tony Stark, the film also sees the return of his stalwart ally James Rhodes played by Don Cheadle.  And like last time when he got to suit up and join the action, “Rhodey” will once again be donning his own armor as the fearsome WARMACHINE!  After proving his ability to operate the powered suit once before, James too gets an upgraded armor in this film with a sleek new look, and you can get your hands on the incredible piece of technology as he joins the Iron Man 3 ARTFX Statue line alongside Stark’s Mark 42!

In Iron Man 2 Rhodes joined Stark in battle with a specially designed armor suit that focused on heavy weaponry.  In the sequel he utilizes the “Mark II” War Machine armor, just one of several new designs seen in the film.  The upgraded suit (which also serves as the basis for the Iron Patriot design) trades in some of the bulk from the previous incarnation for a sleeker, but no less tough, look that’s translated into a powerful ARTFX Statue.  War Machine joins the fray as he hovers in the air next to a ruined pipeline, scanning the battlefield for potential threats.  The armor suit features incredible detail with a sculpt that brings the intricate armor to life with all of its segmented panels, armor plates, shoulder-mounted weapon, and cool technological elements.  Even the pose is striking as the armor seems to float in midair; with one knee raised up, fists clenched at his sides, and head angled down War Machine is impressively intimidating.  Of course, his paint job adds to that as well… while Tony may prefer bright red and gold for his armor, the War Machine suit is a cold and somber black and silver with white lettering and symbols as well as electric pink details at its eyes and chest-mounted arc reactor.

War Machine is nearly 15 ½ inches tall (1/6th scale) and reaches almost 18 inches mounted on his incredible flying georama base.  With pre-painted, snap-fit parts the ARTFX Statue is easy to assemble.  Let War Machine guard your collection and display him alongside the other Iron Man 3 statues Mark 42 and Iron Patriot! 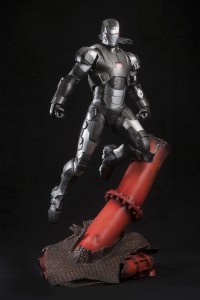 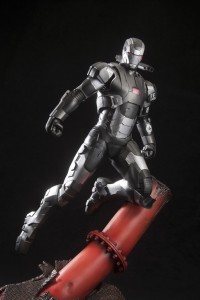 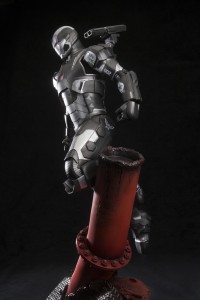 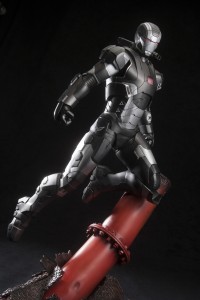 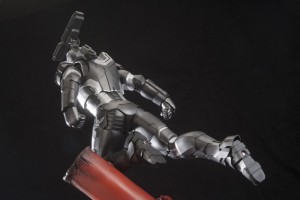 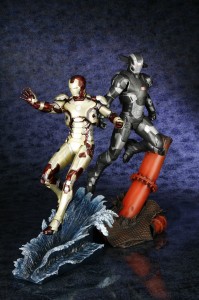 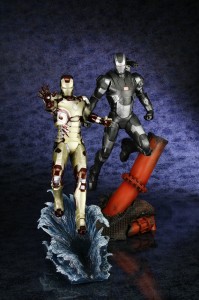 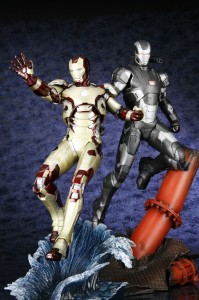 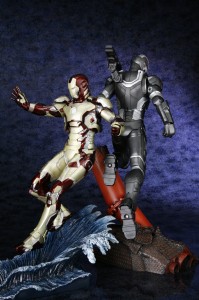 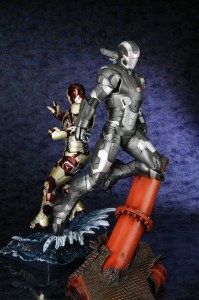 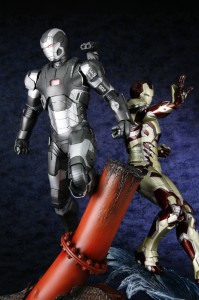 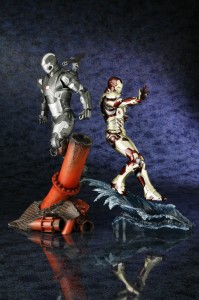 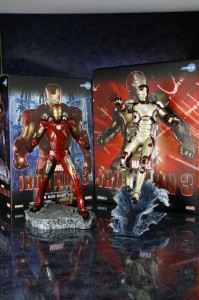 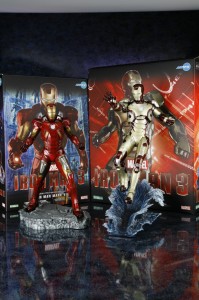 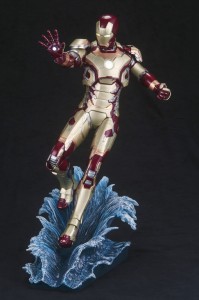 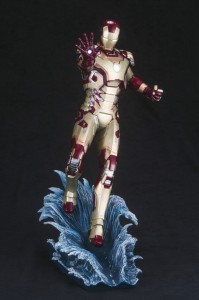 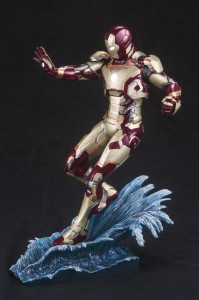 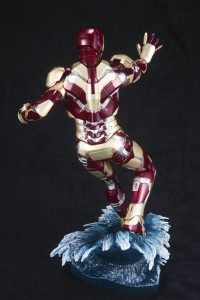 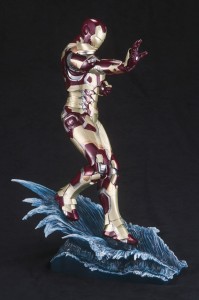 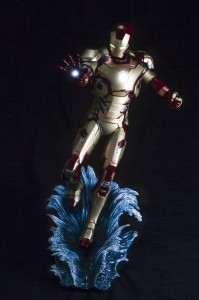