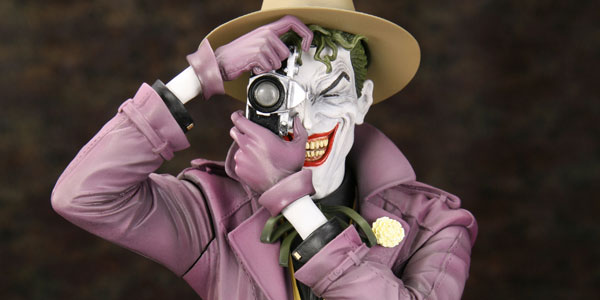 It seems like every major convention brings with it one new reveal that’s so cool, so perfectly executed, it’s a show-stopper. Kotobukiya won the reveal game at this year’s New York Comic Con, with the debut of their impossibly great new Joker statue.  Based on Brian Bolland’s artwork from the seminal Alan Moore graphic novel, the Killing Joke statue captures Batman’s arch nemesis in the same pose as the iconic cover art, as the madman grins his twisted smile while aiming his camera, with even more menace implied than if it were a gun.

Not only is this statue another gorgeously realized piece by Kotobukiya, it also features a very fun gimmick– a motion-activated LED flash and shutter sound.  I can’t wait to be walking past this statue in the middle of the night and experience The Joker snapping a shot of me– so cool!

Junnosuke Abe’s sculpt really nails Bolland’s look, brilliantly realizing one of comics’ most infamous covers in three dimensions. And the best part? Koto is releasing this 11″ piece, complete with the lights and sound, for under $150, making this one of the best bargains I’ve ever seen for a statue of this magnitude.

A KOTOBUKIYA Japanese import!  With plenty of Batman statues released over the years, Gotham city’s most evil is out to take revenge on the world.  Joining the ranks of such greats as The Dark Knight Returns Batman vs. Joker is another classic Batman story come to life in BATMAN THE KILLING JOKE THE JOKER!  A 1988 graphic novel by Alan Moore and drawn by Brian Bolland, The Killing Joke is a story about Joker and how he came to be the Clown Prince of Crime.  Other than an interesting origin story for him, the book also features one of the most famous scenes in the history of comics: Joker shooting Barbara Gordon (which would in turn lead to her becoming the hero Oracle).  Almost as famous as its contents is Joke’s iconic cover image, captured for the first time as an ARTFX Statue!

Featuring a portrait inspired by the graphic novel cover art coupled with an original pose by Kotobukiya, this new statue brings the maniacal clown to life as you’ve never seen him before.  Joker stands with one foot resting on a crate of dynamite, smiling his huge toothy grin as he snaps a photo on his old school film camera.  The sadistic villain’s costume is incredibly detailed, showing off every seam, cuff, button, crease, and more on his purple three-piece suit and trench coat.  His outfit is even topped off by authentic studded spats, fedora, iconic white gloves, and lapel-pinned flower.  The Joker’s elongated white painted face leaps right off of the graphic novel cover with its deep laugh lines, left eye squeezed shut, and unruly green hair peeking out from under his hat.  There’s even a motion sensor built into the base that activates an LED spot lamp and camera shutter sound after a brief delay.  As an added bonus, the lamp is movable and can be placed at any angle around the statue!

Sculpted by Junnosuke Abe, The Killing Joke Joker stands 11 inches tall (1/6th scale) on a special display base that includes the broken crate of dynamite, LED lamp, and a creepy cherub henchman.  The Joker is an incredible statue capturing one of the most famous graphic novels of all time, and he’ll look great on display or alongside other DC Comics-inspired statues from Kotobukiya like the Batman Black Costume Ver.  Lights, camera, action! 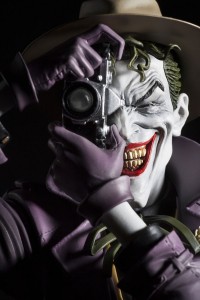 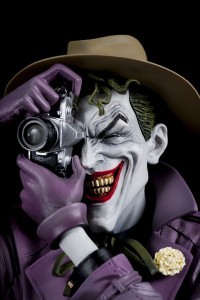 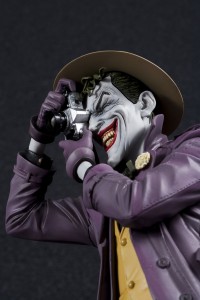 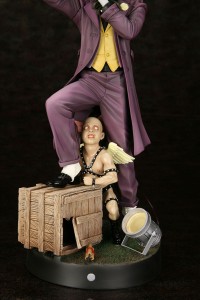 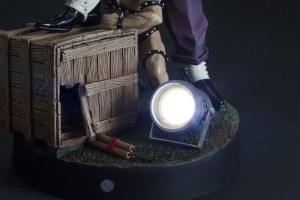 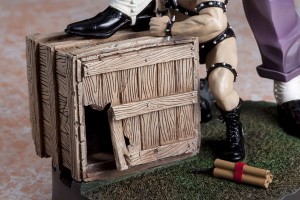 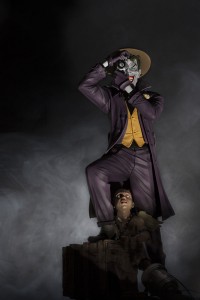 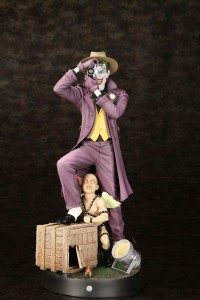 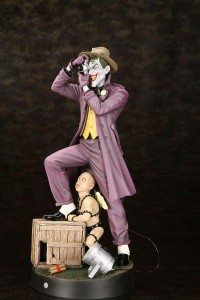 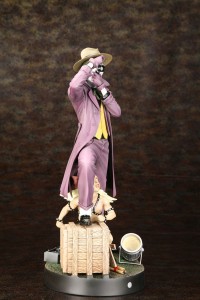 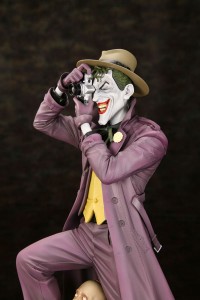 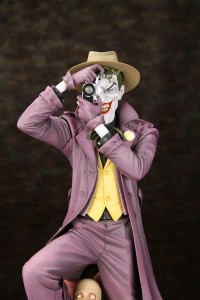 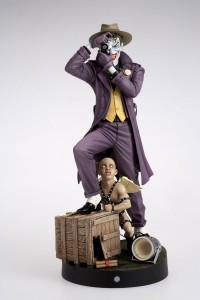 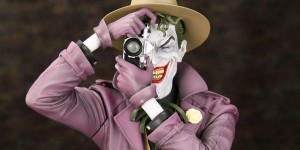