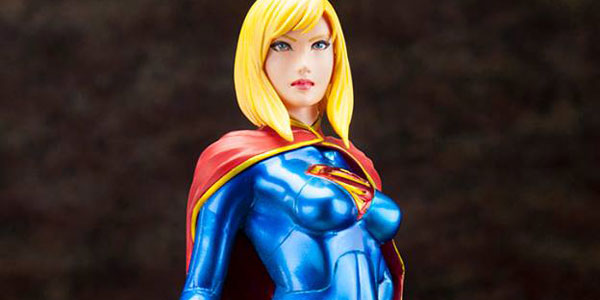 The latest DC super hero from Kotobukiya is stunning.

Kotobukiya’s ARTFX+ based on DC Comics’ New 52 has produced some amazing pieces already, but their recently revealed Supergirl may be the best yet.  This statue is absolutely stunning, and will fit in perfectly with the rest of the ARTFX+ lineup.

Kara is depicted in her current New 52 costume (not a terrible update on her classic look), and as always Kotobukiya packs in the detail, with each line of her armor and even the trim of her cape and collar really standing out.  She’s a gorgeous piece, and has me ready to finally jump in on this remarkably nice collection.

Here’s what Kotobukiya has to say about Supergirl… as well as some more photos of the upcoming statue:

A Kotobukiya Japanese import! Kotobukiya’s line of DC Comics “New 52” ARTFX+ Statues continues after the mighty Shazam and Black Adam with one of the most popular female characters in all of comics, Supergirl! Another Kryptonian crash landed on Earth, Kara Zor-El wakes up in Siberia not realizing that she’s on a different planet or that her homeworld has been destroyed. Initially distrustful of humanity and of her cousin Kal-El, Supergirl nevertheless learned to embrace her new home and its residents, becoming a hero and using her incredible Kryptonian abilities against Worldkillers, Black Banshee, and more!

A youthful and innocent heroine, Supergirl is constantly learning about the new world around her as well as her own new powers under the Earth’s yellow sun. In this fantastic new presentation she’s ready to take on anyone who tries to control her, standing proud and defiant in the face of any danger! Her strength is matched with her femininity as she poses with one leg slightly bent at the knee and one hand at her waist while the other is balled into a fist and held at the ready. Turned slightly, Supergirl regards you with all the focus of her attention, her perfectly sculpted face framed by her beautiful blonde hair. The Kryptonian’s distinctive New 52 costume is recreated with extreme attention to detail and includes the unique thigh high boots with exposed knees, half-body suit in gleaming metallic colors, and calf-length cape. The statue’s paint highlights all of the great details with bright, vivid colors exemplified by the “S” shield on her chest.

Supergirl stands just over 7 ½ inches tall (in the ARTFX+ 1/10th scale) atop her included display base with magnets in her feet for added stability. The powerful young hero looks great displayed all by herself, and she’s a perfect addition to the previous New 52 Justice League series! 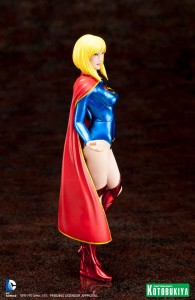 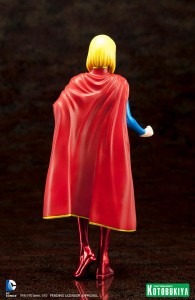 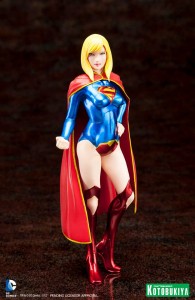 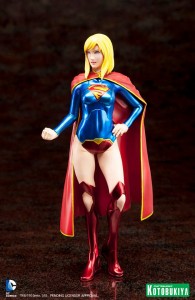 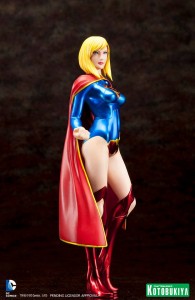 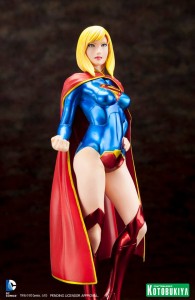 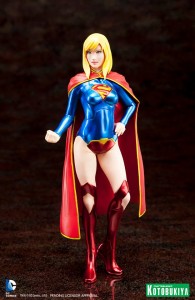