It’s getting pretty late in the game, but there’s still time to shop locally for that last-minute gift idea! Luckily, Diamond Select Toys is shipping a whole variety of new products to comic shops nationwide on Wednesday, December 23rd!

This week’s New Toy Day sees the arrival of products from Aliens, Marvel, Back to the Future, The Muppets, Batman: The Animated Series, The Nightmare Before Christmas, Godzilla, Tarot, and Universal Monsters! Read on for details, then find your nearest comic shop at comicshoplocator.com, and see what they have in stock! 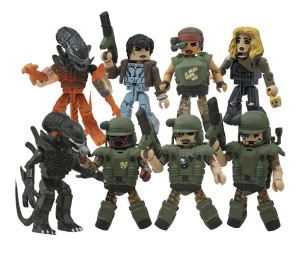 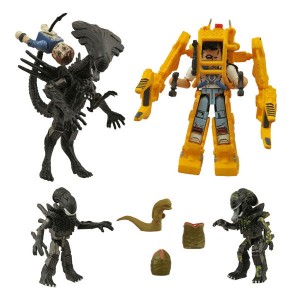 The game is not over, man! DST returns to the world of the classic 1986 action movie Aliens with an all-new assortment of 2-packs, including include Pvt. Vasquez with Pvt. Hudson, Jumpsuit Ripley with Newt, Pvt. Frost with Burning Alien and a rare, one-per-case set that has Pvt. Crowe with Attacking Alien and Eggs! Each 2-inch Minimates mini-figure features 14 points of articulation and fully interchangpeable parts and accessories. And if you’re ready to level up, you can get two deluxe-sized sets containing two deluxe-sized Minimates! Ripley’s Power Loader comes with Ripley and a Battle-Damaged Alien Warrior, while the Queen Alien comes with Bishop (who can be impaled on her tail) and an Alien Warrior. Plus, both sets come with Alien eggs, facehuggers and chestbursters!

http://www.diamondselecttoys.com/aliens-minimates-deluxe-power-loader-alien-queen-asst
Back to the Future 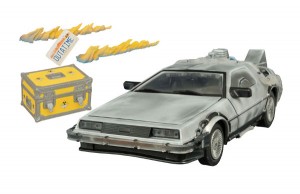 Is it hot? No, it’s ice cold! DST revisits their bestselling Electronic 1:15 Scale Time Machine from Back to the Future in a new, 30thAnniversary edition box set! Having just arrived in our time from 1985, this Version 1 Time Machine features lights and sounds, plus a thin coating of “frost” over its entire surface, to replicate the effects of time travel. Bonus accessories include flaming tire tracks, a license plate you can pose like it’s spinning, and a case of plutonium! (Not actual plutonium.) Set comes packaged in a full-color window box. 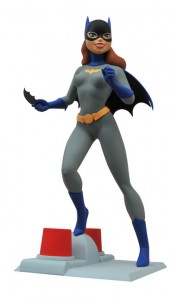 Gotham City’s gorgeous guardian is the next Femme Fatales PVC Statue to come out of Batman: The Animated Series! Based on Bruce Timm’s timeless designs, this 9-inch scale statue depicts Batgirl, a.k.a. Barbara Gordon, in full crimefighting mode, and is the perfect addition to your Femme Fatales statue collection. And the line continues when Batgirl is joined by the Clown Princess of Crime, Harley Quinn! This 9” scale PVC statue captures the Joker’s partner-in-crime standing on top of the Bat-signal after defacing it with a can of spray paint! That oughta impress Mr. J! Also available: Supergirl and Poison Ivy! (Item #JUL152194, SRP: $45.00)

Tarot: Witch of the Black Rose 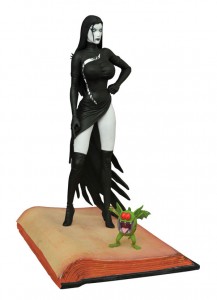 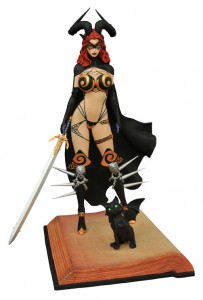 The original Tarot Femme Fatales statues were some of DST’s most popular ever, so DST is reteaming with Broadsword Comics for an all-new take on the titular enchantress and her sister! Featuring entirely new sculpts, these PVC figures of Tarot and Raven Hex measure approximately 9 inches tall atop open-book display bases, which combine to form the full tome. Raven includes a sword and her pet cat Pooka, while Raven comes with the goblin Mudwart. Each comes packaged in a full-color window box. 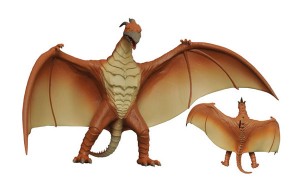 Whether you be a friend, foe, or Godzilla himself, beware the coming of Rodan! The giant winged pteranodon began his film career as a threat to Godzilla and the world, but since then has become one of Godzilla’s occasional allies, battling invaders from outer space to protect his home planet. This 8” vinyl bank is based on Rodan’s appearance in 1993’s Godzilla vs. MechaGodzilla II, and has a wingspan of 10 inches! With a coin slot on the back and a removable head, the recipient will be able to save their change for the next Godzilla bank release! 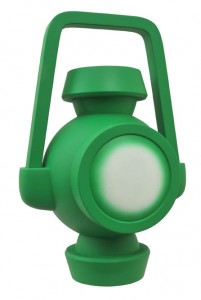 Know someone who always wanted to join the Green Lantern Corps, but couldn’t afford the gear? Now you can save the galaxy and save some green at the same time! This nearly 12” tall vinyl bank is designed after the Green Lantern power battery seen in the Justice League animated series, but with a coin slot on top and an access door in the base, making this more than just your average prop replica. It’s just like a real power battery, except instead of storing energy, it stores your change! Packaged in a clear polybag. 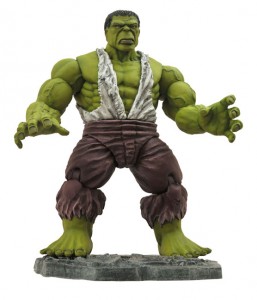 Based on the character’s earliest appearances, this all-new Savage Hulk action figure wears the tattered outfit that harkens back to his origins, when nuclear scientist Dr. Bruce Banner was caught in an atomic blast and first transformed from a man into a monster. Sculpted by superstar Marvel Select sculptor Gabriel Marquez, this Hulk figure stands approximately 9 3/4″ inches tall with 14 points of articulation. He comes packaged in oversized Select-style packaging, perfect for display or storage, with reference artwork on the spine. 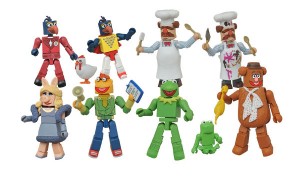 For the Muppet fan in your life, which should really include everyone, it’s the launch of a new Miniamtes mini-figure line! This first series of two-packs features the Muppet Show’s greatest stars, including Kermit with Miss Piggy, Fozzie with Scooter, Gonzo with the Swedish Chef, and Stunt Show Gonzo with a “Batter-Damaged” Swedish Chef. Each Minimates mini-figure features up to 14 points of articulation, as well as interchangeable parts and accessories. Each two-pack is packaged on a full-color blister card.

The Nightmare Before Christmas

The beautiful creation of Dr. Finkelstein, Sally now has her very own coffin to relax in! The star of Tim Burton’s stop-motion masterpiece, The Nightmare Before Christmas, this 16-inch tall doll of Sally is a must for any loved one who embodies the spirit of Halloween. With a fully articulated body and a real cloth costume, this exacting re-creation of the classic Sally figure will rest comfortably in her coffin-shaped window box until the times comes for her to rise once again! Limited to 1993 pieces! 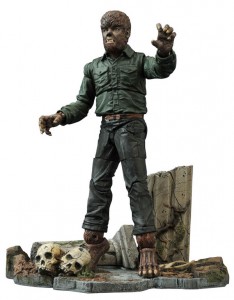 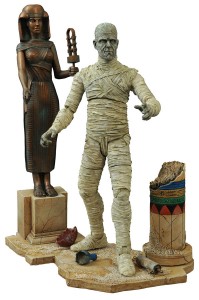 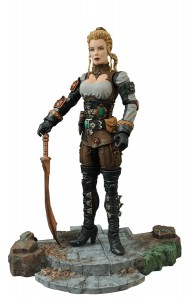 For the monster kid in your life! Not seen since the first series of Universal Monsters Select action figures back in 2010, the Mummy and the Wolf Man return in all-new editions, completely resculpted by Jean St. Jean with approximately 16 points of articulation, as well as all-new diorama bases depicting the inside of an Egyptian temple and the ruins of a tomb, respectively! Plus, the newest original monster character from DST is none other than Lucy Westenra, the would-be bride of Dracula turned vampire hunter. Each figure comes packaged in the famous Select-style display packaging, with spine artwork for easy shelf reference.