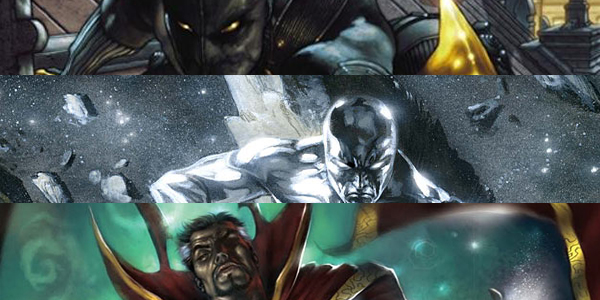 Stan “the Man” Lee has has some loose lips the last few weeks, dropping information in some upcoming Marvel movies.

Comic Con is right around the corner, the father of the Marvel Universe is excited about some upcoming movie projects.

During a panel at Wizard World New York Lee talked about what heroes might be on the big screen as part of phase 2 or 3 of the Marvel movie universe.

It is no surprise that these three were mentioned by Lee, all three have been talked about for years, but it is a good sign that they have not been dropped. What did come as a surprise was that Lee also mentioned another famous hero, The Silver Surfer.

“There is no way they won’t eventually do a ‘Silver Surfer’ movie. It may not be for a few years because they’re thinking and working on ‘Doctor Strange,’ ‘Black Panther,’ ‘Ant-Man,’ ‘Guardians of the Galaxy.’ But they’ll get around to a ‘Silver Surfer’ feature because he’s a wonderful character.”

Previously the Silver Surfer was part of the second Fantastic Four film, but with the rights still at Fox the character would not be part of the larger Marvel movie universe. There were some rumors that Marvel was working with Fox to get the Surfer back, but there was no confirmation, yet.

Will any of these films be announced at SDCC?  We have about a week to go until we find out.