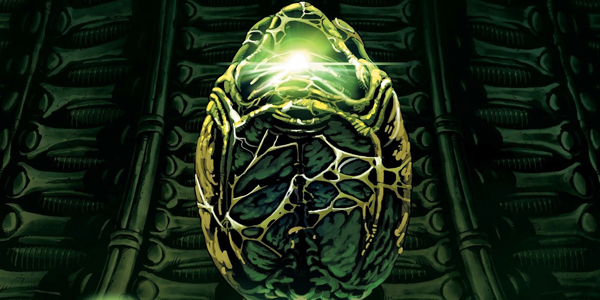 Upper Deck made a splash in 2012 when it published Legendary, a robust deck-building game based in the Marvel Universe.  Debuted at this year’s GenCon, Legendary Encounters now takes that experience, streamlines it with an improved ruleset and tighter mechanics, and immerses it in the Alien franchise, thematically following the storylines from all four films. 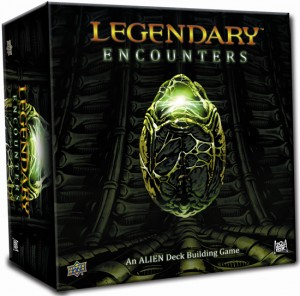 At its core, this is a fully cooperative deck-builder in which players must struggle to survive xenomorph attacks while working together to complete scenario-specific objectives.  There are three linked scenarios that correspond to each of the four Alien movies that can either be played together to follow a similar narrative to that film or randomized for some crazy new setups.  Inside the box, I was surprised to find a playmat included as opposed to a mounted board.  The playmat rolls nicely into a divider inside the box, which is actually the only insert provided.  This is a bit of a contrast to a stellar insert included in the original Legendary but still perfectly functional as sleeved cards can be stored on either side of the divider with the foam shipping material that secured everything initially still keeping everything in place.  There is still ample room (more than half the box) left for inevitable future expansions as well.

With 600 cards in this set, the initial sorting of each character and building of each deck is a chore but there are included dividers that make it easy to find what you need in the future and, luckily, you will only use a relatively small amount of these cards during any game setup.  At the beginning of the game, “role” cards are distributed which display health/armor stats and grant each player with one unique card in their deck.  These cards all allow for an additional card draw when played and have special effects on gameplay such as healing wounded players or boosting attack ratings during combat.  The play area is set up according to the labelled areas on the playmat – there is a face down “strike” deck, a Hatchery deck containing only facehuggers and chestbursters (to be used during certain game events), a deck of Sergeants, as well as decks for the “Hive” and Headquarters.  Assuming the setup wasn’t random pulls; the Hive and HQ are built according to the film scenarios you are playing through.  For example, the cards suggested for a game thematically representing the first movie, “Alien”, feature iconic characters such as Parker and Dallas as well as threats like Ash.  Players will work together to accomplish tasks like blocking off the ventilation system with the ultimate goal being to trap the “Perfect Organism” in the airlock and then flush it off the ship.

This is, of course, easier said than done as Legendary Encounters can be brutally difficult.  The aforementioned Hive deck consists of the cards related to each of the three goals the players are working toward, with the cards for goal three shuffled and put on the bottom, and the cards related to the first goal on top with additional cards from the “Drone” deck shuffled in throughout depending on the number of players.  This is how the game scales its difficulty to challenge groups of four or five.  At the start of each player’s turn, they take the top card from the Hive deck and place it in the Complex.  The Complex is a series of spaces allocated on the playmat representing various areas within your current location.  The cards being added could be enemies, hazardous situations, or in rare instances, survivors, but are added to the Complex face down as the players have not discovered them yet.  Since there is a limited number of spaces in the complex, the cards that reside there are pushed further down on every turn unless they are cleared out.  If a card is pushed out of the last Complex area, it is flipped over to its face side (if it had not been flipped already through “scanning” which I’ll touch on in a bit) and added to the Combat area.  At the end of a players turn, they draw a Strike card for each enemy in this area – having three or more enemies in this area usually means you are in trouble so you want to keep their numbers down. 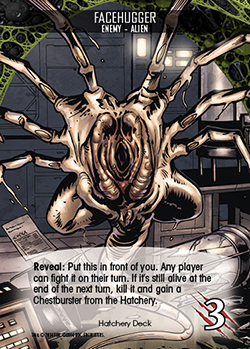 After the Hive card is added to the Complex, the active player can begin playing cards from their hand.  At the onset of the game, players will only have access to their starting deck – 7 Specialists (which each grant 1 unit of currency for recruiting new characters), 5 Grunts (which each contribute 1 Attack value), and their unique role card.  There are always five character cards face up in the HQ area to purchase if you have drawn enough currency-providing cards to afford them.  Once acquired, they are put into your discard pile along with every other card you had played during that turn.  When your draw deck runs out, the discard pile (now with the new, more powerful cards you had obtained) will be shuffled to form the new draw deck.  Characters have varying costs but Sergeants always cost 3 and can be bought blindly from a face-down pile next to the HQ.  They are all identical with the exception of their class affiliation symbol.  Each character card has a small symbol in the top left corner which is referenced for some actions that require a card of a specific type to have been previously played on that turn in order to trigger its effect.

Cards that list an attack value can be used for two purposes; fighting enemies or scanning rooms in the complex.  Each room has a scan value associated with it that must be matched in order to successfully scan the area.  The card is then flipped up and any “reveal” actions are carried out.  If an enemy alien was scanned, players may be able to get a jump on it and kill it before it hits the combat area and starts damaging players.  Revealed enemies in the Complex cannot fight players directly but players can battle them.  Enemies that have already made it out of the Complex and are primed to strike can be fought as normal.  Since many of the enemies are difficult to overcome, especially after spending much of your attack points to scan a room, “Coordinate” cards are key in this game.  Every Sergeant card and many characters feature this keyword, which allows players to play the card in front of them during another player’s turn.  The active player plays a virtual copy of that card, which may provide additional currency or attack.  This is the best way to afford impossibly expensive characters and destroy the toughest foes.  The player who played the coordinate card would draw a replacement and discard the played card.  At the end of each turn, the player would discard their hand and draw back up to their hand limit of six. 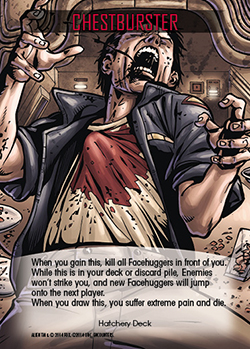 The mechanics present here make for a tense experience where the threat level escalates each round.  Games are typically won by the skin of your teeth and usually with some casualties.  To make things even more interesting, there are several variants for players to try out, including hidden agendas which could make a player in your group a Carter Burke-like betrayer.  And remember the Hatchery deck I mentioned before?  Normally, if a game event instructs the active player that they’ve encountered a Facehugger, that card is taken from the Hatchery and placed in front of them.  It is up to that player and the player after them to kill the creature.  If, within those two turns, they fail to remove it, the Facehugger impregnates the player and a Chestburster card is placed in their discard.  Once that card is drawn, the player dies and is out of the game.  With the included Alien Player deck, however, players killed in this fashion can remain in the game and actually take the role of a xenomorph actively trying to eliminate the other players.  It’s such an awesome concept and something that adds an extra level of suspense and difficulty to the game.

Legendary Encounters is a ton of fun for up to five people and completely hinges on how well you and your group can work together to coordinate attacks and purchase the right cards that you can best form combos with.  The rules and mechanics are straightforward and simple but the game itself is tough as nails.  As opposed to the original Marvel-themed set, each unique card has its own artwork, the text is easier to read and understand, there’s no individual scoring system (which really had no place in a cooperative game to begin with), it’s a bit more story-oriented, and the theme just fits so well with it.  The artwork is largely pretty great as well, borrowing heavily from the style of the old Dark Horse Comics series with the exception of the Strike cards, where they opted for a painted style.  Upper Deck nailed the aesthetic, the color palette, and the overall “feel” of the franchise and, while I had my doubts, I’m happy to say that they did right by the license, delivering an outstanding game with a ton of replayability.