The Lego Movie Review: Inspired Fun For Everyone 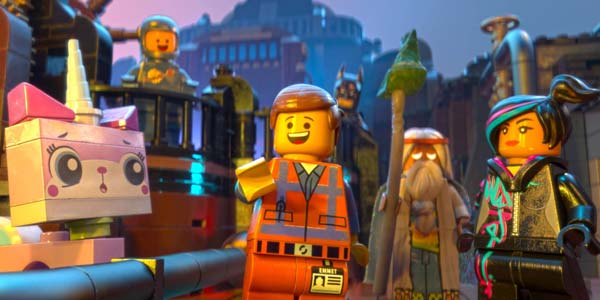 The Lego Movie is the perfect combination of charm, laughs, smarts and heart.

The Lego Movie is certainly not the first motion picture based on a toy, but I’m hard pressed to think of another one that comes close to packing the same laughs, creativity and heart into its story.  This movie actually has a lot to juggle, and it does so in a way so deft and confident and well-executed that you won’t realize until after the credits role that you just saw something on par with Pixar’s very best.

The basic through line of the first two acts of The Lego Movie are simple– Master Builder Vitruvius (Morgan Freeman) has predicted “The Special” will rise to put an end to the tyrannical rule of Lord Business (Will Ferrell), who plans to use his secret weapon “The Kraygle” to put an end to all Lego life as they know it.  However, things go awry when The Special appears to be average schlub Emmet (Chris Pratt), a construction worker lacking creativity, smarts, friends and, well, any considerable talents, really.

Emmet teams up with Wyldstyle, Batman, a robotic pirate named Metalbeard, the block-shaped Unikitty and 80s space man Benny to begin a hero’s quest like many we’ve seen before.  What’s great about this setup is how well it flows while simultaneously poking holes in the “chosen one/ unexpected hero/ hero’s quest” tropes.  The movie never misses a chance to gently jab at the conventions of these kinds of rags-to-riches hero tales, while still managing to feel like a solid entry in that same genre.

The supporting cast here is amazing, featuring great vocal work from very funny people like Charlie Day, Elizabeth Banks, Nick Offerman, and Alison Brie, but it’s Will Arnett’s Batman who really steals the show.  Using his gravely voice to sound convincing as the Dark Knight, while also playing up the egocentric, vain nature of the character, Batman is the ultimate alpha male of the minifigure world, and he steals the show every moment he is on screen.

Hot on our hero’s trail is Lord Business’ henchmen robots, lead by Bad Cop (who’s had the Good Cop alter ego on the reverse side of his head erased from existence by a Q-Tip and bottle of nail polish remover).  Emmet and his friends travel through a remarkably well thought-out Lego universe, featuring different worlds such as the Wild West, a fantasy land, outer space and Lord Business’ evil stronghold.  Each set piece has its own unique look and denizens, and we never stay too long in any one location; if anything, I was left wishing there was more time to explore some corners of these great little brick worlds.

Aside from the excellent pacing of the story and the rapid-fire gags, snickers and belly laughs that keep coming throughout, The Lego Movie also features some astonishingly great animation.  Seamlessly combining stop motion work with actual Legos and computer animation, the final result is a world that feels practical and tactile, and which follows the rules of Lego toys in perpetually amusing ways.  Whether it’s the artificial way in which the wind sweeps Wyldstyle’s hair (it swivels from the top of her head) to the little crack in the bottom of the space man’s helmet, the details packed into this movie are both authentic and instantly charming.  That doesn’t even mention the cameos, which I won’t spoil here, and the music by Devo’s Mark Mothersbaugh only enhances the light, fun feel of the film.  Stand out tunes like “Everything Is Awesome” are the kind of infectuously catchy songs that will get stuck in your head for days after a single listen.

As the characters cross over between worlds more and more, I felt like a kid again immediately, remembering those days when I’d have Batman and Luke Skywalker and the Ninja Turtles all team up for the ultimate adventure.  The Lego Movie completely understands the sheer joy of what it’s like to be a kid, playing with toys, but it’s the final act when things are escalated to a whole new level.  It’s hard to discuss without spoiling it, but the childish simplicity of our hero’s quest and the world-traversing sandbox approach to the Lego universe come into a surprising new light thanks to one great reveal late in the film.  Not only is this twist a surprise, but it really struck a chord with me on a personal level, as a grown-up toy collector.

It’s this finale that makes The Lego Movie something more than charming, and ramps it up to Pixar levels on the emotions chart.  The entire movie is great at capturing the magic and fun that is playing with toys, but it’s the ending which brings home the value of playing together.  It’s incredibly smart, incredibly tight storytelling, and I guarantee it will get more than a few adult toy geeks like me all misty eyed in the theater.

I didn’t have the highest of expectations going into The Lego Movie.  I figured I’d be in for a fun, silly story spotlighting some cool cameos and lots of Lego’s current crop of toy lines.  What I got was all that, but much, much more.  Loaded with charm, smarts and heart, this is a remarkable movie for kids of any age, a simple story well told, with wonderful characters and an amazing lived-in plastic world that I could get lost in for hours.  But what The Lego Movie really left me with was an appreciation for the magic of toys, and the imagination they can spark in all of us.