Exclusives! Giveaways! And a 2017 preview! Here’s what LEGO has in store for San Diego Comic-Con…

LEGO always puts on a great show at Comic-Con, and this year should be no exception. The LEGO booth will offer a look at what’s coming in 2017 for their biggest properties including Marvel, DC, Star Wars, NINJAGO, and more… plus a first look at the all new BrickHeadz figure sets, and the latest LEGO Ideas project, Adventure Time (!!!).

Comic-Con will also be the first place to purchase the debut BrickHeadz sets… as well as two exclusive minifigures of Hydra Captain America and Ray Palmer from legends of Tomorrow, which LEGO will be giving away to lucky Con-goers all weekend.

Here’s all the LEGO news from Comic-Con… be sure to check back later this week for live coverage from the LEGO booth and more, right here on Kastor’s Korner!

“Each year our team looks forward to attending San Diego Comic-Con to unveil new products and life-sized LEGO models inspired by some of the most popular entertainment properties in the world,” said Amanda Santoro, brand relations manager, LEGO Systems, Inc. “This year, show attendees will be the first in the world to preview our new, fan-friendly, collectible line of LEGO BrickHeadz, share a photo moment with new LEGO statues, and lend a hand to LEGO Master Builders as they assemble larger-than-life LEGO models.”

Scheduled for 2017 availability, LEGO BrickHeadz is a new collectible play experience that allows builders to create, collect and display versions of iconic characters and super heroes out of classic LEGO bricks and elements. To celebrate the new collection, four limited-edition LEGO BrickHeadz sets—each containing two buildable characters inspired by renowned super heroes across movies and comics—will be sold in limited quantity at the LEGO booth for $40 each. 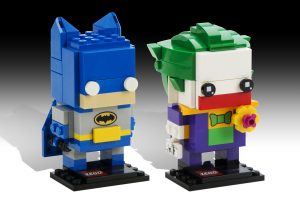 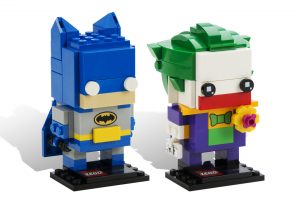 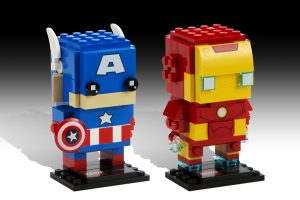 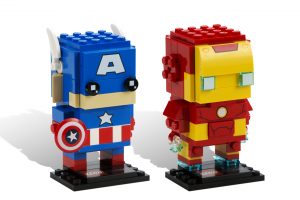 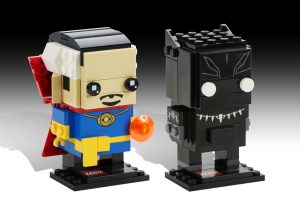 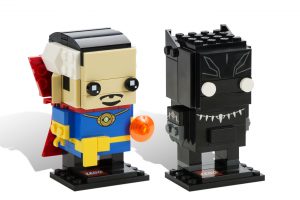 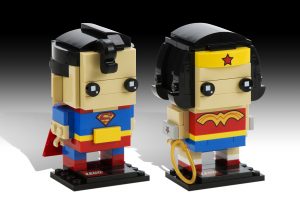 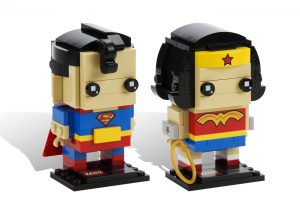 Before heading to the big screen on February 10, 2017, The LEGO® Batman Movie’s Batman™, Batgirl™ and The Joker™ will share center stage at the LEGO Booth. Together with LEGO Master Builders, attendees can build a large-scale model of Batman on Thursday, followed by Batgirl on Friday and The Joker on Saturday. Fans will also get to preview two LEGO building sets, The Batmobile and The Joker™ Notorious Lowrider, inspired by the film, and take a selfie to share via social channels on-site with LEGO Batman using a custom brick-built “Bat Booth.” There will also be talent signing with the cast of The LEGO Batman Movie in the LEGO Booth on Saturday, July 23rd. A life-size version of LEGO Batman made entirely out of 53,998 LEGO bricks will be making a special appearance at the WB booth, #4545. 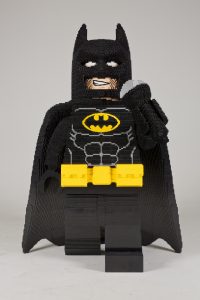 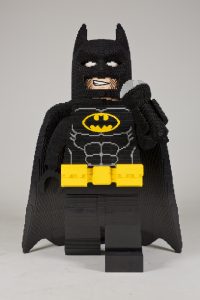 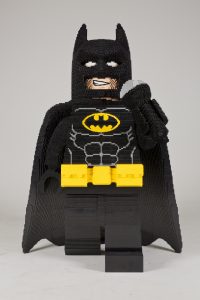 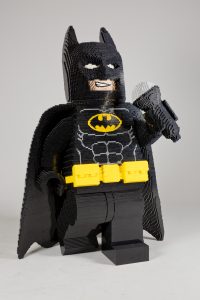 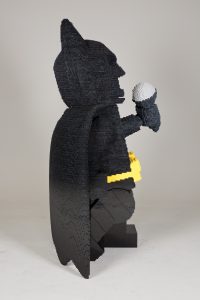 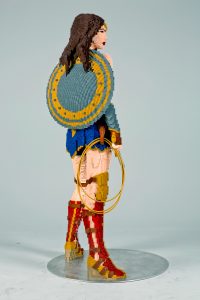 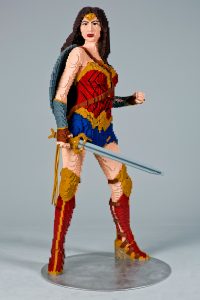 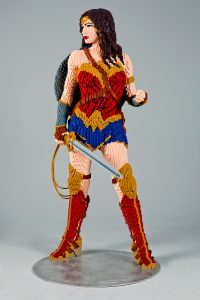 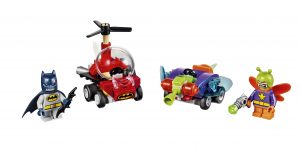 A LEGO minifigure version of “Ray” Palmer as The Atom, from the popular CW TV series DC’s Legends of Tomorrow, will be given away to lucky winners on Thursday, July 21 and Saturday, July 23. 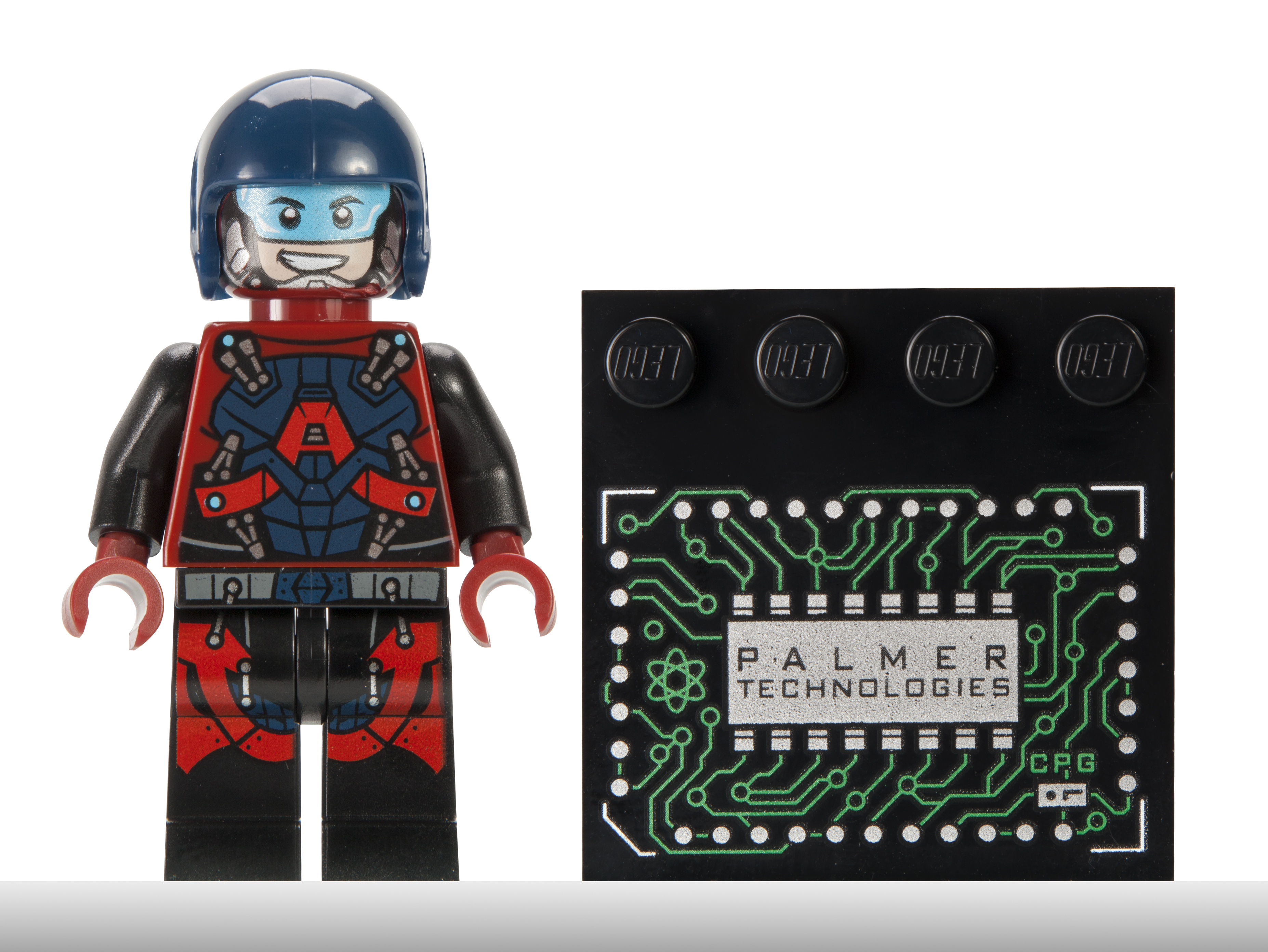 Inspired by the blockbuster film Marvel’s Captain America: Civil War™, a 6-foot tall LEGO model of Captain America™ made entirely out of 25,984 LEGO bricks will stand proud at the LEGO booth. 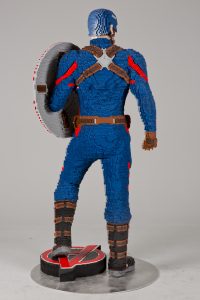 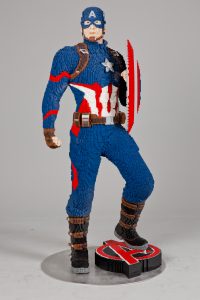 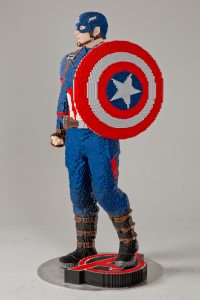 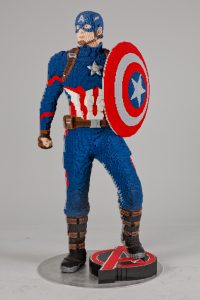 Prior to its January 2017 availability, fans can preview the ultimate Hulk™ mashup in the LEGO MARVEL™ Super Heroes Classic Avengers: Hulk™ vs. Red Hulk™ building set. 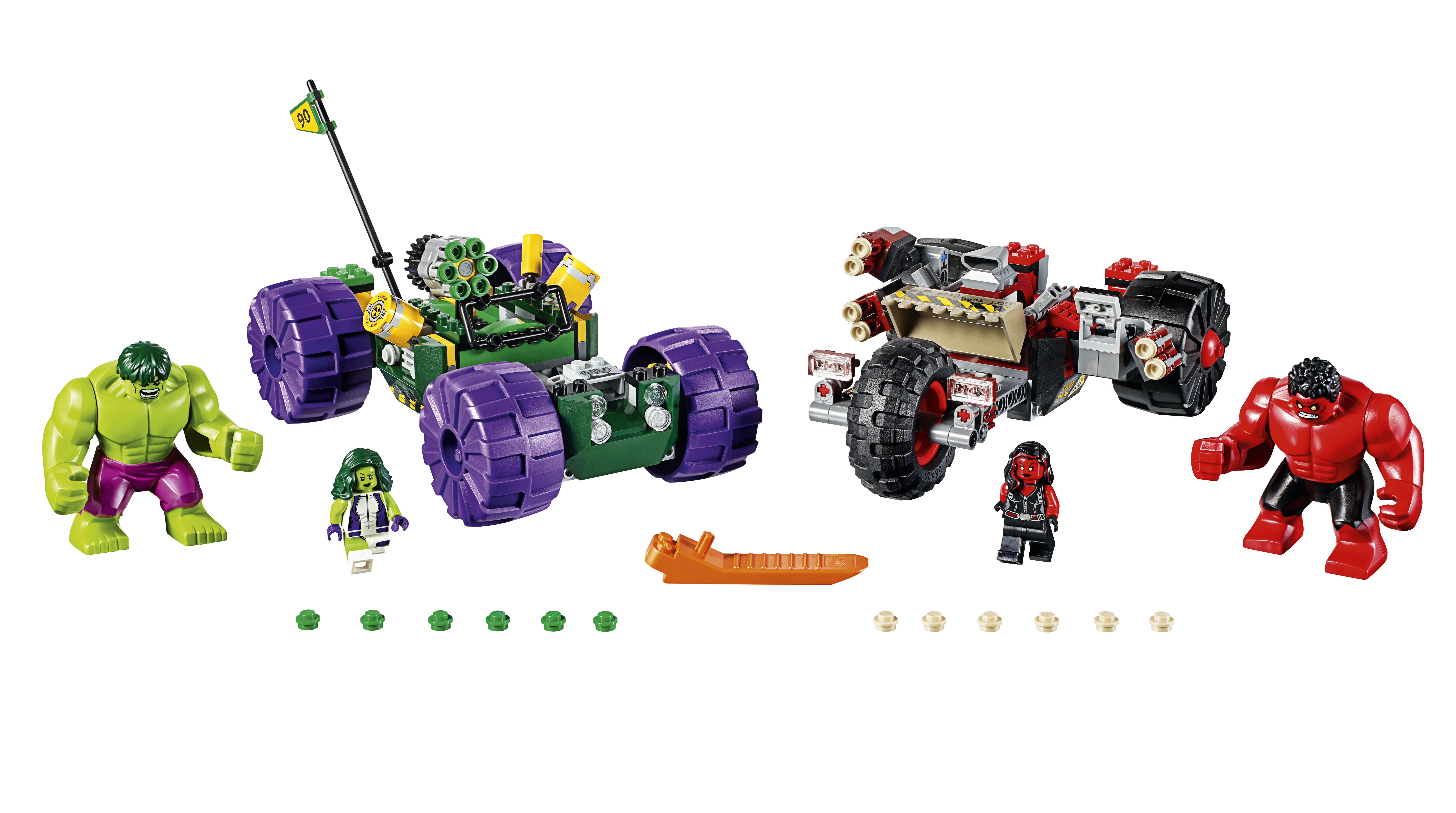 The fun collectability of LEGO® Super Heroes Mighty Micros is expanding within the MARVEL universe with three new sets on display, including Iron Man vs. Thanos, Spider-Man vs. Scorpion and Wolverine vs. Magneto.

Attendees can enter to win a LEGO minifigure version of Steve Rogers as Captain America on Friday, July 22 and Saturday, July 23. 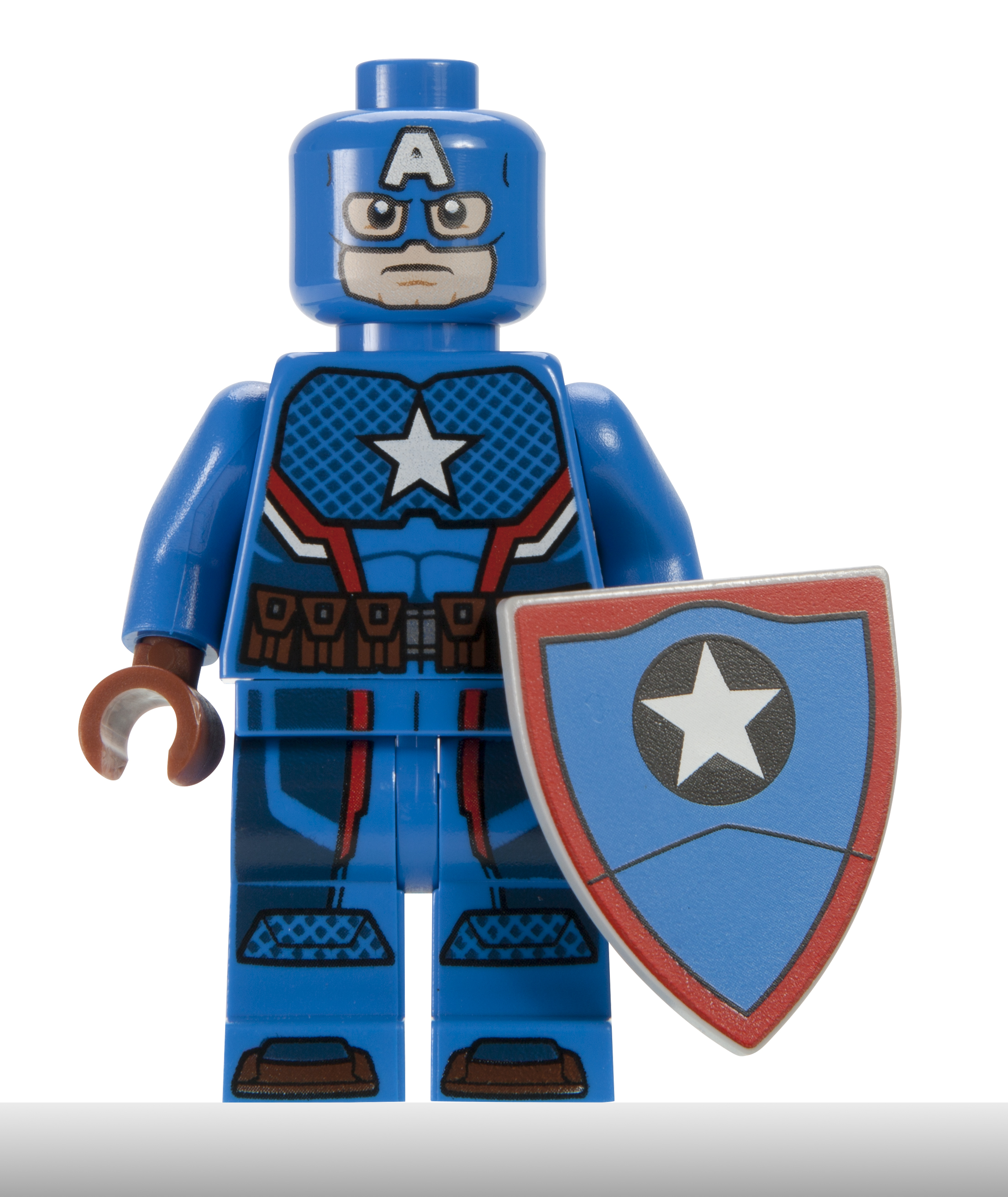 LEGO Star Wars™ fans eagerly awaiting the upcoming film premiere of Rogue One: A Star Wars Story will be thrilled to see an over 6-foot tall life-sized model of the film’s new Death Trooper™, which took LEGO Master Builders 349 hours to build and contains 27,202 LEGO bricks.

In celebration of the sixth season of Cartoon Network’s popular NINJAGO™: Masters of Spinjitzu™ and the 2017 feature film, a large-scale LEGO model of one of the playtheme’s iconic ninja apprentices, Jay Walker, will be at the LEGO booth. Equipped with his signature Nun chucks of Lightning, the model is made entirely out of 64,148 LEGO bricks and stands 51” high. 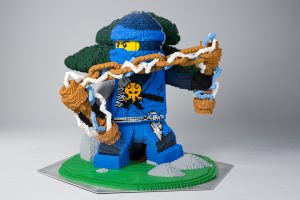 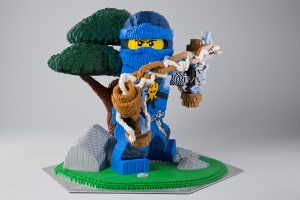 While purchase and fulfillment of exclusive LEGO BrickHeadz sets will take place in LEGO booth #2829, attendees must first visit the Pavilion Terrace to participate in a random drawing to qualify to buy, beginning as early as 6 am daily. Each of the four exclusive retail sets will be sold on separate days of the show, with a limit of one set per attendee per day. Tickets to purchase must be redeemed on the same day or purchase is forfeited.

To secure an opportunity to receive a LEGO minifigure giveaway, show attendees should visit the Pavilion Terrace at 12:30 pm each day to enter an instant drawing giveaway, to be fulfilled on the spot while supplies last. One drawing per person per day.

Fans who are not attending SDCC have a chance to win the exclusive LEGO minifigure giveaways and Exclusive Retail Sets via Twitter by following @LEGO_Group and the hashtag #LEGOSDCC.