Lincoln Is The Perfect Subject For Spielberg 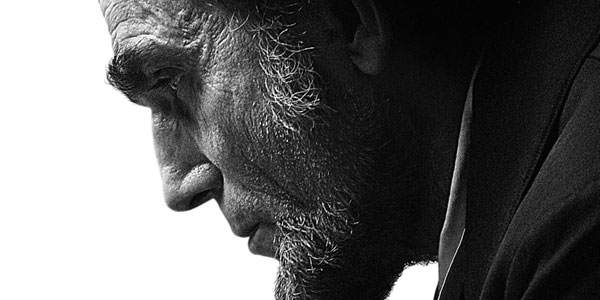 Steven Spielberg’s Lincoln gives the legendary director the perfect subject for his own strengths, and weaknesses.

A political thriller mashed up with a historically accurate period drama doesn’t make for the easiest movie to imagine, but that’s the exact mix of Steven Spielberg’s Lincoln.  The film chronicles a short span of the life of the iconic 16th President, from the start of his second term through to his death (there is no way that warrants a spoiler alert, sorry), as he crusades to get the 13th Amendment to abolish slavery passed through a heavily-divided House of Representatives.  The movie offers a strong, smart and painstakingly accurate character study of Abraham Lincoln, the man and the political figure, who turns out to be the perfect subject for Spielberg as a director.

Much like the President, Spielberg is a great storyteller, with a love of great storytelling. The director keeps a strong focus on this similarity, with many divergences that follow Daniel Day Lewis’ Lincoln as he rolls effortlessly into another recollection or parable, vaguely associated to the subject at hand. The President’s tendency to ramble gets on the nerves of both his opponents and advisors, but he remains resolute and blissfully ignorant to their criticism, another aspect the historied and sometimes-criticized director shares with his protagonist.

More than anything, Lincoln is a great orator, capable of delivering stirring, heart-swelling speeches filled with the same inspirational magic as the best of Spielberg’s films, and as always the director soars whenever these moments arrive– we all know the story of the end of slavery, but Spielberg still manages to make each pitfall feel genuinely dangerous and each victory seem thrilling.  But what moves Lincoln past typical Oscar-bait fare is the focus on the mechanics behind these magical moments.  Spielberg is well known for wearing his heart on his sleeve, and there’s a side of Lincoln that clearly does this, but it’s tempered by a look behind the curtain, at the real human beings behind these larger than life characters and what it actually takes to make those moments of magic become reality.

The emotional spectacle of Lincoln as a living legend may be the heart of the movie, but the political intrigue makes up the muscles and frame, and it’s fantastic and notably more procedural than one might expect from Spielberg. As expected, Daniel Day Lewis positively nails it as Lincoln, using the iconic beard and stovepipe hat, along with a few prosthetics and an awkward, historically-accurate inflection to completely transform into the beleaguered President. Day Lewis is one of the great actors of our generation, and his turn here as Lincoln is another major win in his fantastic catalog of characters. There’s a playfulness to Lincoln that seeps into every moment he’s on screen, as he seems to secretly love facing opposition, tormenting his colleagues even more than his political opponents, and his ability to sway, combat and fortify opinions with his words is always made clear as his best– and often only– weapon.

Tommy Lee Jones has been getting a lot of buzz for his role as radical lifelong abolitionist Republican Thaddeus Stevens, and he is great, the uncompromising elder statesman whose opposition to Lincoln comes not on a disagreement of Lincoln’s push to abolish slavery, but Stevens’ belief that simply freeing slaves isn’t going far enough.  Jones is perfect in the role, fierce and ready to spit hellfire at anyone who stands against him, and he has his own smart-ass streak, not far from the President’s own.

As great as Jones is, the best performances go to James Spader, John Hawkes and Tim Blake Nelson as a trio of lobbyist scoundrels tasked with acquiring the swing votes Lincoln needs to pass his Amendment. Every scene with these three– especially when they’re interacting together– is absurdly entertaining, and they are the ones doing the dirty work behind the scenes that let Lincoln be the icon he has become. It’s dirty business, framed in a very funny series of encounters featuring the trio conning, conspiring and bribing their way to Lincoln’s victory.  I never would have imagined teaming up these three great actors, but after watching their chemistry on screen, I would love to see a movie with them as the stars.

Sally Field as Lincoln’s softspoken but vitally influential wife Mary and Joseph Gordon Levitt as their eldest son Bobby don’t have quite the same impact, but they both give solid, nuanced life to their characters, especially considering their limited roles– this is absolutely Abe’s movie, and the focus perpetually remains on Lincoln the President, not the family man. Bobby’s story feels sort of tacked-on, and doesn’t offer any major resolution, and in many ways Mary’s story is the same, never going past the surface-level story of the mentally-unstable but deeply loving wife, as she struggles to support her husband.

There’s a few other problems with the movie in addition to the soft focus on Lincoln’s family. While the political side of the film offers the interesting dichotomy between Spielberg spectacle and sometimes-shady backdoor dealings, there are a few moments that feel heavy-handed in a not-surprising Spielberg fashion. The worst is the truly clunky ending, clearly Spielberg’s attempt at a money shot to add a stylistic punctuation to the ending of his story– a shot of the candle on Lincoln’s death bed zooms in to reveal the President delivering a speech, and it is not only completely unnecessary but cheapens the striking realism of the actual finale as Lincoln’s family and closest friends gather around their fallen leader.

The good far outweighs the bad in Lincoln, which is a great character portrait by an unexpectedly reserved Spielberg on a subject he very clearly– and understandably– has a fascination with. It seems strange that Spielberg was allegedly emphatic about his film not being released until after the election, because it feels very relevant and modern.  The issue of slavery was a very important debate that deeply affected what kind of nation the United States would be, and Lincoln faced a dramatically divided and impassioned Congress as he fought toward the end result he believed in.  We’re dealing with similarly important issues today, with the perpetual danger of moving backward in a number of social aspects. In that respect, the film feels very topical, and offers a candid and realistic look at the dynamics of creating policies that will alter and, hopefully, improve the nation’s landscape.  I’m sure the delay was based off Spielberg’s desire to not make his movie seem partisan, but after seeing it, I can’t help but think the only people who would take offense to this great film would be those who, like the pro-slavery Democrats on the screen, deep down know they’re on the losing side of the battle.