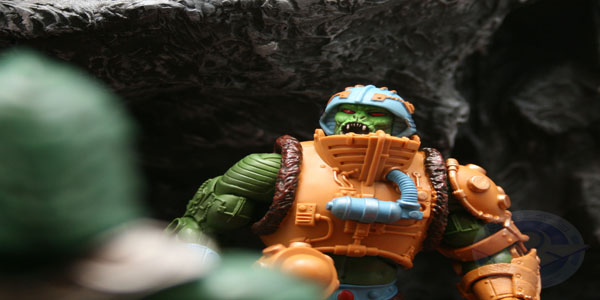 For Masters of the Universe Classics, June has provided us with three first-time action figures for Snake Man-At-Arms, galactic overlord Horde Prime, and Beast-Man’s resilient griffin beasts. While the selection may be comprised of niche characters and variants with more reused tooling than we’d like, I personally enjoy the spirit of these characters and the winning final representation of the collaboration between the company and the consumer. 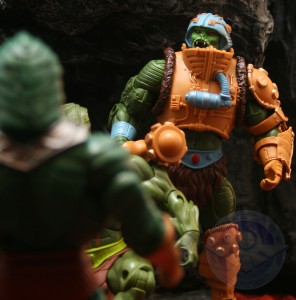 2012 has not been a very good year for MOTUC. They have been plagued with box swapping (Fisto/Sorceress), yet another part-swap fiasco (Stinkor), subscription renewal issues at DR, and now we are faced with even more limited tooling in the interest of keeping the perceived desire of our $20 price tag. Where the other months had failed, June was important in succeeding for many reasons. Let’s cut to the chase: yes, Snake Man-At-Arms suffers as a variant due to zero new tooling outside of a face and a serpent ring. He also has ports on his back for weapons not packed in. And Yes, Horde Prime lost his scepter due to budget. But what we got are the products of imagination, and fulfilled fan desires.

What worked great is that Snake Man-At-Arms was the final collaboration of creative tool usage and clever fandom. I will be the first to admit that if I don’t care for the character, I will miss inaccuracies that I depend on the fans of that character to catch. Some eagle-eyed members of He-Man.org pointed out how teched up his costume is in the 200x series, so the use of Trap Jaw parts were suggested and illustrated. Mattel adopted the change directly due to fan feedback, and while I wanted the old body they originally showed, this is a much better execution of the character, truth be told. It serves to both keep the spirit of the line’s aesthetics intact while really differentiating SMAA from the original Man-At-Arms as a variant. The colors 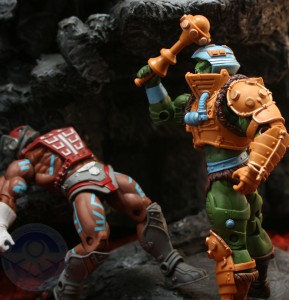 used are show accurate, with gorgeous gold metallic detailing on the armor that Stinkor sorely lacked with his weapons. Even the use of the longer loincloth was a nice touch. As previously stated, the serpent’s ring and the face are the only new pieces, but what was added was well-done. The ring is an Eternian artifact that’s the size of their head, as it was sculpted, and not a prop-replica for human use. While SMAA can wield what appears to be a snake tambourine, it is in proper scale. This variant is also fantastic in that like Bubble-Power She-Ra, he can be plused up. Want your 200x Man-At-Arms not a snake man? Use the old head packed with the original MAA! Not enough you say? Well, due to fan demand, his signature blaster will be coming as a secret accessory packed with an upcoming figure! Knowing there is more to come helps cushion the blow that he has so little in the way of new pieces. I love the customizability option with this toy. If only they would get to Modulok! Modulok, however, is not the Horde member in the spotlight this month. That honor belongs to Horde Prime.

Check back later today for Horde Prime and The Griffin