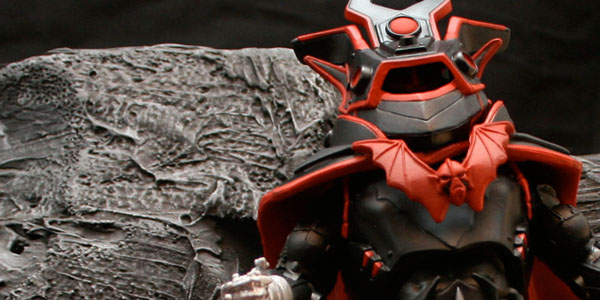 With no definitive representation of Horde Prime’s appearance, the Four Horsemen were tasked with coming up with his new look, while using bucks, as previously done in the old line. 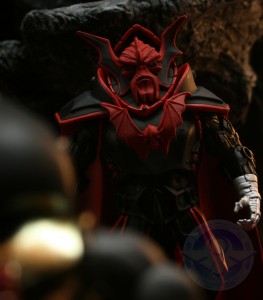 From multiple sources, he appears to be Hordak’s brother, and the resemblance is definitely there.He looks like Hordak with longer ears and longer beard-esque chin. Seeing all of the Horde symbols around his armor using his head is the epitome of ego, with extra “ears” flanking his boots. I am not sure what to make of having one’s own head as the symbol of a repressive regime, but somehow it worked. He does lack paint applications, as noted by several fans, but the omission isn’t as noticeable given all the draping he actually has. His armor, cape, Jack Kirby-like helmet, Filmation-esque gloved, heads, upper boots, and crossbow are all new. Quite a bit of pieces as a former 2012 subscription figure (pushed back due to Shadow Weaver being on the table as an action figure FINALLY). 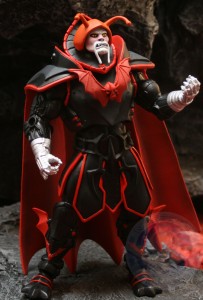 The alternate head is a novel concept, but the colors were all wrong. The ones used are UK comic-accurate, but the orange helmet and pink skin doesn’t work on this particular body in both color and design. If the helmet were painted silver like his hands with his greenish face, he may have worked better for this particular costume.

With the Mighty Spector body, clever part swapping, a reasonably comic-accurate rendition of Horde Prime CAN be achieved! With the cape and the Faceless One’s tunic covering his arms and legs, his mobility is vastly hindered, but I have a feeling he delegates the fighting to his subordinates. For proper zoning however, he can transform his arm into a powerful crossbow, a hallmark for the Horde characters. He will kind of stand there, but unless he’s sitting on a throne that I suspect will never come, he serves his purpose standing there, lording over all he surveys. 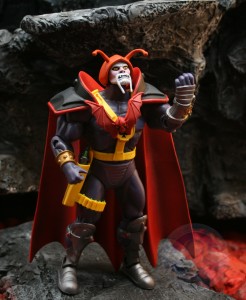 Remember to check out Snake Man-At-Arms in part one, and the Griffin later today