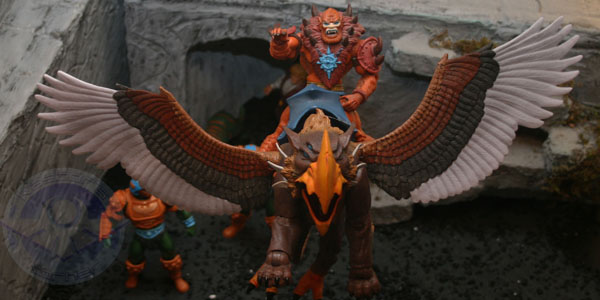 The Griffin rounds out the June offerings in a big way. He is Battle Cat’s body, with a new head, tail, bird-like hind feet, saddle, and upper body piece that houses Swift Wind’s flying wings. With quite a bit of lead time in front of them, fans lobbied for his wings to not be completely one color, as seen on the original prototype. 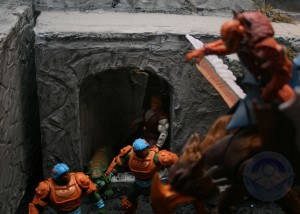 Citing the source material, the wings now transition from brown to gray, as seen in the final toy, and it really saves the beast. Beast Man sits on the saddle about as well as He-Man sits on Battle Cat or She-Ra on Swift Wind. Either the saddles need stirrups, or there needs to be a clear clip to fasten the toy to the back of the saddle.

What we have here are three great toys that highlight both the Four Horsemen’s ingenuity at part-swapping for new characters when given a blank canvas, and how good figures become great figures when the company listens to fan/customer feedback. Honestly, if figures like the Star Sisters, Roboto, Dragon Blaster Skeletor, Sir Laser Lot, and other figures that can be labelled “controversial” upon their introduction, we as fans may have had time to steer the production of these characters in a more favorable direction. It’s the job of the Four Horsemen and Mattel’s design and QC team to put out quality figures. But if it can be said that Stinkor is the symbol of what’s wrong. Snake Man-At-Arms and the Griffin can just as easily be symbols of the fact that they are listening to the fans. Fantastic job, Mattel!

Don’t forget to check out Parts One and Two