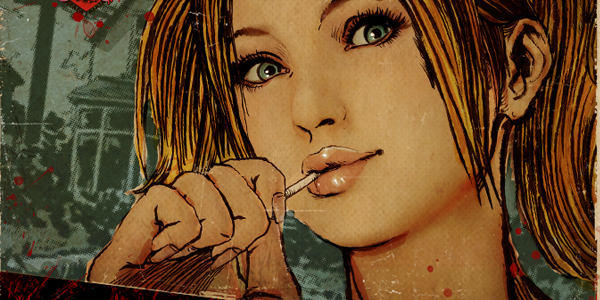 From the twisted minds of game designer Giochi Suda and filmmaker James Gunn, Lollipop Chainsaw may be one of the most ludicrous, offensive, perverse, and downright stupid games I’ve likely ever played through… but it’s also be one of the most fun and entertaining.

It’s a bit difficult to compare this title to any modern gaming experiences because it really harkens back to the heyday of arcades – when games were simpler, built on paper-thin narratives, and only strived to be addicting enough to make players surrender all their quarters into their glowing slots.  I spent the first thirty minutes of Lollipop Chainsaw’s over-the-top campaign asking myself “what were these devs thinking?” until, that is, I realized that I couldn’t pull myself away from it.  It’s truly a one-of-a-kind experience that defines excess and, while it may not be for everyone, you owe it to yourself to give it a try. 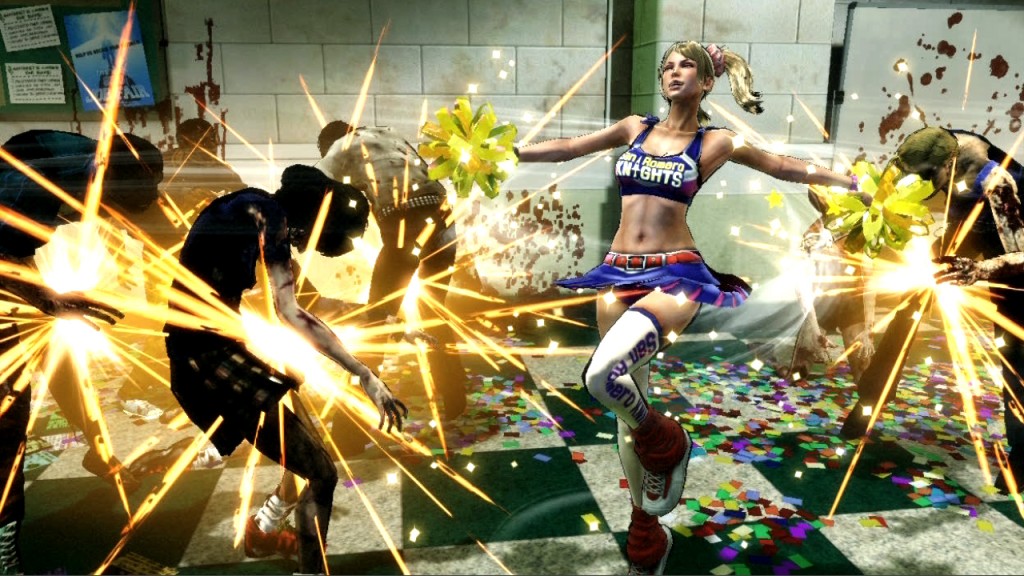 Upon diving into the game, players are introduced to protagonist Juliet Starling (possibly a reference to Gunn’s directorial debut Tromeo & Juliet?), a cheerleader at San Romero High School and master zombie hunter, who quickly finds that her school and much of the town has become overrun with the undead.  She manages to find her boyfriend, Nick, in the schoolyard but he is promptly bitten by a zombie and Juliet must sever his head in order to save him.  Through an apparent magical ritual, she keeps Nick’s head alive and straps it to her belt to provide chatty companionship through the remainder of the game.  Together, they fight through the school to find that Swan, a bullied goth kid, has performed a dark ritual to raise the dead and bring several demonic entities into our realm. 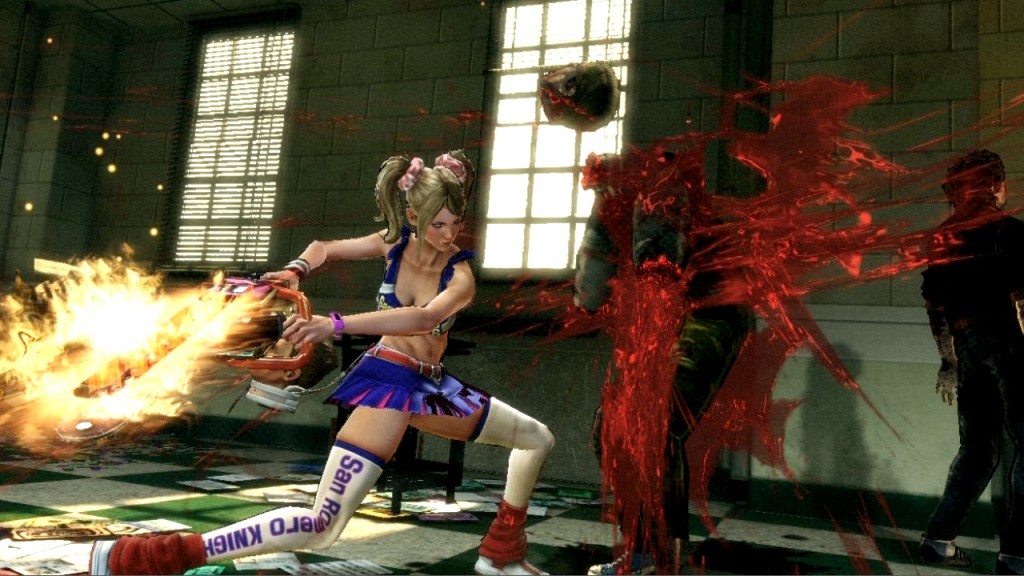 From there, you venture forth to systematically hunt down and slay these abominations (who have taken such forms as a monstrous black-metal viking and a hip rockabilly demon with a transforming motorcycle) after cutting through thousands of mindless zombies.  Thankfully, the combat system makes carrying this out a whole lot of blood-soaked fun.  You have buttons for both high & low chainsaw attacks along with a jump button and a button mapped for pom-pom attacks, which deal low damage but can stun an enemy after landing enough successive hits and make them easier to decapitate.  Many enemies (specifically ones killed in more dramatic fashions) will drop medals that can be spent at storefronts scattered around levels to buy powerful combo attacks, upgraded stats, new costumes, and even artwork & music tracks.  Completionists will find themselves playing through the game many times as one playthrough won’t be enough to net you a fraction of the collectibles this title has to offer.  Killing zombies will also add to your power meter which, when filled, allows Juliet to unleash super-powered attacks for a limited time.  You’ll send dismembered limbs flying left and right all to the tune of Toni Basil’s “Mickey”.  The majority of the soundtrack, by the way, is sensational, featuring tracks by Atari Teenage Riot, Sleigh Bells, Joan Jett, and The Human League. 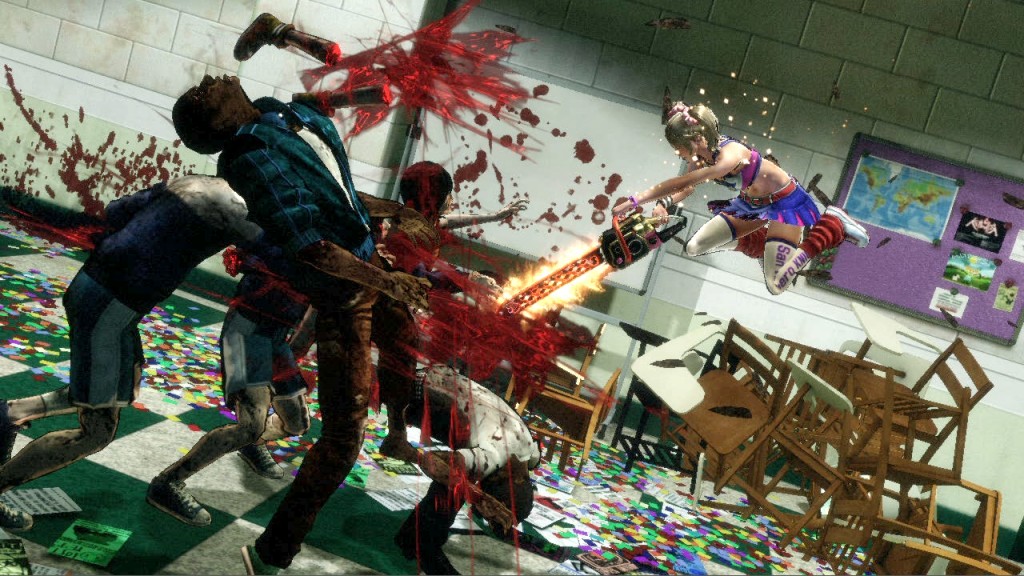 All in all, a single playthrough will take you about five hours but, much in the vein of classic arcade games, this Lollipop Chainsaw is built to be replayed countless times — whether it be to beat your previous high score, outrank your friends on the leaderboards, or earn additional items, this is a game you’ll come back to many times over.  Thanks to the impressive visuals, varied locations, and ever-growing list of new combo attacks to unlock, I couldn’t wait to dive right back in after my first run.  Colors explode off the screen as you hack through zombie hordes; their open neck cavities spewing streams of rainbows while floating hearts and colored flash bulbs erupt all around you — all while a rockin’ tune from the aforementioned soundtrack blares in the background.  It’s an assault on the senses that, at times, can almost border on being too much to take. 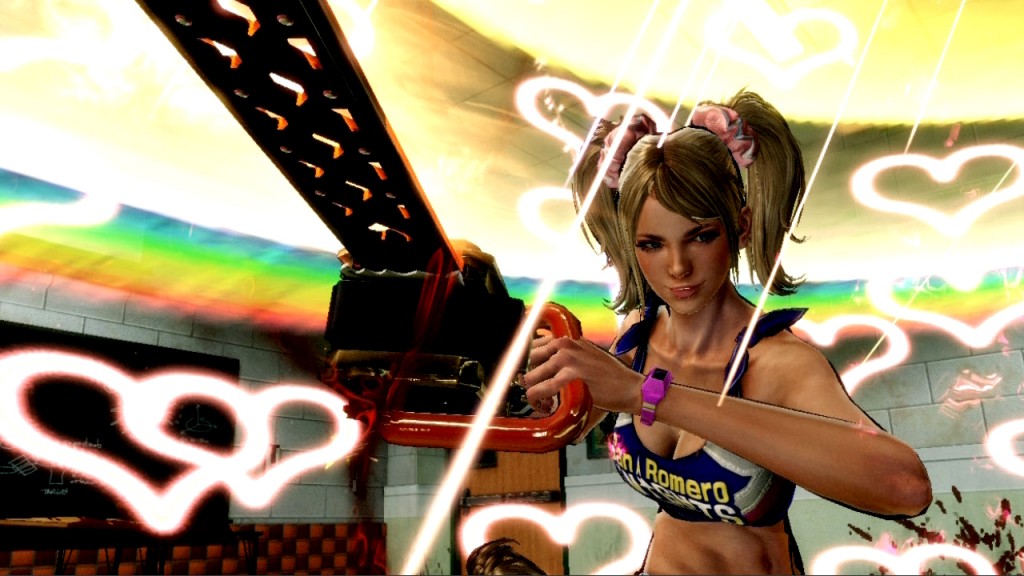 As I said before though, it’s also not for everyone…so people without a working sense of humor may want to steer clear.  There is enough misogyny and foul language present here to make even the most neanderthalistic frat boy do a double-take (while readjusting his backwards, upside-down visor no doubt).  But again, everything here is designed to be excessive and way over-the-top to the point of self-parody.  The game revels in its own silliness and takes you on a wild ride, daring you not to have a great time.  It’s a guilty pleasure, sure, and one that you may hate yourself for loving so much, but in the end it’s an imaginative and wholly original experience that needs to be seen to be believed — Lollipop Chainsaw is now available for both Xbox 360 and Playstation 3. 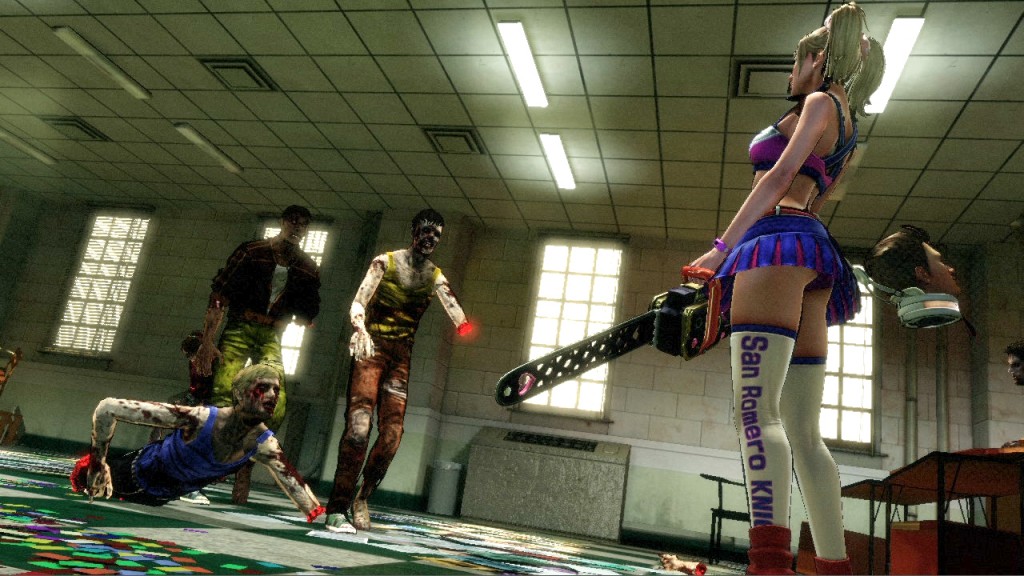