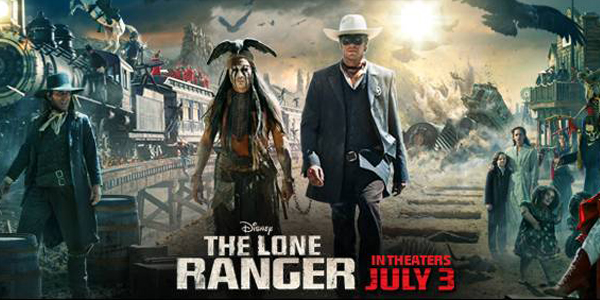 The latest Lone Ranger trailer looks less awful, but is it too late to save this movie’s reputation?

Everything about Disney’s Lone Ranger has looked wrong from the get-go.  The ham-fisted casting of Johnny Depp as Tonto, Armie Hammer’s Lone Ranger allegedly being a Seth Rogen Green Hornet-esque idiot, and some very impersonal and obvious CGI… actually, LOTS of obvious CGI.

But that’s all old news, and the latest trailer suggests some of those fundamental design flaws may have been addressed.  Despite his outrageous appearance, Depp’s Tonto seems much more subdued here, Hammer looks like an actual hero (granted, with strong echoes of Frank Miller’s horrendous live action Spirit), and at least some glimpses of Western landscapes that might not be 100% pixels.

I’m not saying this latest trailer looks good… but it doesn’t look as unwatchable as the last few.  As a kid, I was mildly obsessed with The Lone Ranger, so I’m probably taking the glaring liberties Gore Verbinski and Disney are taking a little too personally, but I will admit this latest trailer makes me feel like I will see this movie.  Likely on Netflix. Someday.

Debate probably doesn’t matter too much, as there is little doubt Lone Ranger will dominate the box office come July 4th regardless… but what do you think?  Are you getting more excited to see it?  Or do you think this movie will be a proverbial train wreck, not unlike the CGI one rendered so expertly in this trailer?