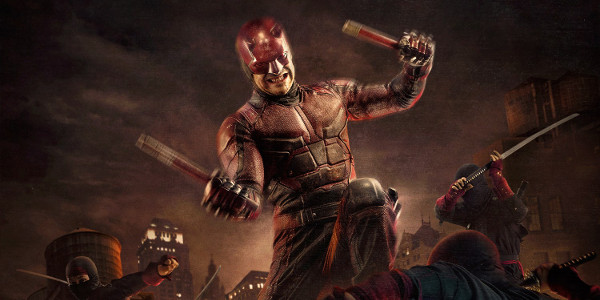 The Devil of Hell’s Kitchen is back for a second season of MARVEL’S DAREDEVIL on Netflix.

Many months have passed since the end of the first season of Daredevil. Daredevil is seen as an urban myth to many people, and they are divided on how they feel about him.  Some like what he’s doing while others see him as a menace who takes the law into his own hands.  Matt however, has embraced the role of Daredevil, doing what he needs to do to keep his city safe at night.

Matt’s personal life isn’t as simple though.  The law firm of Nelson and Murdock is struggling to stay afloat.  Foggy still has many issues with Matt going out every night and risking his life.  Foggy is definitely having a harder time with Matt’s dual identity than Matt is.

Then there is a new player taking on the various criminal gangs and he takes no prisoners.  The police have named him the Punisher, who, unlike Matt, has no problem with killing criminals.  Matt only sees a murderer and vows to take him down.

To complicate things even more for Matt, his ex-girlfriend, Elektra, has come back into his life.  She has her own agenda and is willing to do anything to get Matt to help her.

Without giving anything away, season 2 of Daredevil is pretty good.  The storyline has a good pace to it, so it keeps your interest, but at the same time, it never loses focus, even when the spotlight is on someone other than Matt.

The action sequences are pretty good too.  There’s lots a great choreography going on here. It’s a great combination of boxing, martial arts, and gymnastics.  My favorite is the use of the billy club.  The way it’s used is just right out of the comics.

The Daredevil costume is also warming up to me.  In the last episode of the first season, it was very stiff, but, this time, around, it’s more fluid in movement.  Still not 100% sold, but it’s getting better.

Returning cast members Charlie Cox (Matt Murdock/Daredevil), Deborah Ann Woll (Karen Page), and Elden Henson (Foggy Nelson), just slip back into their roles like a pair of comfortable jeans.  You can just tell that they enjoy playing these characters.

Jon Bernthal does a great job as the Punisher.I would say that his Punisher is very close to the Garth Ennis version. He’s really tense.  Almost this quiet/cool type of vibe coming across.  At the same time, you don’t want to be around when he snaps.  The type of guy that when he walks into the room, you know he takes no crap from anyone.  I’ve seen Bernthal in many different roles.  From comedies to dramas and he’s just a good actor.

Elodie Yung plays Elektra.  Yung’s version of Elektra is more like how she was in the Man Without Fear mini-series by Frank Miller and John Romita Jr.  A real good time girl, with no sense of right or wrong.  Everything is just a joke to her.  Her character is almost more psychotic than the Punisher.  I’m not that familiar with Yung’s body of work.  I’ve only seen her in G.I. Joe: Retaliation, and let’s face it, not that good of a film.  Overall, she really nails the character.

Netflix provided the first seven episodes for this advance review, and I have to say, I can’t wait to see the other six episodes because it just ended on a cliffhanger.

Season 2 is really shaping up to be as good as season 1.