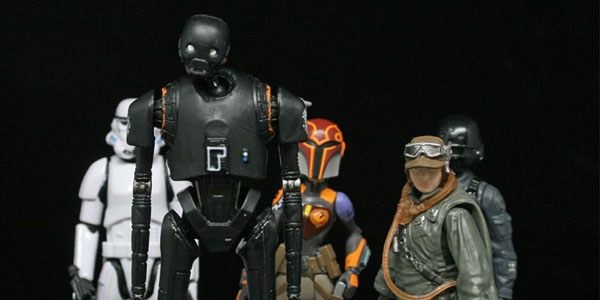 The first wave of new Star Wars figures from Hasbro welcomes Rogue One to the plastic galaxy.

We know this year’s #ForceFriday event won’t be as bountiful as the big splash last September in advance of Star Wars: The Force Awakens, but– based on the first wave of 3.75″ action figures from Hasbro– what the Rogue One line will lack in quantity, it will more than make up for in quality, because these are some fantastic figures. 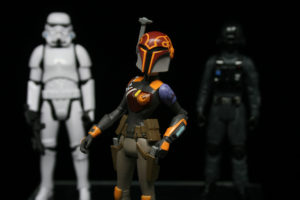 The new wave includes seven figures, most based on Rogue One, the first “Star Wars Story,” along with some additions to the animated-style Rebels sub-line, and a repack of Kylo Ren in shiny new 2016 packaging.  The Rebels figures are nice, including a new Kanan in Stormtrooper disguise, as well as a new Season 2 Sabine Wren, who outclasses the previous release in every way possible.  Not only is the new sculpt packed with more detail than the last Sabine, she now sports more intricate paint apps to highlight her colorful armor, and– most importantly– a removable helmet.

But while the Rebels figures are cool, Rogue One is clearly the main focus of this new assortment.  We start off with an interesting mix of characters, including our new hero Jyn Erso in her Eadu rain gear (she’s heavily packed, too, an obvious and welcome response by Hasbro to last year’s #WheresRey controversy), K-2SO, a new Stormtrooper, and an Imperial Ground Crew troop builder.

The sculpting on these figures is exceptional, with an incredible amount of detail and excellent likenesses across the board.  Even the Stormtrooper, a character we’ve seen released a ton of times, really shines with an incredibly accurate and rich sculpt, one of the best I’ve seen based on the Imperial soldiers’ classic look.  The Ground Crew is a new design, but fits in perfectly with the Imperial aesthetic, and I quite like his accessories, a pair of electronic flares which he can hold or store on his back.  Part of me is confused we’d get an obvious sideline character like this so early, before Hasbro has even announced about half of the film’s squad of heroes, but he makes for a cool looking figure regardless. 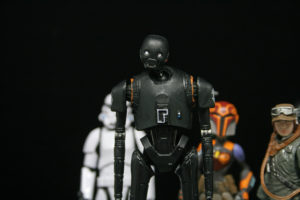 K-2SO is great.  He’s delightfully tall, and his odd proportions are well represented in toy form.  He’s another great design which fits seamlessly into the Star Wars universe, and he’s incredibly toyetic.  While he’s not super articulated, K-2SO does get some unique moving pieces due to his overall design, including ball hips and a double jointed neck.  This guy’s paint work is also phenomenal.  What could have been a sort of dull, all black design comes to life thanks to the silver scoring on the droid’s arms and legs, which adds depth and realism to the figure.

Rounding out the lineup is Jyn, and it’s cool that Hasbro opted to release a unique version compared to the Jedha-based Black Series figure.  The smaller scale Jyn features a very nice portrait of Felicity Jones beneath her (non-removable) helmet, and her poncho is well designed, composed of soft enough rubber to still allow for movement in her hips.  The Rebel gets extra points for including a working holster for her blaster, always a nice touch. 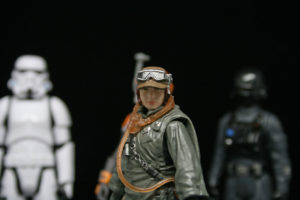 Since the 3.75″ toy line is targeted toward kids, these figures also include some kid-friendly gimmicks, one of which is pretty meh and the other which seems quite clever.  The more basic gimmick are action feature accessories, which will obviously not be seen on the big screen this December.  From Jyn’s missile launcher to the Ground Crew’s flight pack, these pieces will join all those Build-A-Weapon pieces from The Force Awakens line.  The one fun feature is the Stormtrooper, who includes additional chest armor which can give your trooper battle damage or an orange shoulder paldron.  While the end result of this armor is a bulkier figure, it’s a really fun concept that is remarkably playable.

Speaking of playable, we also get a second play feature, a download code for a new app called Hasbro Star Wars StudioFX. This app allows you to create videos featuring your Star Wars toys and then add a variety of special effects after you record.  It’s a brilliant way to marry traditional action figures into VR/ AR digital toy world, and I can see this concept really taking off with both kids and adult collectors.  I can’t wait to start making some videos, I know that much.

The first wave of Rogue One action figures will be released on Friday September 30th, along with the launch waves of The Black Series, new vehicles, figure two-packs and more.  Check back on Force Friday for a look at more Star Wars Rogue One toys. 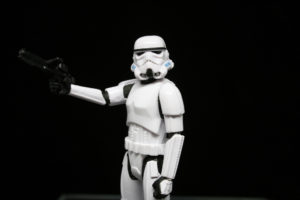 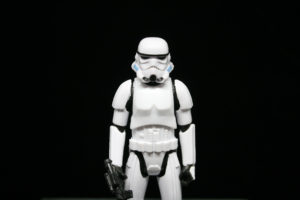 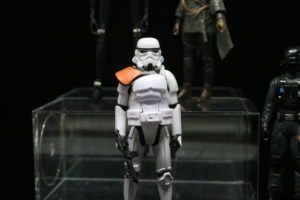 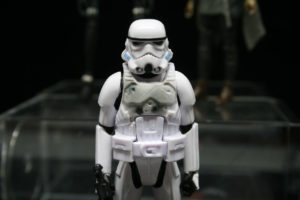 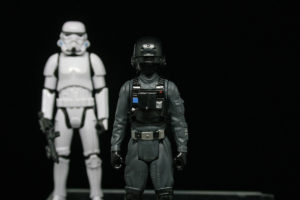 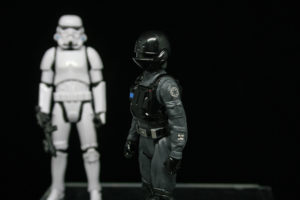 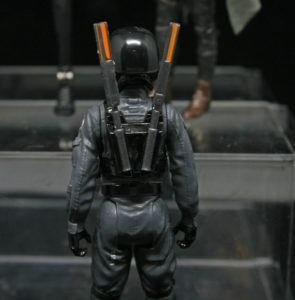 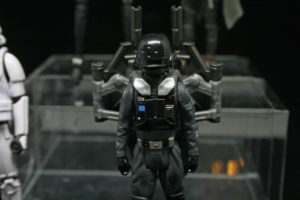 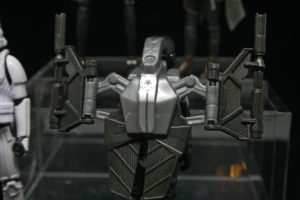 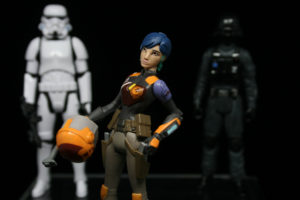 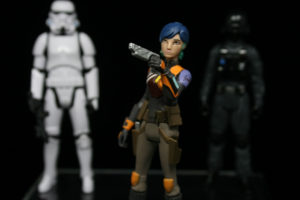 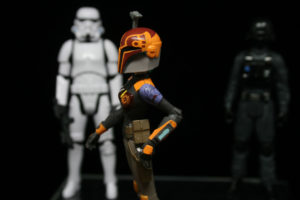 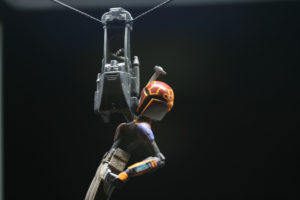 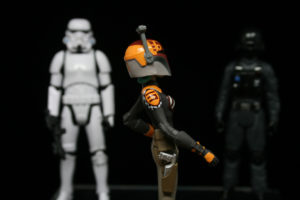 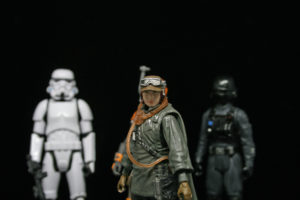 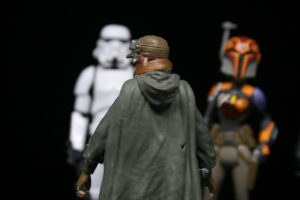 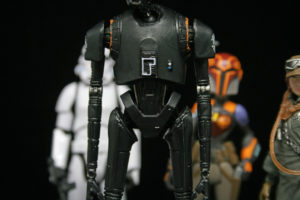 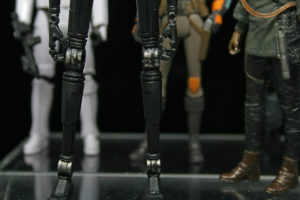 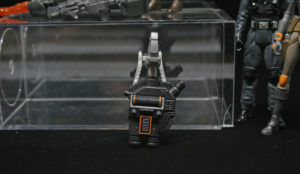 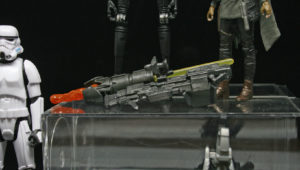 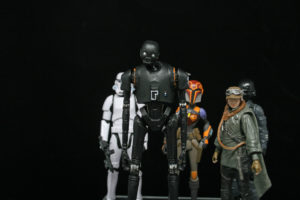 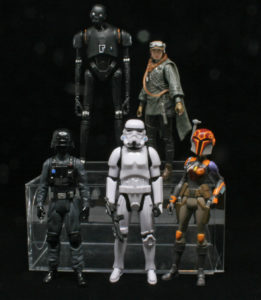