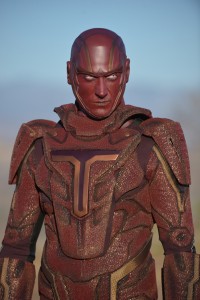 Goldberg’s character is described as follows,  “RED TORNADO is the most advanced android the world has ever seen.  Designed by scientist T.O. Morrow for the U.S. Army as the ultimate superweapon, he soon becomes sentient, posing a grave danger to National City — including the people Supergirl cares about most.”