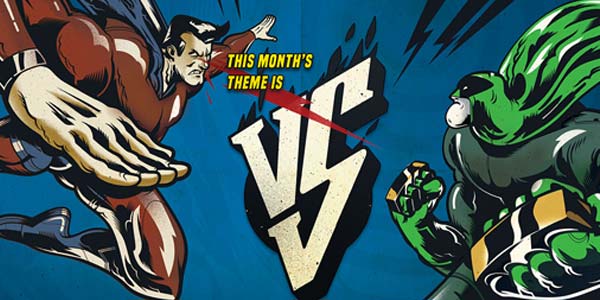 March’s Loot Crate will celebrate Batman vs Superman, and promises to offer a great look back at the biggest face-offs in the history of geekdom.

I love Loot Crate.  That may be the least-controversial statement I’ve ever written, because, c’mon– we all love Loot Crate, right?  The subscription service has been refining their style for years now, cultivating month after month of cool (often exclusive) collectibles ranging from t-shirts to toys and anything else you didn’t know you needed in your life until you discover it in the latest Crate unboxing.

And now they’ve revealed the theme for March’s box– VERSUS.  The timing on this couldn’t be better, with Batman vs Superman: Dawn of Justice set to hit theaters at the end of the month.  But the crate will also feature items based on some other infamous conflicts, such as Alien vs. Predator, and Daredevil vs Punisher… just in time for the Netflix debut of Daredevil Season Two!

Loot Crate went both state of the art and old school with their March announcement, releasing a really cool 360º video, which is a fan homage to Predator vs Colonial Marines.  Check it out below:

The geek landscape has grown in such a scope, it can be tough to keep up with everything going on.  That’s what makes Loot Crate extra special– month after month, their Crate taps into the most current developments of the super hero, sci-fi, horror and gaming genres, while also paying tribute to the greatest moments in pop culture history which got us here.

If you’re already a Loot Crate subscriber, good for you, and welcome to the club!  If not, seriously– at less than twenty bucks a month, this is the perfect way to amass a collection of the coolest collectibles you’re likely to come across.  If you want in on March’s VERSUS Crate, sign up here between now and March 19th.  I think this month’s loot is going to be particularly awesome, so don’t miss out!