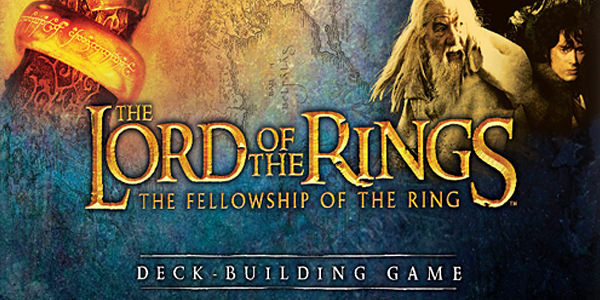 We sat down with the newly released Lord of the Rings Deck Building Game and had a blast — read on to check out our impressions.

One of the most anticipated titles from game publisher Cryptozoic, The Lord of the Rings: The Fellowship of the Ring Deck Building Game, is one I approached cautiously.  On one hand, their most recent deck builder, which was released late last year and themed around the DC Comics Universe, was outstanding and structured around a similar version of their “Cerberus” Engine.  The difference though, is that the source material for DC is much more open and expansive, giving the game designer free reign over the content and mechanics of the package.  Working with the license for the Fellowship of the Ring film is not only more restrictive in terms of card artwork (as you are really limited to one source to pull from) but also in that it follows a strict narrative.  Therefore, the designer has the challenge of thematically connecting the film to the physical gameplay which, in a deck building game, is a difficult task.  Thankfully, they did a remarkable job in tying everything together and offering a unique, exciting experience that will likely please both fans of the films and the gaming community alike.

Before I go further, for anyone unfamiliar with how a deck building game works, I’ll give a brief overview – for those who do, feel free to skip this paragraph entirely.  Essentially, each player begins the game with his or her own deck of cards, all of which are typically identical.  Using this starting deck, which contains resource-generating cards, you will draw a hand each turn which allows you to purchase additional cards from a common supply.  These cards may offer helpful effects when played or give the player a larger amount of said resource.  Any purchased cards go into your discard pile along with all the cards you had played that turn and you draw up a new hand from your deck.  Once your deck runs out of cards, you shuffle your discard pile, which includes all the great new cards you obtained on previous turns, and it becomes your new draw deck.  As you keep playing, your deck will become more and more formidable, allowing you to continually purchase better cards that could not be obtained earlier, hence the name deck building. 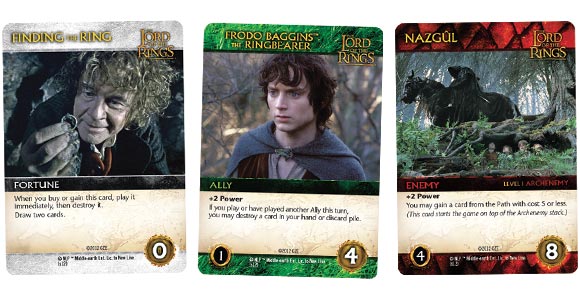 So what does the LOTR DBG do well and how does it distinguish itself from the crowded market?  Well for starters, Cryptozoic really likes to publish streamlined products.  While the game isn’t necessarily targeted towards casual gamers, it can certainly be picked up and enjoyed by pretty much anyone in your gaming group.  Instead of bogging down newcomers with rules and several resources to juggle, it takes a very direct approach to the game which can be learned in minutes.  Each player begins with six “courage” cards (which generate +1 Power, the one and only resource in the game) and three “despair” cards, which offer no positive effects and serve only to occupy space in your hand.  You will typically be trying to find ways to remove despair cards from your deck early on as to not dilute your hand.  Those very familiar with this family of games will notice that only accounts for nine cards, instead of the common ten.  The tenth card is actually character-specific and allows each player to play the game with one item that is exclusive to them.  Character cards are drawn randomly at the beginning of play, similar to the DC Comics DBG, and include likenesses of Gimli, Aragorn, Legolas, Frodo, Samwise, Gandalf, and Boromir. Unlike the DC heroes which granted ongoing abilities to use each turn however, these character cards simply advise you which piece of equipment you may add to your starting deck and, aside from aesthetics, to not otherwise play into the game.  This gives players one less thing to keep track of, as you can only use this boon when it is drawn from your deck, while keeping the game thematically sound.  For example, Sam begins each game with a card called “Samwise’s Bravery” in his deck which grants +1 Power, plus an additional +1 Power for every five cards currently in the player’s discard pile, which can be quite helpful late in the game once everyone’s deck have filled out.  Frodo, of course, starts with the One Ring, a +2 Power card with an interesting mechanic – you may reveal it to avoid an attack or ambush effect (more on these in a bit) but run the risk of gaining a “corruption” card.  This was a neat way to tie in the ring-bearer’s ability to slip into invisibility as well as the ring’s seductive power over the one who wears it. 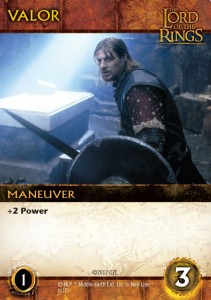 The main deck sits next to and is used to fill “The Path” of five cards in the center of the play area which consist of several card types, all denoted by colorful backgrounds.  Artifacts, maneuvers, enemies, and allies will all come into play and grant a variety of bonuses, some of which were refreshingly new to me.  Pipeweed, for example, is a very inexpensive card that grants +1 Power when played and is then placed into the discard pile of the player to your left — again, a neat way to really bring the theme of each card into play.  Some other artifact cards, such as the Elven Brooch or the iconic blade Sting bring in familiar “quest” mechanics, such as granting bonus points if, at the end of the game, you have five or more of a certain type of card in your deck.  Location cards depicting memorable areas featured in the film such as the Mines of Moria and Rivendell have purple borders and will stay out in front of you once you play them once, granting their ongoing effect each turn.  Three smaller piles located next to The Path consist of Valor cards (a slightly stronger version of your starting Courage cards which grant +2 Power), the Archenemy pile, and the Corruption deck.  Archenemies are slightly randomized, with only the first and last foe being constant for each game, and stacked in descending order by their level.  This guarantees the foes will be increasingly difficult to defeat but offer exceedingly better rewards as you progress.  It likely won’t be until about halfway through a game that players will be powerful enough to deal with these villains but, when they do, it adds another layer onto the game. 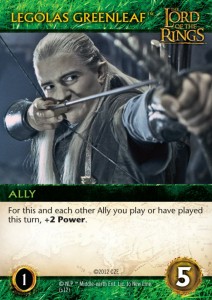 After defeating the Nazgul (who always is at the top of the Archenemy deck) each successor to be revealed has an ambush effect which attacks all players.  If you cannot defend against this assault with a defense (many cards will offer a defense as their primary or secondary effect to allow you to avoid such effects) than you suffer whatever the foe has in store for you – from forcibly discarding your entire hand to pulling several Corruption cards into your discard pile.  These Corruption cards, featuring a perfect shot of an elderly Bilbo holding the one ring while looking on with a suspiciously devilish demeanor, clutter your hand similar to the starter Despair cards, but also count as a negative victory point at the end of the game.  Each card has a victory point number listed at the bottom and the total of all the victory points in your deck will give you your final score.  Also, in the same way that Archenemies like Saruman and the Balrog attack the group, standard enemies such as Uruk-Hai and the Moria Orcs reside in the main deck and will ambush only the player who is about to begin their turn when they are revealed into the center row.

In addition to the ambush mechanic, one thing I really loved in the LOTR DBG was the addition of fortune cards. Printed with a white border, there are precious few of these scattered throughout the deck and it was always a joy to see them come into play…unless it wasn’t my turn – then I was cursing the name of whoever got lucky.  These cards simply represent a stroke of good luck and give you an extra advantage on your turn, should you decide to use it.  They are zero-cost cards that may only be used once, during your turn, and then immediately destroyed (placed into the center deck’s discard pile, out of play).  Just to give you an example, “Raging River,” which as you may have guessed depicts the scene in which Arwen attacks the Nazgul at the Ford of Bruinen, gives a player an extra +3 Power for their turn and then is removed from the game – super simple and another cool way to keep everyone engaged.  And while some people curse that kind of random, Ascension-like approach to deck builders, in each game I’ve played the final score tally has been extremely close.  All the mechanics at play here really do work well together and balance the game nicely. 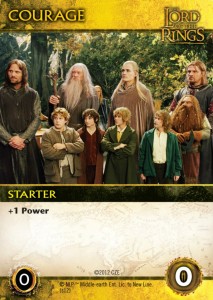 For gamers you enjoy a grueling experience and may consider this too “light” of a game, the designers also addressed this by including “Impossible Mode” Archenemies.  Impossible Mode tweaks the rules very slightly and features enemies that are brutally difficult.  They also will attack you with different ambushes than they would in the standard game, which are liable to really hurt if left undefended.  Not only will you and your group need to master the game, you’ll need to have a bit of luck on your side as well.  I have to say, I’m really glad that they included this for players looking for a great challenge – just by going the extra mile to include twelve additional cards, they added a lot more value to the package.

Regarding the components themselves, the cards look great and are on quality stock.  Whoever was tasked with searching through hours of film for the perfect frame did an admirable job as I really dig the shots they selected to represent each card.  The borders for each card type pop with color which makes it easy to distinguish the different card types.  It also helps that they clearly understand what fans what, and deliver it without pandering to conspicuously – yes, there is totally a “One Does Not Simply Walk Into Mordor” card featuring a distressed Boromir which I just love and, of course, the game wouldn’t be complete without the obligatory “You Shall Not Pass.”  Even the backs of the cards feature a rather attractive illustration of a Middle Earth map.  Overall, this is an extremely solid package and one that is bound to resonate with the LOTR fan base and gamers alike.  It’s simple enough that basically anyone can get up to speed and play with little explanation but challenging enough to keep the hardcore crowd engaged.  I really enjoyed each of my sessions with this one and look forward to seeing what else Cryptozoic has in store for the Cerberus engine, which has proven to be a winner.