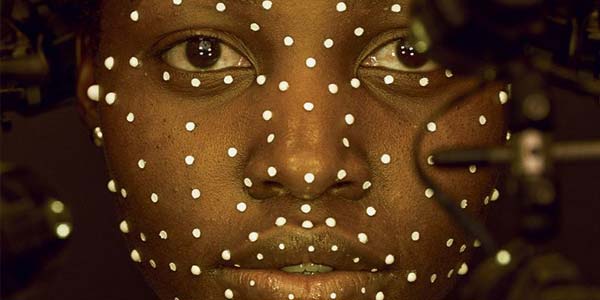 The Oscar winning actress will go mo-cap for The Force Awakens.

Another of the big reveals to come out of Vanity Fair’s feature on The Force Awakens photo session by Annie Leibovitz is a portrait of Lupita Nyong’o’s face, covered in the now-familiar motion capture readers.  This confirms that Nyong’o’s character will be CGI in the final film.

The picture’s caption offers an even more direct reveal– her character’s name is Maz Kanata, and she’s a pirate.  She also owns a castle, and it’s inhabited by this lot:

I don’t know about you guys, but I am loving this.  Abrams really nailed the visual aesthetic of Star Wars, as I was confident he would.  How successful this new movie turns out will still come down to the quality of the story being told, but regardless, I think it’s safe to say we are in for a gorgeous looking movie.  With a CGI Lupita Nyong’o, no less!

Both of these photos are by Annie Leibovitz.  Click Here to see more of her The Force Awakens portraits.